“My background is as a designer/musician,” said Hiro Ogura, CEO of Voiz LLC, talking about his AiRadio Duo VR-80. “Since I was a boy, I loved building my own radio with a good speaker. But I did not like FM broadcasting’s compressed sound and noise and unstable signal condition -- but finally Wi-Fi radio solved the problem.” The AiRadio Duo VR-80 will fulfill many buyers’ needs, and will look gorgeous while doing so. You’ll have to balance your own needs and desires against its somewhat high price of $299 USD, and I have a few nits to pick -- but the VR-80’s superior sound, tuned by Andover Audio’s Bob Hazelwood, is certain to win you over.

The box is colorful, with lots of pictures of the AiRadio Duo VR-80 and a lot of technical information -- with some glaring omissions listed below. 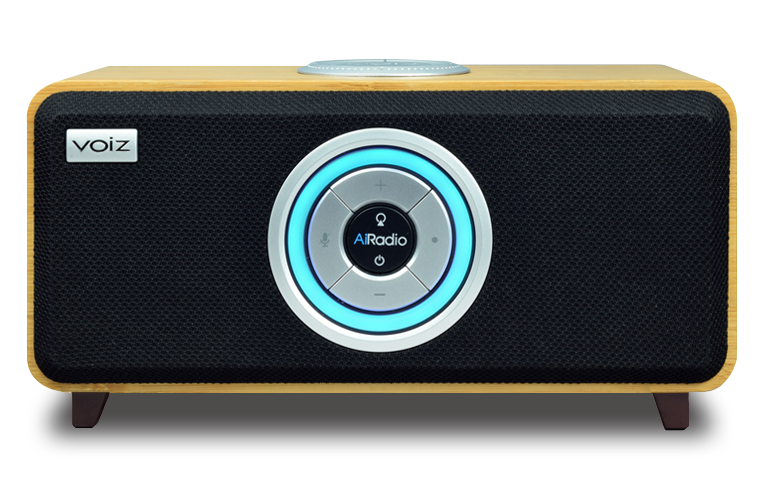 Inside are the AiRadio itself and its AC cord and power adapter; a short 3.5mm-to-3.5mm audio cable and an owner’s manual. The manual includes excellent diagrams and explanations of the AiRadio’s functions, as well as a list of required ancillary gear that should be printed on the box’s exterior, so you know what you’ll need right from the start: a Wi-Fi router that supports the 2.4GHz and 802.11 b/g/n bands (5GHz is not supported); and a smartphone or tablet (I used an iPod Touch) connected to a Wi-Fi network and compatible with iOS 9.0 or higher, or Android 6.0 or higher.

The AiRadio Duo measures 12”W by 6”H by 6.1”D and weighs 4.2 pounds. A beautiful veneer of bamboo is laid over medium-density fiberboard (MDF). Its light weight aside, it feels very solid, but you wouldn’t want to treat it roughly and risk marring the bamboo finish, though I imagine the electronics would survive. Voiz describes the grille that covers nearly all of the front panel as “natural,” whatever that means; also available is the AiRadio Duo VR-80B -- identical in every way, including the price, except that its grille is black. The AiRadio’s overall appearance is retro. 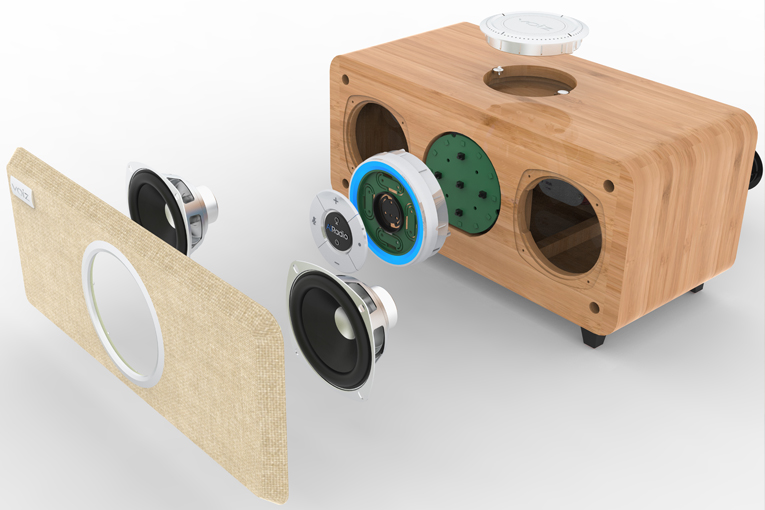 At the center of the grille is a large, circular control panel of plastic that’s made to look like metal. It reminds me of Iron Man’s Arc Reactor, which keeps his heart beating. On this panel are buttons for power/mode (Wi-Fi, Bluetooth, Aux), microphone mute, volume up and down, and Alexa -- push the last, and you can call up the virtual assistant without having to speak its name. A ring of LEDs near the panel’s outer circumference blinks when Alexa is asked something, blinks blue during Bluetooth pairing, and glows a steady green when the Aux input is selected. The ring goes dark when you’re listening in Internet or Bluetooth mode, but remains lit as long as Aux is selected. In the grille’s upper left corner is a small badge bearing the Voiz logo -- a pity, as it spoils the front panel’s otherwise symmetrical design.

On the AiRadio’s top panel is another, smaller disc of faux-metal plastic -- the farfield microphone. On the bottom, the AiRadio sits on four little angled feet -- very 1950s.

Low on the rear panel are two round ports for bass enhancement. Between these is a recessed bay containing the AC connector jack, and 3.5mm jacks for plugging in auxiliary devices and headphones. It’s all simple and sweet. 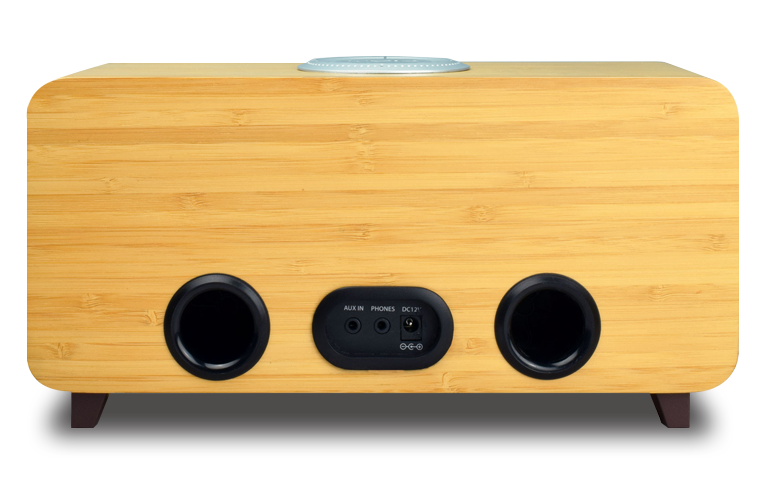 The AiRadio Duo VR-80 is specified to support the Wi-Fi standards of IEE 802.11 b/g/n and Bluetooth 2.1 Enhanced Data Rate (EDR). Its two 4-ohm, 3”, front-firing “full-range” drivers have oversize neodymium magnets, and are driven by a stereo amplifier with a maximum power output of 10Wpc. The AiRadio has a specified sensitivity of 81dB and is warranted for one year.

I marveled at how easy the AiRadio Duo VR-80 was to set up. Download the free Voiz app and follow the prompts to connect the radio to your Internet network. From then on you can use your device as a remote control. You can select a streaming service to listen to (Amazon Music, iHeartRadio, Spotify, Tidal, Napster, and Qobuz), though most of these require a paid membership. Voiz’s free app, called TuneIn, gives you access to thousands of Wi-Fi radio stations. I had so much fun browsing various countries’ jazz stations that I had no idea I’d spent hours doing it.

You can use that same screen to search, keep lists of favorites, and listen to My Music -- the music you’ve stored on your device. You can sort My Music by playlist, song, artist, or album. The screen for the title you’re listening to offers the usual play, pause, and previous/next functions, and the album’s cover art is displayed in the center of a circle made to resemble a 45rpm single -- a neat idea, but the circle and cover constantly rotate, which I found mildly irritating. (Evidently, there’s no way to turn this off.) You can use the app’s Multi-room mode to simultaneously stream to multiple AiRadios. 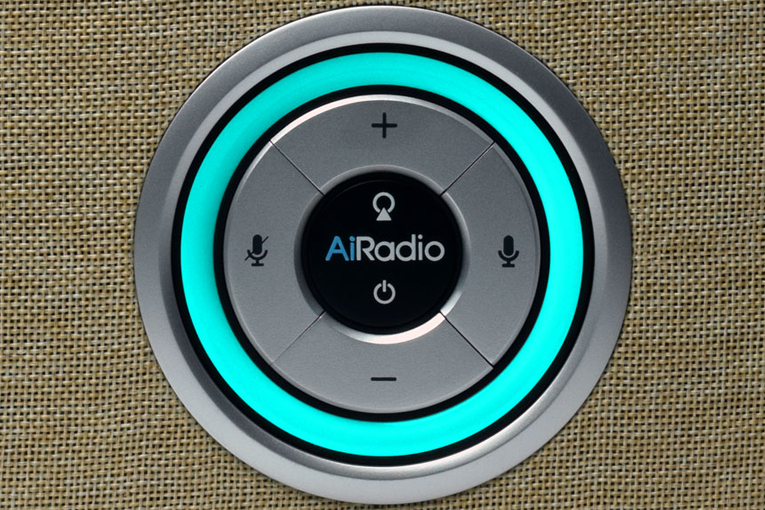 I had a little difficulty with the AiRadio’s headphone jack. When I plugged in my Audio-Technica ATH-MSR7NC headphones, the AiRadio’s speakers did not automatically shut off, as is SOP. Voiz CEO Hiro Ogura assured me that the speakers should stop operating when headphones are plugged in, and that the review sample’s jack must be defective. As far as I could tell in these unusual conditions -- I was hearing music simultaneously through the Voiz’s speakers and my headphones -- the AiRadio’s headphone sound was acceptable. The clear midrange had presence, and the highs were never strident. The bass was a bit harder to judge -- the bass from the speakers was of course still audible -- but seemed solid enough. Though it made headphones useless for private listening, the glitch was actually pretty nifty with some music -- the ’phones provided the mids and highs, the AiRadio’s speakers the thumping bass. But, as I said, I was assured that this is not normal behavior.

Bluetooth worked fine, but I found I didn’t really need it -- Wi-Fi sounded much better. And when I used Wi-Fi, distance was never a problem -- I could use the Voiz app anywhere I could use my network.

A word of warning about the music services supported: You’d think that every one of them would by now offer gapless playback, but many still do not. Before you spend your money, get a trial subscription or inquire. Otherwise, you’ll probably end up hearing gaps between tracks in recordings in which the music should be seamlessly continuous.

For its size, the Voiz AiRadio Duo VR-80 was one of the best-sounding radios I’ve heard. There was plenty of everything, all in good balance except for the very slightly boosted bass. Two things that were remarkable about the AiRadio were its stereo imaging and treble balance. When I sat in front of the AiRadio, I heard a convincing stereo soundstage that often extended far past the radio’s right and left side panels, as well as several feet behind the front panel. When I closed my eyes, I had trouble believing that all that sound was coming from a little box only 12”W x 6”H. The treble was sweet and never harsh, unless the recording’s highs were. Add to this a rich, defined midrange, and bass that was not only ample but had great focus, and the overall sound was very appealing.

“Eleanor Rigby,” from the Beatles’ Revolver (16-bit/44.1kHz ALAC, Parlophone), was effectively stirring, George Martin’s arrangement for double string quartet stretched across the front of the soundstage and Paul McCartney’s lead vocal just outside the radio, to the right. Later in the album, “Yellow Submarine” had very solid bass through the AiRadio Duo, while Ringo’s drums were to the left, imaged outside the radio with plenty of presence and punch. The nautical sound effects in this track imaged from left to right, each precisely positioned in space. 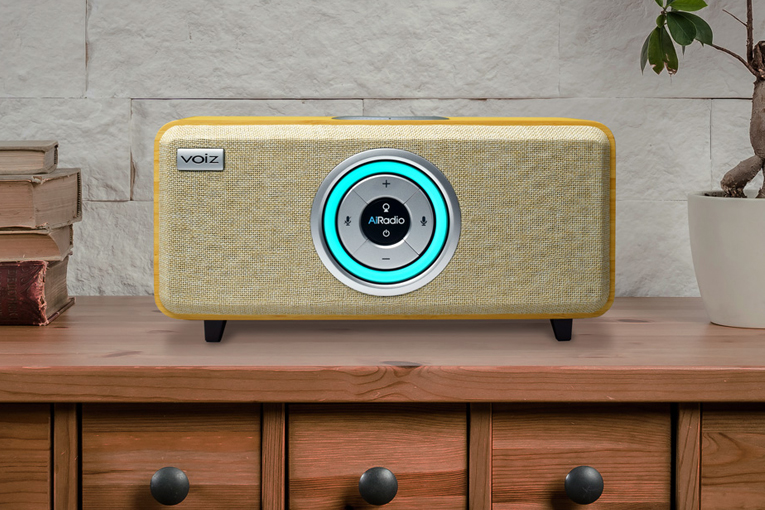 “Summertime,” from the Zombies’ The Decca Stereo Anthology (16/44.1 ALAC, Big Beat UK), has a lush sound, with rippling guitars, a prominent bass line, and sometimes delicate percussion. This all came through intact via the AiRadio Duo VR-80, Colin Blunstone’s lead vocal having great presence, and the bass was solid, with good weight.

One of the very best recordings of Brahms’s towering Piano Concerto No.2 -- pianist Emil Gilels accompanied by Eugen Jochum conducting the Berlin Philharmonic (16/44.1 ALAC, Deutsche Grammophon) -- has a perfect balance of drama and lyricism, and the DG engineers recorded it in first-rate sound. It sounded splendid through the AiRadio Duo VR-80. The strings were sweet yet with proper weight, the piano was clean and bright, and the tonal balances were perfect. The soundstage through the Voiz was a bit narrower than those of some other recordings, but was nonetheless very deep -- surprising from such a small device.

The AiRadio Duo VR-80 should especially appeal to those who listen to many different genres of music -- it sounded great with anything I played.

If you meet the requirements listed at the top of this review, like to listen to Internet Radio, and want the music stored on your device(s) to sound absolutely great, the Voiz AiRadio Duo VR-80 might be just the thing for you. There are a couple of tweaks I might want, but that’s very subjective -- and any doubts disappeared as soon as I heard the Voiz. Even so, at first I wondered if the price might be a bit high. Now, having lived with it a few weeks, I no longer think so -- it might even be a bargain.