Having reviewed many Bluetooth speakers, I’ve found that my experience of them falls into categories. From unboxing to setup to use, I’ve found some that were interesting, some demanding, some surprising, and a few that left me perplexed. Only a few of those experiences were joyful, but one of them was the Kanto TUK ($799.99/pair, all prices per pair, USD), which I reviewed in August 2019. Kanto also has a line of smaller, much cheaper Bluetooth speakers, the YU models, each of which looks promising: the YU2 ($219.99), YU4 ($329.99), and YU6 ($399.99). Now Kanto has introduced a scaled-down version of the YU4 with the most basic of model names: YU ($249.99/pair). Have they got it right again? 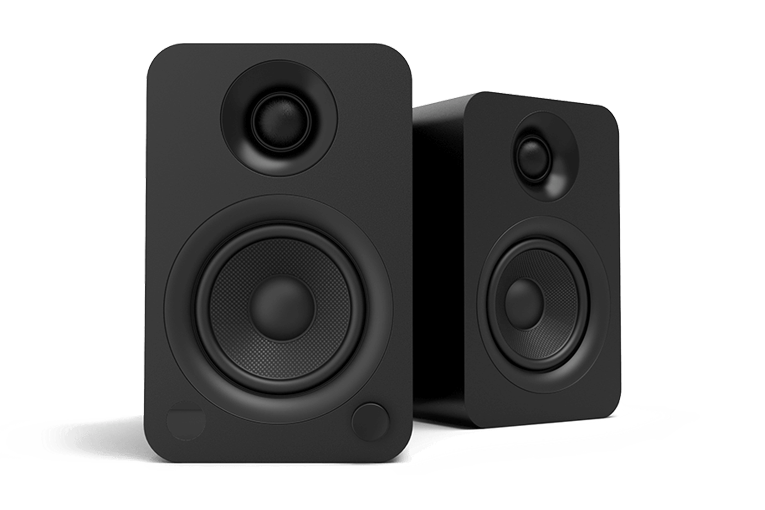 Some speakers have proven a real challenge to unbox. I mean, a box should protect its contents -- it shouldn’t be one of the Chinese puzzle boxes I’ve had to figure out over the years. But unpacking the Kanto YU was easy. It comes in a brown cardboard box, inside which is a cardboard-and-foam packing block with two holes in which to insert two fingers. No prying or prodding required -- just lift it off. That reveals the speakers safely nestled within, to either side of a smaller brown cardboard box containing their accessories.

In that inner box are a remote control, its two AAA batteries, eight self-adhesive feet, a power cord, a 16’-long speaker cable, and three 12-page user manuals. Rather than cram several languages in small print into one manual, Kanto supplies separate booklets, one each in English, Spanish, and French. The English one, at least, is very good -- easy to read, with diagrams big enough that I didn’t need a magnifying glass.

Each YU measures 8.7”H x 5.5”W x 7.5”D. The left-channel speaker, containing all the electronics, weighs 6.1 pounds; the right-channel speaker weighs 5.2 pounds. Unlike the YU4, which is available in eight different colors, the YU is offered only in Matte Black. The cabinet construction -- plastic veneer over wood -- has a very solid feel. With the felt feet affixed to the bottom of each speaker, there was no way they were going to walk the plank of a bookshelf or tabletop while playing bass-heavy music. 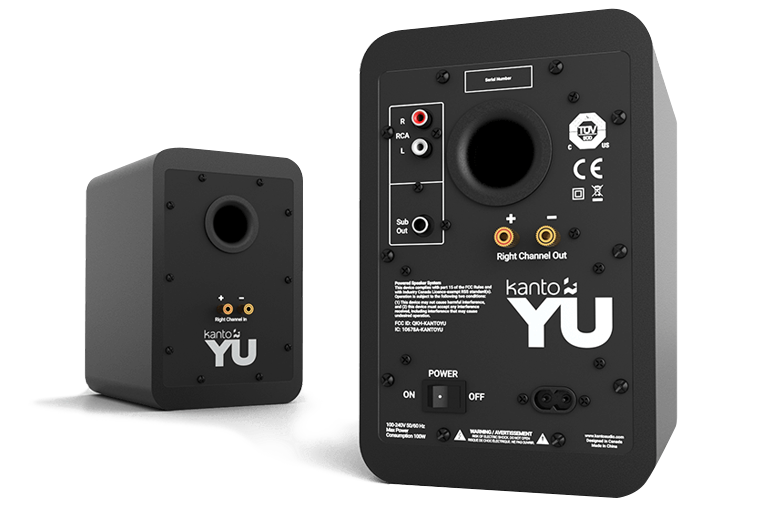 On the rear panel of the left speaker are the master Power rocker, left and right analog input jacks (RCA), a subwoofer output (RCA), binding posts for the speaker cable to the passive speaker, an inlet for the power cord, and a port; on the back of the right speaker are only the binding posts and port.

Mounted on the front baffle of each speaker is a 1” silk-dome tweeter crossed over at 2kHz to a 4” midrange-bass driver with a Kevlar cone. These drivers are fully exposed; the YU models have no grilles, and I was told that Kanto doesn’t plan to provide any. In the lower-right corner of the left speaker’s baffle is a small knob with which to control volume, input selection, standby, and wake-up. In the bottom-left corner is a round, recessed button containing three LEDs: white for Power On/Playback, yellow for Standby (solid) and Mute (blinking), and blue for Bluetooth Discover (flashing) and Paired (solid).

But it’s Kanto’s thoughtfully designed remote control that you’ll most often use. It provides the usual buttons for volume up/down, mute, play/pause, and previous/next (the last active only in Bluetooth mode), as well as some useful features not usually found on remotes: pairs of buttons for Bass +/-, Treble +/-, and Balance Left/Right -- and, for each of these pairs, a reset button to return that parameter to its default setting. Press the RCA button to select that input, or Bluetooth to access Discover and Paired; there’s also a Bluetooth Reset button. Another unusual and welcome feature of the YU is that you can switch between its RCA and Bluetooth inputs without having to re-Pair. 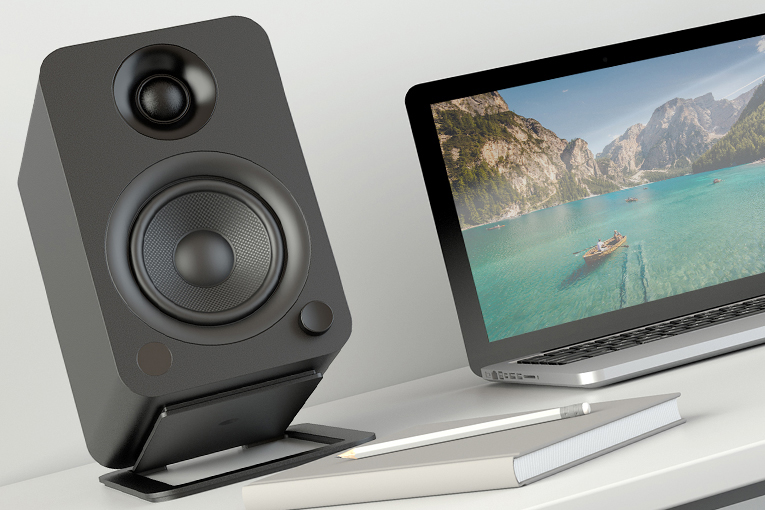 Kanto specifies the YU’s frequency range as 60Hz-20kHz, its nominal impedance as 4 ohms, and its class-D amplifier as producing 70W peak per speaker. The YU is compatible with Bluetooth 4.2 with Qualcomm aptX.

It was a simple joy to set up the Kanto YUs. Plug the power cord into the left speaker, run the wire from it to the right speaker using the red (+) and black (-) binding posts, and flip the left speaker’s master Power rocker to On. The YUs will emit some pleasant, quasi-musical tones. When they’re done, you’re in business.

Bluetooth pairing was fast and easy. Using the remote, put the speakers in Pairing mode, discover the YUs on your Bluetooth device and select them. Even my Benji Rocker music player, which can be cranky about such things, paired instantly. 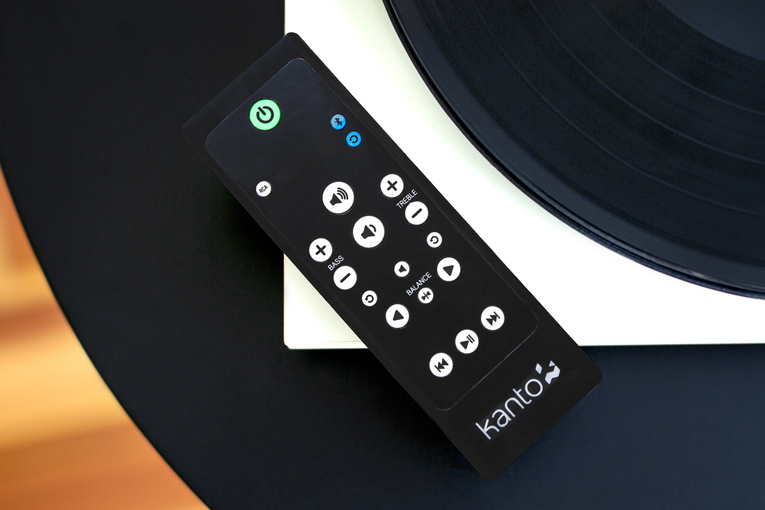 All controls worked as they’re supposed to, as did the RCA inputs and the subwoofer output (the latter is full-range; adjust your sub’s crossover and level controls to match the YUs). From my listening seat I could adjust the volume, bass, and treble, and switch inputs -- no need to use the multifunction button on the front of the left speaker. I did, however, have to aim the remote at the speaker’s IR sensor to ensure smooth operation.

The LEDs are very small -- easy to see when you look for them, no distraction when you don’t. Thanks, Kanto.

I used the Bluetooth and wired outputs of my devices, and found Bluetooth 4.2 aptX pretty much indistinguishable from the wired connection. The RCA jacks would be perfect for a CD player, but for vinyl you’ll need a phono preamp -- unlike the YU4, the YU has none.

Like the TUKs, the YUs sounded very natural. The highs shimmered without harshness, and the midrange had very good presence. The bass -- really, no more than the mid- and upper bass -- was sufficient and focused, if a bit reticent. That was easily corrected by hooking up my Polk Audio DSW Pro 550 subwoofer. Kanto offers their own powered subwoofers, the Sub6 (6” cone, $249.99) and Sub8 (8” cone, $289.99), but any good sub should do the job. 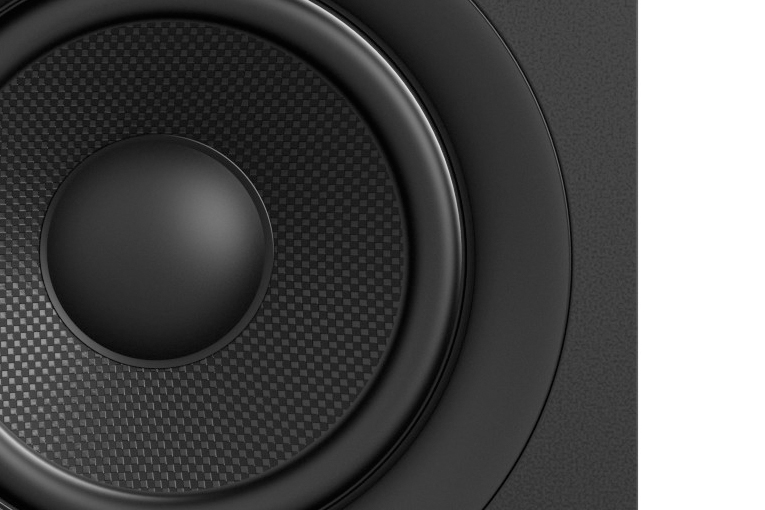 The YUs’ imaging was interesting. Few aural images appeared beyond the speakers’ outer side panels -- nor, thankfully, did sounds seem to come directly from the speaker positions. Each sound was effectively anchored where it should be on the soundstage, depending on the recording, and most of the images “appeared” between the speakers. You might want to place the YUs a little farther apart than you might other speakers to increase the soundstage width.

Beethoven’s Symphony No.6, Pastoral, was one of the first pieces of classical music I got to know, back in high school. I’ve heard well over 50 recordings of it, but keep returning to the autumnal-sounding one recorded by Pierre Monteux with the Vienna Philharmonic Orchestra (16-bit/44.1kHz ALAC, Decca). The sound is close-up and very lush. Through the YUs, the upper strings were surrounded by a beautiful sense of space, and the woodwinds imaged dead center and well behind them. Even without my subwoofer turned on, the YUs made this old favorite sound new again.

One of my favorite references for reviewing speakers is a 1958 recording of the suite from John Antill’s ballet Corroboree, with Sir Eugene Goossens conducting the London Symphony Orchestra (24/96 ALAC, Everest). The work is scored for some very colorful percussion effects, and the engineering by producer Bert Whyte can’t be bettered. This time I turned to the second movement, Dance to the Evening Star. With its high string harmonics, softly struck cymbals, tinkling celesta, and timpani glissandos, the mood it creates is simultaneously eerie and appealing. All of these subtleties came across precisely through the YUs, the highs detailed yet delicate. There was no harshness, but the YUs’ little 4” midrange-woofers created actual midbass impact. 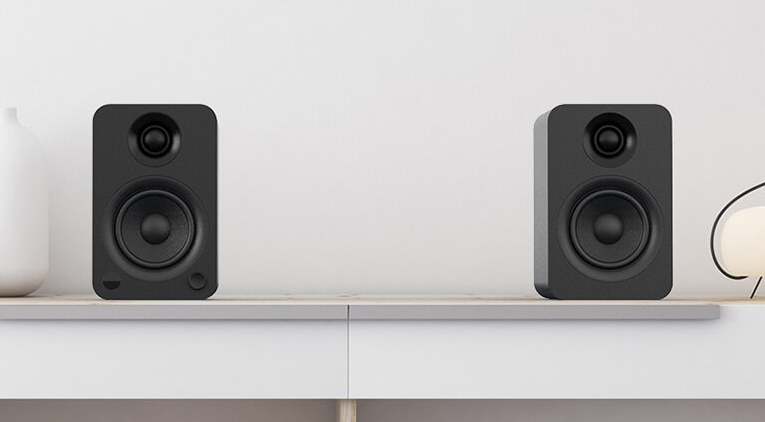 From 1964 to 1993, Bill Mayhugh (1927-2018) hosted an overnight jazz show on Washington, DC’s WMAL-FM. Impressionable youth that I was, I fell in love with the show, jazz in general, and, thanks to Mayhugh, June Christy in particular. Christy’s Ballads for Night People (16/44.1 ALAC, Capitol), a 1959 release, does full justice to Capitol’s then-slogan of “Full Dimensional Stereo.” At the beginning of “Night People,” over the YUs I could hear a way-down-there contrabass-clarinet buzz from Chuck Gentry on the right side of the soundstage, and on the left, a crisper-than-usual harp played by veteran session musician Kathyrine Julye. Christy’s voice was at dead center. The YU produced all of the detail, and this time did image past the speakers’ outer side panels, throwing a superwide soundstage.

Kanto’s YU powered Bluetooth speaker seems a perfect choice for folks on a budget who don’t want to settle for anything less than excellent stereo sound. It’s user-friendly, easy to set up, and, with the addition of a subwoofer, can stand up to any sort of music. The YUs could easily serve in a modest system whose only sources are Bluetooth and a CD player.

If you want more options and are willing to spend a bit more, the YU4 ($329.99/pair) kicks in two TosLink digital inputs, a built-in phono preamp, a USB port for charging portable devices, a ground post for a turntable, and a choice of eight colors. With either model, I hope you’ll find your Kanto experience as joyful as I have mine.