Depending on their size and shape, most waterproof speakers can be taken into the shower, where they can be safely splashed. Looking for one specifically designed for use in the shower, I found the Jensen SMPS-626. This mighty mite has many appealing features, and, at only $34.99 USD, could represent true value for the dollar. 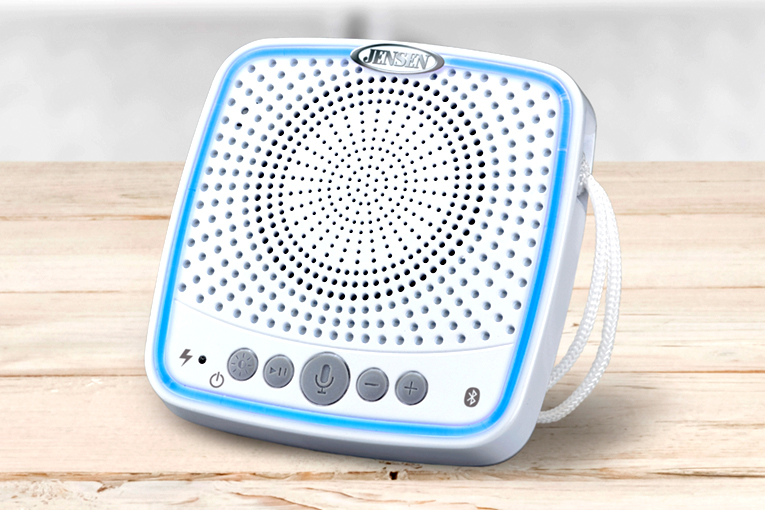 The Jensen SMPS-626 comes packaged in a clamshell of clear plastic surrounded by a cardboard outer box, on the back of which are printed its specifications and features. Inside are a USB-to-Micro-USB charging cord, a 3.5mm audio cable, and a detailed instruction sheet in English and Spanish. The SMPS-626 itself, available only in white, weighs 6.4 ounces and is 3.25” square by 1.5”D, with beveled sides and rounded corners. It’s made of hard plastic that feels very solid, though I wouldn’t want to drop or throw it.

At the top of the front surface is the Jensen logo, but most of the SMPS-626’s face is perforated by little holes that radiate out from a central point about an inch below the logo. Only some of these holes go all the way through the front panel and thus constitute a grille for the speaker driver itself, which seems to be about 2” in diameter. Around the edge of the case runs a color light ring that can glow blue, green, red, yellow, purple, or cyan, or in patterns of the three warm colors, the three cool colors, or all six, the colors chasing each other around the ring. The light show can also be turned off entirely.

At the bottom, below the grille, are six control buttons, from left to right: Power, also used to choose the light ring’s color(s) and pattern; the four-way Play/Pause/Receive Call/Pair Bluetooth button; a large button, for Talk or to activate the True Wireless Stereo (TWS) system, which pairs two SMPS-626 speakers for stereo sound; and two buttons for Volume Up/Down (short presses) or Previous/Next Track (long presses). 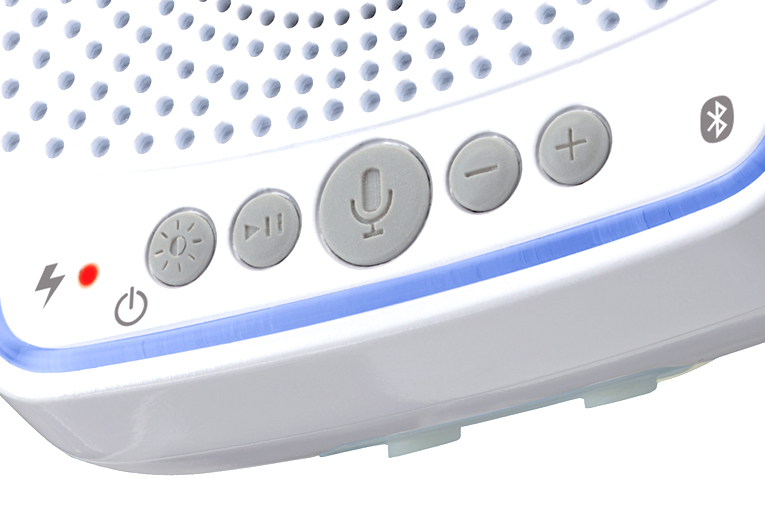 Using the Talk and Receive Call buttons, you can use the SMPS-626 as a speaker phone -- conceivably, you can take a call while showering. And once the speaker is paired with your smartphone, you can use it to ask questions of or give orders to Apple’s Siri or Google’s Assistant.

To the left of the buttons is a small LED that glows red when the SMPS-626 is charging, and goes dark when charging is completed. Behind a little rubber hatch on the speaker’s bottom rear are a Micro-USB connector and 3.5mm audio jack. This tightly fitting hatch must be sealed in place to ensure the speaker’s waterproof operation.

The left, top, and bottom front edges are smooth and empty; emerging from near the top of the right edge is a nylon lanyard that appears to be very strong. On the speaker’s back, a large plastic ring with two detented positions can be pulled out to serve as a stand to set the speaker on a solid surface. The ring encircles a horseshoe-shaped socket that accepts the provided suction cup, for fastening the speaker to the wall of a shower stall.

Jensen’s specifications tell us that the SMPS-626’s power output is 3W RMS, it has a lithium rechargeable battery, its waterproof rating is IP67, and it supports A2DP, AVRCP, and HFP Bluetooth. It took about three hours to charge the Jensen SMPS-626’s battery via USB.

Bluetooth pairing was easy. When the speaker is first turned on, it enters pairing mode and the light ring flashes blue. Discover the speaker on your device, select it, and pairing takes place immediately. There are voice announcements of “Power on,” “Power off,” and “Bluetooth connected”; a bell tone lets you know that the SMPS-626 has successfully paired with your device. The range of Bluetooth operation was about 25’ in my house.

The buttons all did what they were supposed to do but had to be pushed very firmly -- no doubt required by the waterproof design. The Power button was particularly hard to engage -- I had to hold the speaker in one hand while pressing down with one finger of the other.

One of the biggest delights of using the SMPS-626 was that it can be mounted in three different ways: using its stand, its strap, or its suction cup. I used the cup in my shower, whose walls are of smooth fiberglass, but still with some trepidation -- in the past, I’ve had mixed results with suction cups. But after I’d waited a bit, the cup held firm. I placed the speaker at ear level, where I could easily hear it over the noise of my Oxygenics showerhead, which mixes air into the water to produce a powerful stream from low-pressure plumbing. I used the SMPS-626 in the shower seven days in a row, including removing it from and replacing it on the cup two or three times -- the cup remained stuck fast to the wall. 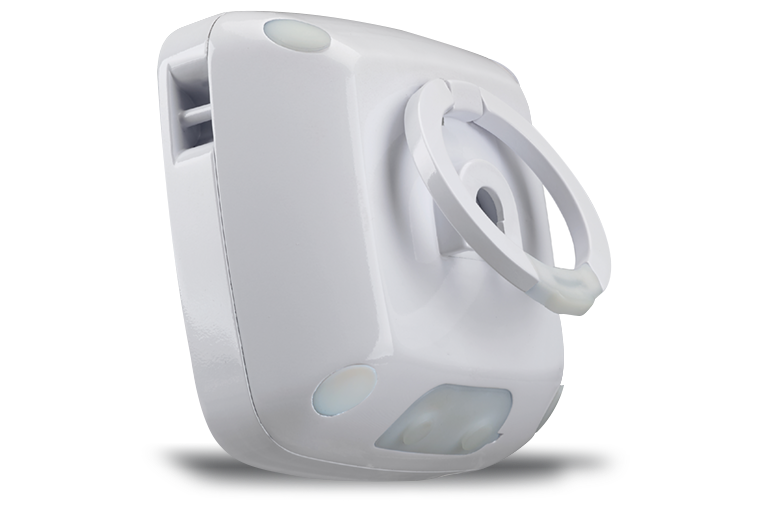 The color light ring was fun. I could match the colors and patterns to my mood, or the mood of the music playing. I finally settled on the rainbow sequence of all colors. I ran the speaker at high volume for eight hours without running out of power.

I appreciated the detailed instruction booklet -- a rare inclusion for this sort of device. It addressed all of the problems that might come up, and the diagrams are clear and helpful. The warranty is far too short at 90 days, but for this low price, I figured I could just buy another SMPS-626 should this one break down after three months.

The Jensen SMPS-626 wasn’t designed to produce booming bass -- it sounded like the very small speaker it is. But it played loudly enough, and though it reproduced only the midrange, with a touch of treble, what sounds it did reproduce were relatively clear and free of distortion. Designed for background listening, it served that purpose.

I listened to the first movement of J.S. Bach’s Harpsichord Concerto No.5 in F Minor, BWV 1056, with the late Raymond Leppard (1927-2019) as soloist and conductor of the English Chamber Orchestra (16-bit/44.1kHz ALAC, Philips). The tinkling harpsichord came through handsomely, as did some pizzicato upper strings. Considering the SMPS-626’s limitations, I’d have to judge this a complete success.

The Fantasticks still holds the record for the longest continuous run (1960-2002) of any Broadway musical, though it’s since gone far past that milestone with a Broadway revival and hundreds of other productions worldwide. One reason it’s been produced so often is that the pit “orchestra” required is so small: piano, harp, and drums. The original-cast recording (16/44.1 ALAC, Verve) sounded very good through this little shower speaker. The sparse score was never muffled, and the Jensen’s reasonably accurate reproduction of the midrange made the voices of Jerry Orbach and Rita Gardner immediately recognizable. Another win for the SMPS-626.

The best album by 10cc is, in my opinion, The Original Soundtrack, from 1975 (16/44.1 ALAC, Mercury/Mobile Fidelity Sound Lab). The latter parts of this recording overtaxed the SMPS-626 -- the highs sounded unfocused, and borderline ugly -- but voices came through clearly, and quieter sections scored well.

The Jensen SMPS-626 scores points as a shower speaker, and the various ways of mounting it let the user put it almost anywhere. Its Receive Call and speaker-phone abilities are great conveniences for those with smartphones, and the show put on by its color light ring is cool. But even for $34.99, it doesn’t rank with other tabletop Bluetooth speakers in its price range. It is what it is: a shower speaker. As such, it works just fine.