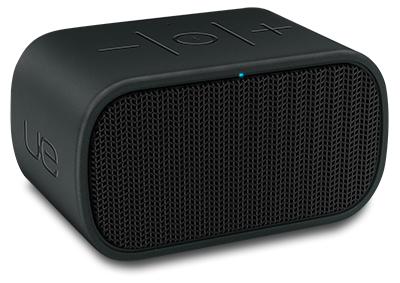 There seems to be no end to the craze for Bluetooth mini speakers -- new ones pop up every day. But while many have appealing features and good sound, most still sound like . . . well, like mini speakers. Not so Logitech’s mighty UE Mini Boom, which, with your eyes closed, could fool you into thinking you’re hearing something much bigger.

Probably because it’s so small, the UE Mini Boom ($99.99 USD) doesn’t come in Logitech’s usual packaging, but in a clear plastic box on a black plastic base. Depress a pair of locking tabs to remove the box, and more tabs to separate the base into two parts. The lower part houses a Micro-USB charging cable and two very small publications, one a startup guide (no text, just pictures), the other the usual warning and warranty information.

The UE Mini Boom measures 4.4”W x 2.4”H x 2.6”D and weighs precisely two-thirds of a pound. It has two 1.5” drivers and one 3” x 1.5” passive bass radiator. Its metal body is wrapped in a rubbery material, with metal grilles front and rear. To keep the UE’s appearance sleek its controls and labels are incised on its surfaces. On the top panel are three large controls: Volume Up, Volume Down, and Bluetooth pairing. The UE logo appears on both side panels. On the rear, in a small recessed strip, are the sliding On/Off switch, a 3.5mm input jack, a USB jack, and a slit that serves as a bass port.

The UE Mini Boom is available in five color combinations. Three match a black body with a grille of black, yellow, or red; another has an orange body and a gray grille; and the fifth has a purple body and yellow grille. The build quality is excellent -- the UE Mini Boom feels absolutely solid in the hand. I’m confident that it would survive being dropped, though I didn’t test that.

Logitech claims for the UE Mini Boom a maximum sound-pressure level of 86dB and a frequency response of 130Hz-20kHz. They claim that the rechargeable lithium-ion battery can play for ten hours, and that the range of Bluetooth operation is 50’. The Mini Boom can take turns playing from two different paired devices, and can connect with NFC-supported devices.

Charging the UE Mini Boom was easy. Plug the charging cable into the speaker and the other end into a USB port on your computer -- or your AC adapter (Logitech doesn’t provide one). A small green LED to the right of the On/Off switch will slowly blink to indicate that the UE is charging. When it’s fully charged, the indicator glows steadily.

Pairing, too, was a snap. Push the pairing button, which starts a blue LED behind the grille blinking. Select the UE Mini Boom on your device -- that LED will glow a steady blue, to indicate that the UE has successfully paired with your device.

An app for the UE Mini Boom allows one to name it and to pair two for stereo sound, and grants access to three different EQ settings. But you can pair two Mini Booms for stereo without the app by pushing the Volume Up and Bluetooth pairing buttons on one speaker, then tapping the Bluetooth button on the other speaker twice.

Though the UE Mini Boom provided excellent connectivity through almost my entire house, I couldn’t get more than 34’ away from it without dropouts.

Though tiny, the UE Mini Boom put out enough sound to fill a small room. When I asked visitors to close their eyes, then played the UE, they usually identified it as a medium-size bookshelf speaker.

The sound wasn’t just big -- it was very good. The midrange was rock-solid, and the highs were there when called for, never prominent when not needed, and weren’t shrill. The midbass, too, was impressive. The lowest bass went missing, of course, but the mid- and upper bass provided impressive beats, given the right recordings. Moreover, I could push the UE to its output-level limits without hearing any distortion.

I listened to John Barbirolli and the Hallé Orchestra’s earlier recording of Elgar’s Enigma Variations (16-bit/44.1kHz ALAC, EMI). The last movement is fairly thickly orchestrated in the middle, but softly and not-so-softly struck cymbals make shimmering impressions. The UE Mini Boom handled these perfectly. And near the end, when the pipe organ joins the full orchestra, the result was not disappointing -- the UE kept these sounds distinct and clear. 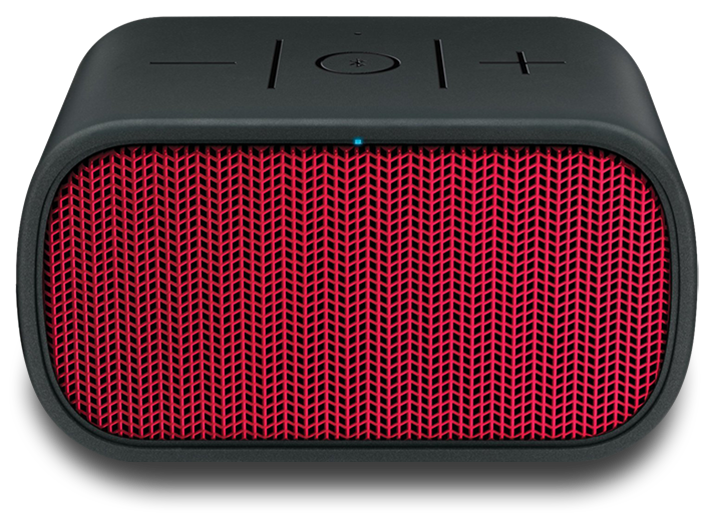 In “Till the Walls Come Tumblin’ Down,” from Love Stinks (16/44.1 ALAC, EMI), the J. Geils Band delivers one of my favorite rock lines: “You gotta brush your teeth with rock’n’roll.” That and the rest of this song’s lyrics came clearly through the UE Mini Boom. The walking bass line, too, was as clean as a whistle, setting up vibrations that resonated through the entire glass-topped table I’d set the UE on. Thanks to its rubbery case, the Mini Boom stood firm.

Frank Sinatra’s Only the Lonely (16/44.1 ALAC, Capitol) contains “Blues in the Night,” the ultimate anthem for the lonely and the dumped. Sinatra’s distinctive mid-career voice sounded as good through the Mini Boom as I’ve ever heard it from a portable speaker, as did the light percussion and muted trumpet in the background.

In fact, any genre of music sounded good through the UE Mini Boom; its versatility amazed me.

The UE Mini Boom is the Little Bluetooth Speaker that Could. It wirelessly produced room-filling sound that was well balanced and free of distortion. It’s totally portable, and will partner with a laptop well. It has a generous warranty of two years, and it’s affordable -- Amazon.com sells it for $79.95. If you’re buying two for stereo, however, it might be better to buy a larger one-box speaker, such as Boston Acoustics’ MC100 -- though because that fine speaker is larger, weighs 4.5 pounds, and must be plugged into the wall, it can’t really be called “portable.” But if you want a small Bluetooth speaker that’s easily moved around, you can’t go wrong with Logitech’s UE Mini Boom.