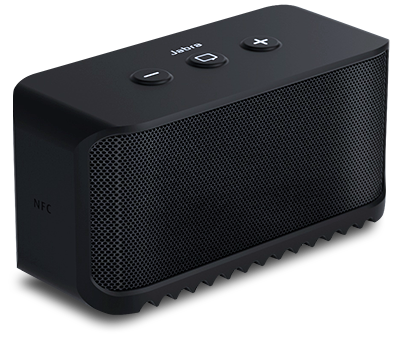 From Day One, the Jabra Solemate Mini and the Logitech Mini Boom portable Bluetooth speakers seemed to be in direct competition with each other: FedEx delivered them the same day.

The Jabra Solemate Mini ($99.99 USD) comes nestled in a small, sturdy box. Lift out the speaker and on an insert you’ll see the very simple, illustrated directions: “1) Turn On. 2) Bluetooth Connect. 3) Play.” Lift out that insert and you’ll find a USB-to-Micro-USB charging cord, a quick-start pamphlet in many languages, warranty information, and a reminder to register your unit.

The Solemate Mini is small: 4.9”W x 2.3”H x 2.1”D. The bottom, top, and sides are rubberized material over metal, and the front and back are covered with a fine-mesh metal grille. It comes in black, blue, yellow, or red. One of the Solemate’s most distinctive features is on the bottom panel, which is ridged like the sole of a running shoe. This keeps the speaker from jumping around when you push it to high volume levels. Put it on a flat surface and try to push it from side to side -- it won’t budge without a lot of force. Also on the bottom is an ingenious hollow for the provided 3.5mm cable, to be used with non-Bluetooth devices.

Nothing mars the smooth look of the front and rear grilles. On the top are three slightly protruding buttons, “+” and “–,” for volume up and down, between them a button for answering phone calls (the Solemate can be used as a speaker for your smartphone) and for checking the status of the battery’s charge. By holding down “+” (or not) as you power on, you can hear (or not hear) vocal prompts and confirmations, such as “Solemate is connected.”

On the right end are the other controls. The tiny, sliding on/off switch is recessed so that the overall surface remains flat. I found this tiny button difficult to operate, even with good fingernail action. Below it is a 3.5mm input jack for signals from non-Bluetooth devices, and below that a Micro-USB port for the charging cord. 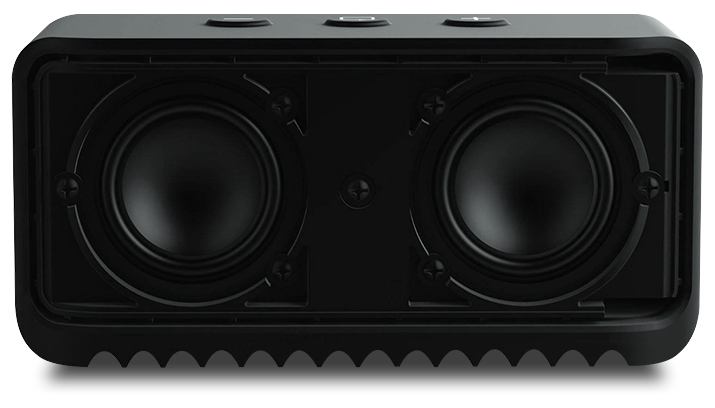 The Solemate Mini fits comfortably in one hand and feels solid as a brick, though it weighs only 10.4 ounces. It’s both a Bluetooth and a truly wireless speaker, in that it can connect to an audio signal using Bluetooth technology and has a rechargeable battery. It has two forward-firing 1.4” drivers and, behind the rear grille, a 3.5” x 1.4” bass radiator.

Jabra says that the Solemate Mini’s battery takes about three hours to fully charge and that it will provide about eight hours of playing time, estimates I found to be pretty accurate. To charge the Solemate from your AC, you’ll need an adapter so you can plug the USB cord in. If you’re charging from a computer, that should be no problem.

Pairing with a Bluetooth device is simple, especially if you activate the voice prompts. The first time, you just hold down the top middle button for four seconds; you’ll get a voice prompt, and the blue LED will start to flash. After the first time, I didn’t have to do anything except turn the Solemate on. It automatically paired with my iPod Touch.

I found the range of Bluetooth reception about normal. I could go 25’ from one end of the house to the other, with a few walls in the way, and still get excellent reception; farther than that and dropouts began to occur, and at 30’ there was no signal.

The Jabra Solemate Mini played loudly enough, though it was far from the loudest-playing Bluetooth speaker I’ve heard. Its rubber sole worked just fine in keeping the speaker from bouncing around when I played it loud. It had a very convincing midrange, an adequate and not shrill top end, and a suggestion of bass. Early in my listening, I remembered the app Jabra provides for its headphone models and wondered if it might work with the Solemate. I’d installed it on my iPod Touch, so it was no problem to engage it. I’m no fan of the usual processing circuits, but I have to admit that using the app made the Solemate Mini sound much better -- mostly richer and fuller, less like a small portable speaker and more like a medium-size one. The app has many preset equalization settings, such as Rock, Classical, Jazz, and Custom; I decided on Flat, which apparently still adds some equalization. I did try the Dolby Digital Plus processor, which seemed to make the biggest difference. The free app can be downloaded from Apple’s App Store, and I recommend it; the Solemate sounds too small and bass-light without it.

Some have complained of distortion when pushing the Solemate to its maximum volume level, but I heard none. The Bluetooth volume level is automatically limited: When you hear a bell ding, you can’t push the volume any higher. That limit doesn’t apply if you’re using the 3.5mm input to play music from a non-Bluetooth device.

The Solemate Mini sounded so much better with the Jabra app that I just left it on. “A Boy Like That” and “I Have a Love,” from the original Broadway cast recording of West Side Story (16-bit/44.1kHz ALAC, Columbia), sounded quite nice. The distinctive voices of Chita Rivera and Carol Lawrence were immediately recognizable, bolstering my initial, positive assessment of the Solemate’s midrange. The punchy brass at the beginning of the duet sounded angry and insistent, just as it’s supposed to. 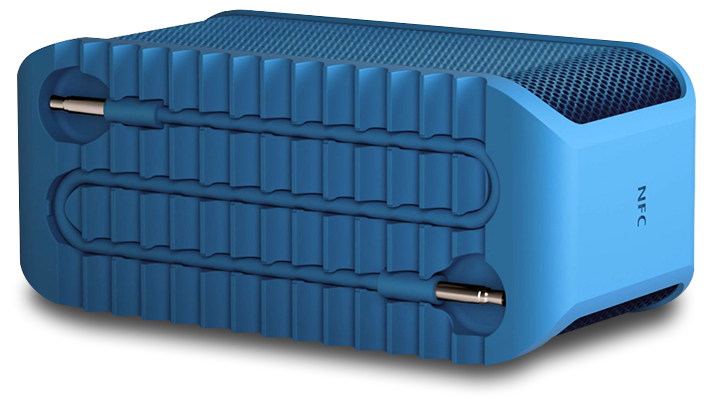 The Beatles’ “A Day in the Life,” remixed for surround sound for Cirque de Soleil’s Love (16/44.1 ALAC, Capitol), had surprising impact. The voices seemed suspended in air, apart from the instruments. The latter sounded well balanced, and there was a good enough suggestion of punchy bass, a mellow midrange guitar and piano, and delicate upper-range percussion. Emanating from such a tiny speaker, it sounded better than it had any right to.

“Angel Eyes,” from Frank Sinatra’s Only the Lonely (16/44.1 ALAC, Capitol/Mobile Fidelity Sound Lab), provided evidence of the Jabra’s quality of midrange sound -- Sinatra’s voice sounded very much as it does through my expensive MartinLogan speakers. The lush sound of Nelson Riddle’s orchestral arrangements was appealing and well balanced. The only thing I really missed was a bit of heft to the plucked double bass.

The finale of Bernard Herrmann’s suite from his music for Citizen Kane, with the composer conducting the London Philharmonic (16/44.1 ALAC, London Phase 4), features swirling figures from the woodwinds augmented by glockenspiel and xylophone, the brass and strings adding more sound as the movement progresses. I was impressed with the clear, transparent sounds the Solemate Mini reproduced, but the ending didn’t have quite enough oomph.

If I hadn’t already heard the Logitech Mini Boom, I’d be inclined to give the Jabra Solemate Mini better marks. But I have, and the Logitech plays much louder than the Jabra, with the same excellent midrange clarity, and more bass. Moreover, the Mini Boom doesn’t really sound like a small speaker, whereas the Jabra Solemate Mini does -- albeit a very good small speaker. They cost precisely the same, and you can get about the same discount at Amazon. I saw a few Jabras that were less expensive than the Logitechs, but the difference was negligible.

I do like the Solemate’s sole -- it’s a clever way to keep the speaker from jumping around. I also like having the mini-plug cord stowed aboard at all times. And I like being able to check the battery level. But for me, until something else comes along, the Logitech Mini Boom wins the Battle of the Bluetooth Mini Speakers hands down.