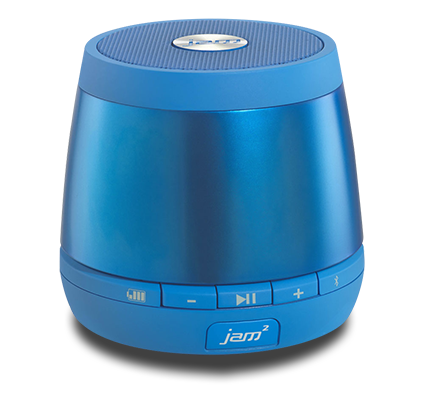 I’m enough of a dinosaur to have witnessed the birth of stereo sound as a popular consumer medium. It was one of the biggest landmarks in the history of home audio, one that I felt would be permanent. Everything should be in stereo, right? Well, yes -- until Bluetooth speakers and miniaturization came along. Then we began to be presented with very small speakers that produced sound bigger than we ever expected -- monaural sound. This seemed to me a step backward -- though not nearly as bad, or as retrograde, as the virtual abandonment of surround sound.

Now, in an effort to make things right, HMDX has come up with the little Jam Plus wireless Bluetooth speaker ($59.99 USD), two of which can be paired to deliver . . . stereo.

In the jam jar

The Jam Plus is packaged in a plastic container with a screw-off top that looks for all the world like a jar of preserves. Inside are the speaker itself, a 10” USB charging cable, a postage-stamp-sized instruction booklet, and a round, 3.25”-diameter, quick-startup guide.

The Jam Plus weighs just 9.2 ounces, and is 3” high and 3” in diameter at the base, sloping up to 2.6” at the top. It comes in Blackberry (gray), Blueberry (blue), Pineapple (yellow), Plum (purple), or Watermelon (pink), and looks a lot cheaper than it feels. Made mostly of plastic, metal, and some sort of rubberized material, the speaker feels solid in the hand. I didn’t try a drop test, but I have the feeling that if the Jam Plus landed on its rubberized material, the speaker would survive falling a modest distance. A metal disc at the center of the grille on the speaker’s top bears the Jam logo, which only cheapens the look. Under this is the single top-firing drive-unit -- size not specified, but obviously less than 2.6”.

Along the circumference of the base are controls for Volume Up/Down and Play/Pause, as well as lights to indicate the statuses of Bluetooth connectivity and the charge of its rechargeable lithium-ion battery. On the opposite side of the base are a line input and a mini-USB charging port. On the speaker’s underside are the power button and the all-important slider switch that assigns that speaker’s task: left channel, right channel, or mono.

The charging cord, provided in the same color as the speaker color, is USB only. If you want to charge from AC, you’ll have to provide an adapter. Amazon.com has a special price of $99.95 for two Jam Pluses.

The Jam Plus takes about three hours to fully charge. That’s not bad; the downside is that each charge provides only about four hours’ listening.

When you use a device (such as a CD player) plugged into the line input, you won’t automatically get stereo sound from a pair of Jam Pluses -- the speaker is configured by setting the switch on its bottom. Because I was using two Jam Pluses, I designated one as Left and one as Right. If you’re using only one, set the switch to the middle, Mono position. 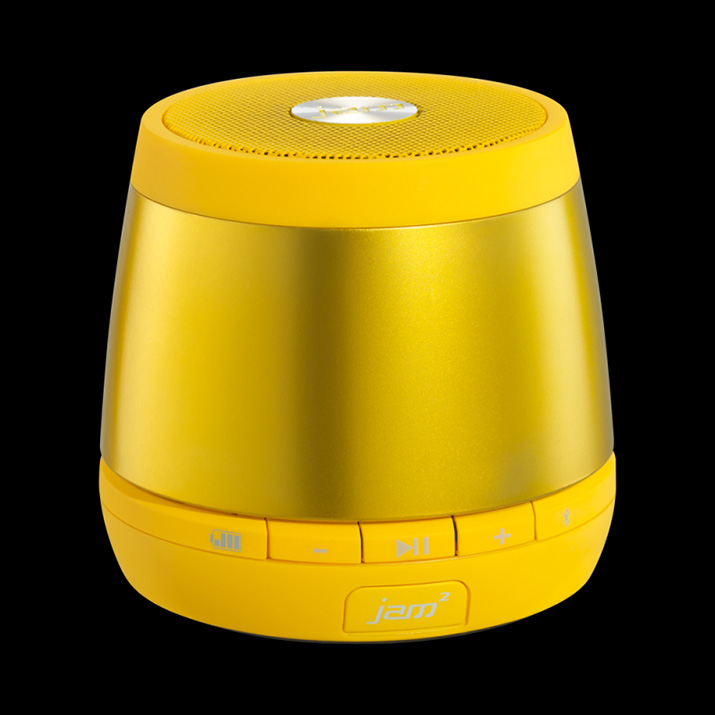 Pairing for stereo play is simple. Hold down the Power button on one Jam Plus until it’s turned on, then do the same for the other speaker. They will then start talking to each other; when pairing is complete, you’ll hear a steel-drum flourish. Pair both speakers to your Bluetooth device and you’re ready to go. The Jam Plus is wireless -- you can place them anywhere you like, for best stereo separation and sound. The speaker’s Bluetooth range is specified as 30’. I found that I could use them anywhere in my house without losing connection.

However: Once you’ve paired the speakers, the blue Bluetooth light on the base will stay on, and a blue Jam2 logo, also on the base, will slowly flash. This drove me to distraction. To hide these lights, I turned the speakers away by 180 degrees. This didn’t affect the sound.

You wouldn’t expect a speaker of this size to have much bass, and the Jam Pluses didn’t. In fact, they had almost no bass. I could feel the vibration of any surface on which they were placed, but I couldn’t actually hear much of anything to go with those vibrations. I tried different locations, but nothing seemed to work. The HDMXes had a decent, somewhat warm midrange, rolled-off highs, and just the merest suggestion of bass. I tried every kind of music, but only solo guitar or flute, with or without vocals, and spoken word sounded worthwhile. Instead of buying two of these speakers for $100, you could buy Boston Acoustics’ one-piece MC100 Blue for just $50 more. The MC100, too, puts out true stereo, and in much better sound.

HMDX had the right idea in making the Jam Plus pairable for stereo sound, but they need to build a better speaker to benefit from this technology. As it is, the Jam Plus will appeal to only the most casual listener -- the sort who thinks that MP3s sound just great. The serious audiophile is urged to seek out another brand. The Jam Plus is little more than a toy -- cool in some respects, but incapable of playing music in a way that I would enjoy hearing.