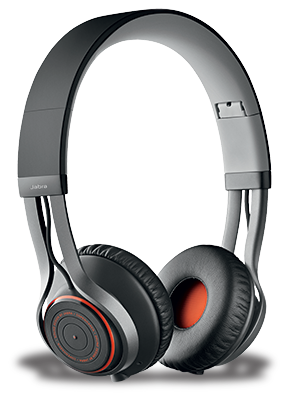 The market for commuter headphones -- less than full size, but more substantial than earbuds -- continues to grow. Recently, Jabra has added two headphone models that can keep up with other leading brands due to innovative design and good craftsmanship. The Revo comes in wireless ($249.99 USD) and wired ($199.99) models. Here I review the wireless model.

The Revos’ plastic box promises “massive wireless sound” and ensures the buyer that the headphones within are “engineered with solid materials.” The box also contains a USB cable, a 1.2m audio cable with a 3.5mm plug, a quick-start guide, and a code for activating the Jabra app. There’s also a soft, flimsy case; headphones of this quality deserve better.

The Revos’ design is simple yet striking: black and gray with orange highlighting. The headband is of shatterproof plastic with steel hinges, and adjustable aluminum calipers that hold the solid plastic-and-foam earcups. The headband is comfortably lined, and the earcups are cushioned with memory foam. The finely braided cables have solid connectors at either end, and are orange to match the accents on the earcups.

Everything about the Revos feels solid, from the ’phones themselves to the cables. Jabra claims to have dropped the headphones from a height of 6’ 6”, fold-tested the hinges 3500 times, and bend-tested the headband 10,000 times. They also tested the cables to withstand a pull force of 33 pounds, and tested everything for resistance to dirt, temperature, and humidity. Built to last, the Revos felt as if they’d do just that. Jabra says they were “designed to be used and abused.” I’ll take their word for it.

The controls are mostly recessed and unobtrusive. The audio cable plugs into the bottom of the left earcup, the charging/USB cable into the bottom of the right earcup. On the left earcup is an On/Off slider switch that you can also use to start the Bluetooth pairing operation. Three LEDs to the right of the connector blink in various colors to report various statuses: green for on, red for off, blue for pairing.

The signal cord has an inline switch you can use to control functions when the Revos are plugged into an iDevice. When you’re using Bluetooth wireless, the controls available are really cool. Swiping your finger in a circle around the right earcup raises or lowers the volume almost like magic. Tap twice front and you skip to the next track, tap twice back to skip back. These were really enjoyable to use; and it was such a relief to be free of pushbuttons that, after using the Revos a while, I found myself wishing everything worked that way -- especially headphones. The only pushbutton on the right earcup is at the very center, to pause or resume play.

Dead center on the left earcup is another button; if you’ve installed Jabra’s app, pressing this takes you to the Jabra’s menu and playlist.

The drivers are 49mm in diameter. The Revos’ impedance is 32 ohms, the sensitivity 119dB at 1kHz, and the power handling is a maximum of 30mW with music, or 20mW long term.

Before you can use the Jabra Revos wirelessly, you must plug in the USB cord and charge the battery. For $249.99, you’d think that Jabra could have included a USB-to-AC converter plug, as many other manufacturers do, but they don’t; you’ll either have to plug the cord into your computer or buy an adapter. Jabra says that charging takes about two hours from a dedicated source, which is about how long it took mine to charge.

You’ll need to adjust the ’phones for your head. I found that the Revos didn’t work for sports or heavy activity: Three abdominal crunches and they’d fallen off. No foul -- Jabra doesn’t advertise them as sport phones -- but after I’d heard how good they sounded, I just hoped they’d work. They should be fine for normal commuting, walking, working at the computer (you can use that USB cord to listen from your computer, in addition to charging), or other normal pursuits. In fact, they’re about the most comfortable on-ear headphones I’ve worn. They didn’t get hot, and after a while I easily forgot I was wearing them. In addition to providing comfort, the memory foam helps tighten the seal to damp outside sounds.

Bluetooth pairing was simple. Just slide the headphone switch until the blue LED goes on, select the Jabras from your device menu, and you’ll be up and running in seconds. Jabra claims an operating range of up to 33’, the distance claimed by most manufacturers of Bluetooth devices. I could get that only when outside, with no obstructions. In the house I could get about 20’; when I first tried them as gym headphones, my iPod Touch was in my gym shorts pocket, and unless I used the left pocket, I got occasional dropouts. This won’t bother most people, who will probably have a Bluetooth-enabled device -- but if you want to park it in a central place and then roam around anywhere with your phones, you might not be able to with the Revos.

Sound and the Jabra app

The Jabra Revos produced probably the best Bluetooth sound I’ve heard, though it still wasn’t perfect. Since you can use the Revos as wired 'phones as well, it’s not too hard to make an A/B comparison to prove they sounded a little bit better when plugged in -- but just a little bit.

The Revos are the first Bluetooth ’phones I’ve heard that aren’t severely limited in volume, and thus are also the first such ’phones I’ve heard that let me reach a sound level at the threshold of pain. Don’t do that -- save your ears -- but it’s possible, and there’s something to be said for having that power in reserve. I’ve had to run all other Bluetooth headphones to their upper limit to get acceptable volume; I ran the Revos at 70-75%.

Without the app, the Revos sounded solid, leaning to the bass end a bit; the mids and highs were fairly neutral. With the app, your possibilities expand almost infinitely. The app sets up its own music browser -- it’s similar to iTunes -- using the titles already on your smartphone, pad, or player. It also pairs up with Dolby Digital Plus to give you a six-band equalizer with built-in presets of the usual sorts (Classical, Jazz, Rock, etc.); you can also choose your own settings. I set mine with 50 and 100Hz flat, 300 and 700Hz up a little, 1.8kHz flat, and 3.5kHz up a tad. This gave me an EQ setting I could enjoy with most music; I used some of the presets for particular genres. Nor are the presets blind -- you’re shown which frequencies are bumped up or backed off, and you can take that as a starting point for making your own settings. Like the Rock setting but find there’s too much/little bass? Select it, then play around with those 50 and 100Hz sliders to suit the recording or your personal taste. There’s also a Surround setting, which widens and deepens the soundfield. 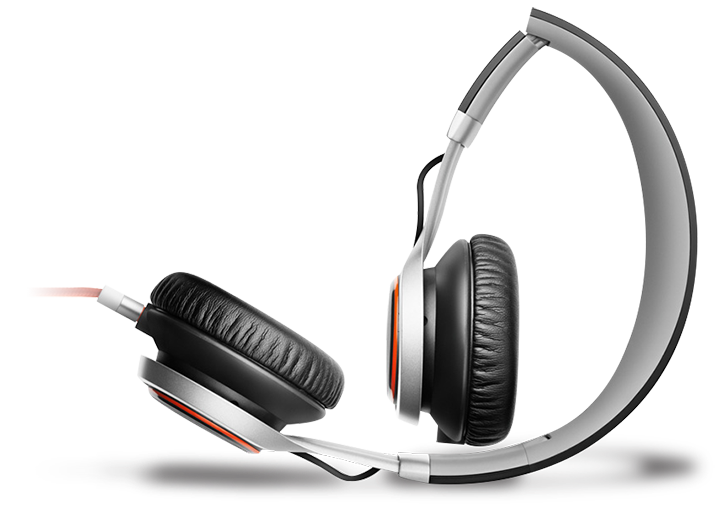 I’ve read that a lot of people don’t like the Jabra app, but I found it liberating and lots of fun to use. The app wouldn’t load about 20 percent of my albums; though the album titles appeared, with cover art, the files themselves didn’t, coming up as null or empty. The app says that full Dolby Digital Plus functionality will soon be delivered via an update; that might correct the problem.

The app also has lots of tie-ins to Facebook and Twitter. You can add favorites or share, but these are things I don’t yet do, and so must take Jabra’s word for it that they -- and the telephone functions -- work. As with almost all Bluetooth headphones, you can receive calls on the ’phones if you’re set up to do so.

Using the app, I had some impressive listening experiences. The opening of the last movement of Rachmaninoff’s second piano concerto (16-bit/44.1kHz AIFF, Chesky/HDtracks) sounded exciting and sleek. Earl Wild’s pianism glistened, and the Royal Philharmonic under Jascha Horenstein provided perfect partnership, with all the balances just right. I used the Classical preset, which backs off the midrange slightly and boosts the bass a tad. It worked for me.

For the title track of Michael Jackson’s Thriller (16/44.1 ALAC, Epic) I used my own custom setting with Surround on. Man, those creaking doors and footsteps had hefty presence. When it entered, the bass was solid and defined. Jackson’s voice was anchored at center, and the wolf howls were all over the place. The sound was good without Surround, more exciting with.

Most people will probably want to go through their device’s menu to activate the Jabra app, but you can also do this with a simple push of the left earcup button. The app can be used for tweaks or as a fun toy. Either way, I think it’s a winner.

Jabra should provide a more solid case and a USB/AC conversion plug, and you might want to check out the Bluetooth connectivity in real-world situations. Otherwise, the Jabra Revos are built like a battleship, are comfortable to wear, have great sound, can be used wireless or wired, and have an imaginative and useful app. At its price, it should fill the bill for many listeners.