Nearly two years ago, I was introduced to Grace Digital when I reviewed the company’s Eco Extreme powered waterproof iPod case and loudspeaker. I was struck by the attention to detail and the Eco Extreme’s user-friendliness. It not only did what it was supposed to, it was fun to use, and at an almost unbelievably low price: $49.99 USD.

Since then, Grace has introduced more items in what it now calls its ECOXGEAR line of products. The latest, the ECOXBT Bluetooth speaker ($129.99), can accompany you literally anywhere. It has a rechargeable lithium-ion battery, and is shock resistant and waterproof. It floats.

The ECOXBT measures 9”W x 4”H x 2.8”D and comes with a USB cord, a USB-to-AC power adapter, a carabiner clip, and a user guide. Like Grace Digital’s other ECOXGEAR models, it’s made of plastic overlaid with hard rubber. Feet are molded into the bottom. On the rear, at one end, under a removable cover, a shallow compartment holds the recharging and auxiliary sockets; at the other end is a place where you can attach the carabiner clip. The controls and LED indicators are all on top, flush with the surface. At one end are a power switch with green LED, a Bluetooth Pair/Connect button with LED (blue, of course), and a battery-charge indicator (this glows red while the battery is being charged, green when charging is complete, and goes dark when the charging cord is detached). At the other end is a rocker volume control, and an Answer Calls button for taking an incoming phone call (assuming your music source is a smart phone).

The wraparound handle and grille are always black; the speaker box can be had in black, red, or orange. The ECOXBT feels solid, like a brick, yet weighs only 1.5 pounds. Behind the grille are two "full range" drivers, for stereo operation. The battery takes about two hours to fully charge; Grace claims a battery life of about ten hours.

The ECOXBT paired up with my iPod Touch more quickly than any other Bluetooth device I’ve tried. I just pushed the Grace’s Pair/Connect button, activated the Touch, and in two or three seconds the ECOXBT’s Bluetooth light was flashing. Five seconds later it was glowing steadily, indicating successful pairing and that it was good to go.

The ECOXBT begs to be carried around. Those curved handles attract hands as honey does bears. I just wanted to pick the thing up and carry it with me. But I didn’t even have to use the handles -- the ECOXBT can be easily picked up by wrapping a hand around it, or with the carabiner clip. Grace Digital has again proven that they have, um, a handle on what works for consumers.

That rubber covering means you can set down the ECOXBT almost anywhere and it will stay put. And it’s waterproof. I took it in the shower with me several times, splashed quite a bit of water on it, and its charging compartment remained absolutely dry. Grace warns that you have to put that cover on exactly right, to make a watertight seal.

The ECOXBT played loudly enough for almost anyone I know. My Oxygenics showerhead mixes air with the water and is thus pretty noisy, but I could still easily hear music from the ECOXBT. I was usually running the ECOXBT at its top volume level (a bell rings when you reach that point). But the sound wasn’t merely loud -- it was good. This is the best and the loudest Bluetooth speaker I’ve heard. 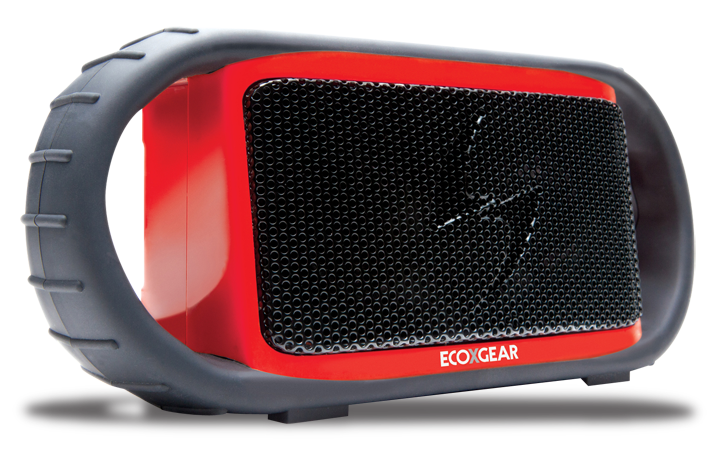 The ECOXBT’s midrange and highs were clear, and it produced more bass than I expected from so small a box, especially a portless one. The opening track on Dave Brubeck’s Time Out, “Blue Rondo à la Turk” (16-bit/44.1kHz ALAC, Columbia), was a wonder. I heard Dave’s piano first, with clear left- and right-hand voicings, then Joe Morello’s tingly percussion and Eugene Wright’s insistent bass, all capped by Paul Desmond’s pungent alto saxophone. It was a good musical experience -- I didn’t feel I was missing much because the ECOXBT was so small.

The last movement of Saint-Saëns’s Symphony 3, in the recording by Paul Paray and the Detroit Symphony, was a surprise (16/44.1 ALAC, Mercury Living Presence). Marcel Dupré’s organ registrations were showy and exciting, the duo piano passages were ethereal, and the cymbal crashes shimmered. This composition is often used to show off $10,000 speaker systems, yet here I was, thoroughly enjoying it through the tiny and amazing ECOXBT.

I’m a fan of Jimmy Webb’s, and his sessions with Richard Harris resulted in a couple of my favorite albums. “Paper Chase,” from Harris’s A Tramp Shining (16/44.1 ALAC, MCA), begins with strings -- lower ones growling, upper ones shining -- followed by a tinkling harpsichord; then Harris sings, and nails the song as no one else ever has. His diction makes each word count, and I could hear every word through the ECOXBT, even though the guitar scoring is fairly loud. (No one has ever accused Jimmy Webb of subtlety in his arrangements.)

I was amazed at the quantity and quality of sound produced by Grace Digital’s little ECOXBT. You can carry it with you as easily as your sunglasses or your favorite T-shirt. It can accompany you to the beach, into the shower or swimming pool, onto a boat, or any other place you wish, and still sound good. What’s not to like? Some will no doubt complain that it has no controls for chapter skip or pause, but you’ll find those on your mobile source device -- and I suspect that including too many controls on the ECOXBT itself would have compromised its waterproofing. For me, it’s perfect for what it is, and an amazing bargain.