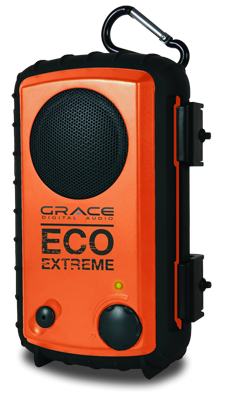 The Eco Extreme comes attractively packed in a box with a transparent plastic window, and a tab for hanging the box on a display rod. Mercifully, the plastic turned out to be a single pane, not the top half of one of those clamshell designs that tear up the hands -- it was easy to get the speaker out. In the box were the Eco Extreme, four replacement dirt filters, and an instruction leaflet. All you need are an iPod or iPhone and three AA batteries.

The Eco Extreme measures 7.5"L x 4.5"W x 2.5"D and weighs 20 ounces without phone or player. It’s a bit bigger than I’d expected, but small enough to be easily portable. Its outer case, of polycarbonate and rubber, can be stood up on platform feet molded into the rubber, or hung on a hook or nail or backpack, etc., with its detachable carabineer. On the front are a 2.25" round speaker grille, a volume control with LED, and a dirt filter. Behind the grille are a 3", fully waterproof drive-unit and amplifier with a claimed output of 3W RMS and a frequency response of 200Hz-10kHz. Inside are a cable with a 1/8" plug for connecting your phone or player, a battery bay, and a stretch mesh compartment. You can use this space however you choose: to store keys, driver’s license and registration cards, spare batteries, etc. 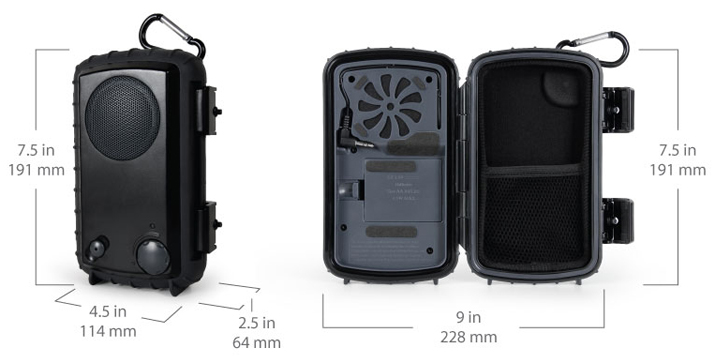 Overall, the case is built like a rock. I marveled at its heft and solidity, and its special solid-lock latches. Those latches have a lot to do with keeping the Eco waterproof. I found them a little tricky to operate at first, but once I’d got used to the push-forward/pull-back move needed to lock and unlock them, it was a cinch. The Eco Extreme has a cool industrial look and comes in one of six colors: Jet Black, Lime Green, Lemon Zest, Orange Peel, Cobalt Blue, or Petal Pink. I opted for Orange Peel -- it’s easy to spot outdoors. 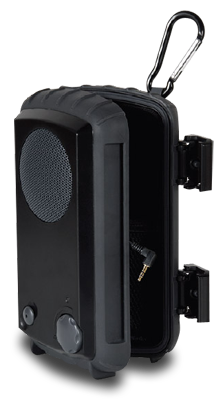 My jaw dropped when I first heard the Eco Extreme: Its sound was not small or tinny. That sound is mono, but its fidelity was excellent, and anything but small. There was more of a sense of bass than I’ve heard from other 3" drivers, and good transparency, too. The more I used the Eco Extreme, the more I learned that it wasn’t a toy but a legitimate audio product. Whether I was playing Apple Lossless files of the J. Geils Band’s Love Stinks, or of Jascha Horenstein conducting the Royal Philharmonic in Dvorák’s Symphony No.9, the results were outstanding.

I mostly tested the Eco Extreme in the shower, where I found it had a big enough sound to be heard over my Oxygenics Vortex shower head, which mixes air with water and can be a bit noisy. At first I was careful to place the Eco where it would get only mildly splashed, but toward the end of the testing I held it directly under the shower stream. Afterward, when I opened the case, the interior was bone dry. When Grace says this unit is waterproof, they’re not kidding.

It also seemed to be shockproof. I dropped it on both wood and carpeted floors, and it showed no sign of damage. I dropped it with my iPod Touch inside, playing an Art Garfunkel song, and it kept playing without interruption. I set it afloat, but here I caution that Grace does not recommend entirely submerging the Eco Extreme, and lists weight limits it must pass to float.

The one drawback to the Eco Extreme is that, other than playback volume, there is no way to control your audio device once it’s been sealed inside. I had to set my iPod Touch for the music I wanted -- I chose one of my playlists -- insert the Eco’s jack, close and lock the case, and set the volume. Then I could take it with me into the bathroom, where I shaved, and then to the shower, where I hung it by its carabineer on a nail I’d driven at a little over ear height. I’m now thinking of assembling a couple of Eco Extreme playlists. Be sure to follow Grace’s advice to set the volume on your unit to about 80%, at which setting the Eco will provide plenty of sound without distortion.

I was constantly amazed at what the little Eco Extreme could do. I like that it runs on batteries. I might easily end up taking it somewhere I couldn’t plug it in to charge it. I could easily pop in three backup batteries, but actually, running out of power seems unlikely -- Grace says that you can expect a battery life of 30 hours of play. I’ve been running my Eco for three weeks now, taking it in the shower every day for about half an hour, and it has yet to run out of juice.

My experience with the Eco Extreme tells me that Grace Digital is a company that pays attention to detail and doesn’t sacrifice sound for gadgetry. I’ll be watching eagerly for their new products later this year.