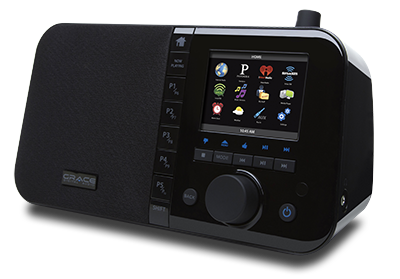 After being generally happy with the Logitech UE Smart Radio as a music player but unhappy with its performance as a clock radio, I thought I’d scope out the direct competition -- Grace Digital’s Mondo Wi-Fi music player and Internet radio. The two models share some common functionality, look very similar, and are priced identically at $179.99 USD, but each has its quirks and idiosyncrasies.

The Mondo comes safely cushioned with Styrofoam spacers inside an attractive box, along with a remote control (batteries included), an AC power adapter, and an RCA-to-mini cable for connection to an iPhone, MP3 player, or CD player.

The Mondo measures 9.75”W x 5.75”H x 3.5”D and weighs six pounds. Like the UE Smart Radio, the Grace is made of glossy black (or white) plastic. The left half of the front panel is a black grille that covers the two drivers and bears Grace Digital’s logo near the bottom. In the upper part of the right half is the 3.5” screen. Below this are buttons for various radio functions, and below them is a large control button, flanked on either side by the Back and Power buttons. Between all this and the grille is a column of buttons; from top to bottom, these are: Home, Now Playing, five Presets, and, at the bottom, a Shift button that gives you five more presets. All of these buttons are flush with the case. In one of the biggest departures from the UE Smart Radio, the volume control protrudes from the Mondo’s top edge. Next to it is a Snooze button. 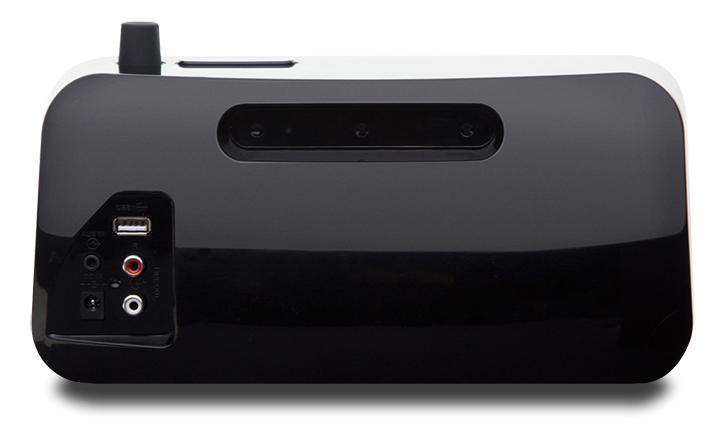 On the rear panel is a recess that serves as a carrying handle, and another that has connections for the power cord, the mini auxiliary input, a USB input, and RCA stereo output jacks. Along the Mondo’s right edge is a 3.5mm headphone jack; the left edge is clean and smooth.

The Mondo can be used with an outboard battery pack, which it will charge while plugged into the wall. This is not included with the Mondo itself, and must be purchased separately for $39.99.

When the Mondo is plugged in, it displays first a blank screen, then a Grace Digital identity screen; then you search for your network. Important: to work at all, the Mondo requires a Wi-Fi network. It found my home network amazingly quickly, and I was up and running. Depending on how your router is set up, you might need to enter your password.

To listen to a radio station, you go to the Mondo’s Home screen, where all of its services are listed in three rows of icons, four in each row. At the top are Internet Radio, Pandora, iHeart Radio, and SiriusXM Radio. Below those are Local, Music Services, My Stuff, and Media Player. Music Services opens listings for DAR.FM, Live 365, MP3 Tunes, NOAA, NPR Radio Service, Pandora (duplicating the Home screen listing), Podcasts, Rhapsody, and SiriusXM (another duplicate). When you select one of these with the big round knob (it looks like a volume control but isn’t), you’ll be guided to select stations, usually by genre. Of course, if it’s a subscription service you’ll need to enter your user name and password. Most of the pay stations offer a month’s free service with the Grace Digital Mondo, so you can take some time to decide whether or not you want to pay. The bottom row of buttons are for Alarm, Weather Bug, Aux In, and Settings.

I have SiriusXM in my car, and so was able to extend that for just a few bucks more a month -- and the Internet Radio icon turned up more stations than I could listen to in a lifetime. In an ad, Grace says there are now over 150,000 Internet stations, and I don’t think they’re exaggerating. There are more genres than I knew existed (World Mediterranean, anyone?), and for each genre, a multitude of stations that can be scanned by name or location. Say you want Classic Rock: 454 stations. Search by location and you’ll discover that they aren’t all in the United States. Want classic rock from Bulgaria or Italy? They’re there.

Two subcategories that might be of interest are Local and College. Local will give you all the local stations that are streaming on the Internet (most of them, I found), and College will do the same for school stations near you. Most of the screens I pulled up listed the quality of the broadcast -- more often than not, a lower MP3 resolution such as 128kbps. It would be helpful if, in an update, Grace could provide a way to search for stations streaming higher-resolution signals. There are some, but you have to hunt for them. But then, I suppose that’s part of the fun of Internet Radio.

I found the Mondo’s radio functions to be easy and fun to use. To program a station as a preset, tune it in, press the Preset button you want to assign to that station, and hold it down till you receive a message that it’s been stored. Done.

The only thing I didn’t like was the often time-consuming buffering. It was always at least two or three seconds, but often as long as five or six. It might be my network, but I don’t think so -- the UE Smart Radio gives me almost instant-on for the same stations.

Trying to get the Mondo to play albums from the music library on my computer was more difficult. It recognized my network and found my music library, but when I picked a file to play, it would often come up empty. I called Grace’s support line and learned that the Mondo loads only 2500 songs and then stops. I got a better shot by loading genres. My Cajun folder, for instance, has only ten or so albums in it -- the entire genre loaded, and I could then select and play any album without mishap. The Mondo can play Apple Lossless files, and FLAC files of resolutions up to 24-bit/96kHz. 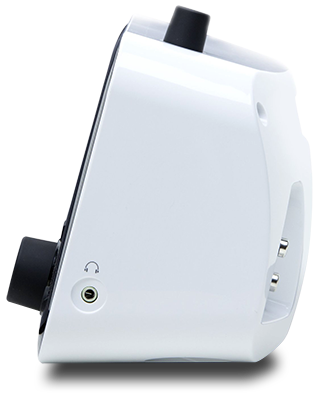 Grace Digital’s support team is entirely in-house: two very nice women out west answer the calls. That’s it -- two. They’re fairly knowledgeable about the basics, though my problem with playing my files was solved as much by me as by them. The support hours are Monday through Thursday, 9 a.m. to 4 p.m. PST; Friday, 9 a.m. to noon; and closed on weekends.

The alarm-clock features were a delight. The Mondo lets you choose what you want to wake up to -- say, your favorite radio station. I have mine set for NPR’s Performance Today, though I do miss the sound effects (babbling brooks and the like) that the UE Smart Radio offers. If the network is compromised as you sleep and isn’t available when you wake, there’s a fallback: a buzzer. The Snooze button is adjustable for up to two hours. For sleeping, you can set the radio’s shutoff time as you choose (mine is set for 25 minutes). I found it easier to set this with the remote.

Otherwise, I found the front-panel buttons more useful than the remote. To set most functions, you have to be able to see the screen, and since it’s small, you have to be within arm’s reach of the Mondo -- at that point, using the remote seems silly. You can also download an app to your smartphone or tablet to use in place of the remote.

The Mondo, like most equipment connected to the Internet, can be updated and debugged via the Web. I was told that an update would be released later this summer.

Grace Digital says that the Mondo has a 3” woofer and a 1” tweeter -- as its name hints, it’s monaural. In fact, if you’re using stereo headphones, you’ll have to go into the settings program to change the Mono setting to Stereo. As a mono table radio, it sounded very good. It was especially good if you’re listening to talk radio. If you’re listening to music, you’ll find that it most likely won’t give you room-filling sound without distorting, though I think half the reports of bad sound can be attributed to bad broadcast signals.

There’s a two-band equalizer and some preset modes, such as Rock or Classical, but these sounded absolutely awful. I ended up setting the sound to Flat, which is not the default setting. To do this, I had to go into the equalizer program and select it.

Both the Grace Mondo and Logitech’s UE Smart Radio have a lot to offer. I think the biggest decider will be how you use a radio. If you’re going to carry it around to a lot of different locations, you’ll most likely prefer the Smart Radio, with its built-in rechargeable battery. Sure, Grace offers an outboard battery, but that’s another $40 and now two things to lug around -- it just isn’t as neat. (I strongly suspect that Grace’s next model will have the battery built in.) If you want clock-radio functions that really do the job and are going to leave your radio plugged into the wall, the Mondo might be the better choice.

The Mondo takes longer to buffer stations than the Smart Radio, and offers a smaller number of music services. Though the Mondo’s screen is larger, its resolution is not that high; it loaded my album covers into barely a third of the available space. On the plus side, the Mondo has stereo outputs -- you can use it with larger speakers, or even plug it right into your main sound system. Logitech offers a two-year warranty, Grace one year. That’s one for the UE Smart Radio.

Internet Radio is wonderful -- to hear so much variety without broadcast static is a revelation. When more stations begin broadcasting at higher rates, it will be even better.

As they say, you pays your money . . . Whether you choose the Logitech UE Smart Radio or the Grace Digital Mondo, I feel that, once you’ve experienced Internet Radio, there’ll be no turning back. I found stations that play Halloween or Christmas music all year round -- even one devoted exclusively to the music from Star Wars. Where else can you get that?