Coaxing the Best from Your Apple: the NuForce Icon iDo 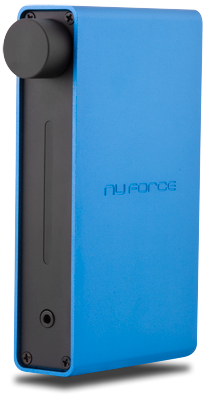 Be careful what you say in public. A couple of months ago, I flatly stated: "I’m also a believer in never using a piece of gear whose quality is way above the ability of anything else in the chain to pass it along. While I occasionally violate that rule, it just seems to me that when I’m driving the [head]phones with an iPod, no matter if the file is a 320kbps MP3 or a FLAC -- er, uh, excuse me, Apple Lossless -- the limiting device is the iPod. And though I’m sure I could get much better sound through the Wadia DAC/dock or something like it, I can’t fit the Wadia in my shirt pocket and walk around."

The first comment I heard in return was from a friend who’d found my fashion sense to be wanting. "You wear shirts with pockets?" he sniffed. "I don’t think I own a shirt with a pocket." Well, yes, I do stuff my iPod or iPhone in my pocket, put on my ’phones, and walk around. There’s something pleasing about strolling through an airport, oblivious to all the ugly sounds, with a bit of Ozzy blaring in my ears -- no more tears, indeed. Or walking some of the dirt trails around Austin letting Keith Jarrett establish my rhythm. To me, that’s these little Apple devices’ highest calling.

The other thing that happened was that the nice folks at NuForce sent me their Icon iDo ($249 USD), to try to convince me that an external box actually is worth the hassle. They think I’ll find the improvement in sound worth planting my butt in one place while listening to my headphones. I’ll have to -- the iDo is way too big to fit in my pocket, and anyway, it would be a short walk: its wall-wart’s cord stretches only 6’. But the Icon iDo bypasses the Apple iPod’s Achilles’ heels: its DAC, volume control, and preamp.

Here’s how it works. The Icon iDo is a little box measuring about 6" x 4.5" x 1". On the front is a 1/8" headphone jack, a volume control, and an LED strip to indicate the volume level. (Don’t want to damage those delicate ears the first time you play Pantera’s Cowboys from Hell.) On the back are an on/off switch, an input for the dreaded wall wart (could someone please make these things disappear from the face of the planet?), a USB input to provide power to your Apple device and accept its digital output in return, and three RCA jacks, one labeled Digital, the others Right and Left. Power the iDo up, attach the supplied USB cable to the iDo and your Apple device, plug your headphones into the jack on the front, and set the volume. You’re done. Unlike some other current devices that seize control of your Apple device, the iDo allows -- nay, requires -- you to use the Apple’s system to select and play files.

A note to you yahoos who use something other than an Apple device: It will probably work with the Icon iDo, but NuForce has designed the product to work with Apple designs, so no guarantees.

The Icon iDo’s USB input lets you acquire a pure digital output straight out of your Apple device, with virtually no jitter. If your 160GB iPod is filled with m4a files, then the old maxim of garbage in, garbage out will burn you. But if you’ve been scrupulous about using only the best file-saving systems, the iDo can open up a whole new world of excellent sound.

I used Sony’s MDR-V6 headphones ($109.99), which have been in production for almost 30 years. You’ll find them in almost every recording studio and radio station on earth because they sound nearly perfect, and are sturdy and remarkably comfortable. Mine are 25 years old and still in flawless operating condition. I also used Audio-Technica’s ATH-M50s, the ’phones I use most often with my 160GB iPod Classic and iPhone 3GS.

Like virtually everything NuForce makes, this little beauty did all it was asked to do. But . . .

Do you obsess over bits and sampling frequency?

About two-thirds of the way down the webpage devoted to the Icon iDo on NuForce’s quite useful website is the following fine print (their italics): "*The maximum sample rate currently supported by Apple is 16-bit/44.1kHz or 24-bit/48kHz." The iDo is aimed at the Apple market, and Apple’s wisdom is that ultra-high-resolution files really aren’t necessary. Whether or not you agree, the reality is that there are now hundreds of millions of these devices in the world, containing tens of billions of songs that aren’t hi-rez. Still, the Icon iDo is a DAC that offers outrageously good sound quality.

It really shone with recordings in which you can actually hear the room the musicians performed in. Patty Griffin’s 1000 Kisses (CD, ATO Records 21504) has an amazingly open sound. But when I ran the music straight from the iPod to the headphones, it sounded echoey. Then I plugged in the iDo: Instead of echo, I was magically transported to the recording studio. Listen to Griffin sing "Mil Besos" and you’ll feel as if you could crawl right into her lap -- and you’ll want to. (That scoundrel Robert Plant gets more than he deserves.) Kudos to the folks at Doug’s Basement, in Nashville, the recording studio that made the magic.

Another good example is Kenny Rankin’s Because of You (1991). In Irving Berlin’s classic "Always," Rankin’s delicate tenor voice sends a sexy breeze through the room. Again, straight through the Apple DAC, it sounded like nicely judged reverb. When I switched to the iDo, I could hear the walls of the studio.

The Blue Nile fans will be thrilled to hear that Paul Buchanan will soon grace us with new music. Mid-Air, his first solo album, hits the stores May 21, and we can only hope that a tour will ensue. For those who never caught the bug, those first two Blue Nile albums, A Walk Across the Rooftops (1984) and Hats (1989), still manage to sound modern, romantic, and full of hopeful wisdom. They also sound incredible, with distinct percussion, ringing guitars, and purring synthesizers. For quick proof, try one each from those albums; respectively, "Heatwave" and "Let’s Go Out Tonight." Again, the difference between the iPod and the iDo is that sense of being in the room.

If you’re looking for more modern music that sounds great through the Icon iDo and headphones, here are some tracks to add to your favorite iTunes playlist:

Lady & Bird: "Malmo Livs." Keren Ann and Bardi Johannsson will blow your eardrums, but the sound is soooo clean.

Fink: "Sort of Revolution." Starts quiet, then dubs out into Deep Bass World.

Peter Gabriel: "Heroes." Can a cover be better than an original? Watch out, Ziggy.

Tom Petty: "First Flash of Freedom." He can still write a classic tune.

Gretchen Parlato: "Henya." Just as cuddlesome and even sexier than Patty Griffin’s 1000 Kisses.

Mia Doi Todd: "Canto de Iemanjá." Todd’s music is always interesting through headphones because she pays careful attention to the details. In this cover from Baden Powell’s classic Os Afro Sambos, she manages to be both reverent and singular.

Death Cab for Cutie: "Unobstructed Views." In which the Cuties go all psychedelic.

The Stepkids: "La La." I was late turning in this article partly because of South by Southwest, this little local music festival we have. The highlight for me was The Stepkids, three white guys who play modernized 1970s Chicago psychedelic soul. They come by it honestly, having backed Alicia Keys, 50 Cent, and Lauryn Hill, but, oh my God! Get thee to see this band ASAP! 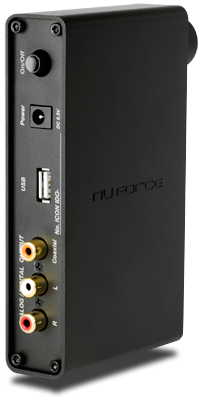 OK, so I’m smitten with the NuForce Icon iDo. But don’t get me wrong -- the iDo is not a $249 replacement for a Naim NDS (with all options, about $20,000), and it won’t play 24/192 FLAC files. What it does is give you the very best sound possible from an Apple music device by pulling the digits out before they ever hit the Apple’s DAC, then running the bit-perfect signal through the NuForce’s own jitter-choking converters. It’s an especially nice solution for anyone who carts their music collection around on an iPhone/iPad/iPod.

As much as I appreciated the improvements in headphone sound wrought by the iDo, I have to admit I was intrigued by the two RCA output jacks on its rear panel. Using those, not only could you have a nice headphone system, but the addition of a pair of good-quality active monitors could make it the heart of a small system based on any of Apple’s music producers. Look for a pair of active speakers designed to be used in the nearfield (i.e., not more than 8’ from your head). Such a system would not only play loud, it would image better than many multi-thousand-dollar behemoths.

My picks in the sweepstakes of powered desktop speakers for under $1000 would be the Mackie HR624 Mk.2 ($998/pair), the Dynaudio Acoustics BM 5A Mk.II Studio Monitors ($900/pair), or the Paradigm Shift A2 ($560/pair). Pick a subwoofer -- say, one of the Sunfire Trues with line-level in and high-pass line-level outs -- and you could have a complete, compact system that could still show a bit of audio ferocity when cranked up.

Each of us has his or her own way of interacting with music. As I said at the top, I like to listen to my Apple devices when on the go. But I see lots of people in my hometown who store their entire music collections on their phones; if that describes you, the NuForce Icon iDo is a great way to discover how good those digits can actually sound.