Save Yourself Some Trouble: What I’ve Already Learned About Computer Audio, Part Two

My system, as it stood last month, was the RME Fireface 800 digital processor, Dell XPS de garbage computer, Digidesign RM-2 speakers, a Gallo TR-3 subwoofer, and lots of CDs. The first order of business was to replace the Dell. That’s when I discovered Rain Recording.

We’re getting out onto a skinny branch of what listening to music from a computer can mean. The folks at Rain serve professional musicians (and the occasional gifted, well-heeled amateur), especially those who are crazy for the delicacies and intricacies of music. By that I mean professional sound people in the fields of film scoring, music mastering, live performance, you name it. Rain makes computers that are rugged, rack-mountable (thank heavens), and quiet.

And powerful. Mine is an Ion 64, about a year old. Rain has much more powerful machines now, but I still have Windows 7, 64-bit Professional, AMD Phenom 9850 Quad-Core Processor, 8GB of RAM, and direct input from and output to the Fireface 800 via a FireWire 400 cable to the PC, which offers a direct digital feed to my speakers, or an analog feed at whatever rate I care to use. The current equivalent of my model runs about $2500. Want more? Rain’s new Ion Studio uses the Intel Westmere Xeon 6-Core brain, with 24GB of RAM and 6TB of high-performance storage. Now that will make some music. For about $6000.

For another $299, Rain includes a dealmaker offered by no one else I’m aware of: Raincare Encompass. Ever had one of those terrible experiences where your computer crashes, and each support center you call blames it on someone else? I call Dell, they blame it on Cakewalk. I Call Cakewalk, they blame it on Kontakt. You get the idea. This will never happen to me again. I just call Rain and they help me -- no blame game, just let’s get it fixed. I can’t tell you how much joy this single feature has brought me. But on top of that, it is impressively quiet and built with the quality of a musical instrument, which is what it really is.

Rain offers another service that’s vital for folks who want to stream high-resolution recordings from their computers: They test other people’s products, name names in terms of what works and what doesn’t, and thus help avoid costly problems with incompatibilities. A nice touch.

The next decision was where to store my music files. I began by using whatever cheap hard drive I could get, and ripping 320kbps MP3 files. This worked just fine for casual background listening. But after losing a hard drive or two, I decided to move up in quality to Seagate FreeAgent Pro. They had the best warranty for the price and size of drive, and I could choose among eSata, FireWire, or USB connections. And everything is backed up nightly, automatically.

Two English publications also have hi-rez sound on their radar. Gramophone has a monthly column about where to find good classical-music downloads; and for those who believe, as I do, that professional gear offers a good alternative for a home music system, then Sound on Sound offers excellent reviews of professional music-monitoring equipment aimed at people who lack unlimited expense accounts.

I strongly advise that you rip or download your music at the highest possible resolution. The cost of digital storage continues to drop almost as quickly as the cost of processing devices. Currently, 2TB hard drives go for about $100; each will hold about 65,000 songs in the WAV format, or a bit over 300,000 songs as 320kbps MP3s. Either way, that’s a lot of music; don’t skimp with lossy rip rates.

What all true audiophiles seek is the holy grail: a sound source of whatever format that sonically matches the sound of the master tape. With cheaper storage, faster download rates, and higher-definition recorders all hitting at once, a few startups have begun offering downloads of genuinely high quality.

One site where I spend entirely too much time is the Internet Archive. Some generous bands who allow stealthy tapers to capture live shows also allow them to make their recordings available to other fans for free. These have various quality levels, but this site was one of the first I found that offered 24-bit recordings for download. Charlie Hunter Live at the Knitting Factory is a 24-bit, FLAC-encoded (i.e., lossless) recording with amazing percussion sound. Track 4, "Improv," features a percussion solo that completely negates any preconceived notions ("Omigod, yuck, another drum solo!"), and offers a stunning close-up perspective of quietly tapped and bent instruments, some tuned, others spreading into a bed of sound. The solo lasts only 2:30, but what a great test of a system’s resolving abilities. And of earth-shattering importance for those of us willing to admit to a tendency toward Deadheadedness, the Internet Archive is the repository of the most extensive collection of live Grateful Dead material on the Web, including over 1000 concerts in hi-def sound. If you’re so inclined, search out the meticulous 24-bit recordings mastered by Charlie Miller, many of them originally made by Betty Cantor -- for Dead fans, that’s the gold standard. And thank you, Lord, it’s all free.

Two other places where I spend entirely too much time are www.linnrecords.com and HDtracks’ 96kHz/24-bit Store. Linn calls their Studio Master recordings "the highest-quality music file available." Puffery? I’m not sure. Try their recording of John Butt and the Dunedin Consort’s performance of J.S. Bach’s Mass in B Minor (Linn CKD-354). Butt uses Joshua Rifkin’s concept of just one or two singers per choral part, instead of the usual 20 sopranos, 20 altos, etc. The clarity is lifelike. In the Dona nobis pacem (track 27), the complex choral parts are perfectly defined; at 2:05 in, the trumpet’s quiet entrance foreshadows the arrival of the timpani in a gorgeous paean, converting -- in a way I’ve never heard before -- a plea for peace into a triumphal, almost royal announcement of victory. Great sound and great performance in one recording. That’s rare.

William Orbit’s My Oracle Lives Uptown (Linn AKH 351) is offered in a 24-bit FLAC file. I had on hand an MP3 mix from eMusic, who rely on MP3 files with bit rates from 190 to 250kbps. Track 2, "Purdy," makes a good comparison: At 2:50 into the song, a synthesizer rolls in. Ten seconds later, there’s the faint sound of a woman inhaling. Sexy. In the lossy MP3 formats, the burr of the synth sounds is carved off by the compression and the inhalation is buried in the mix. On the 24-bit FLAC, it raises the little hairs on the back of my neck. And Pink Floyd fans should listen closely to the end of the song, where Orbit quotes "Echoes."

Unfortunately, Linn has seen fit to omit The Blue Nile, their finest group ever. Their spectacular recordings cry out for the hi-def treatment, but they’re nowhere to be found on Linn’s site. We can only hope. All Linn purchases include hi-rez cover art, inlay, and booklet, and Linn works with several other labels, including some -- Channel Classics and Fonè -- that make dependably superb recordings.

HDtracks offers infinitely more music than does Linn. To start off, HDtracks has many of the top classical labels: Naxos, Telarc, BIS, ASV, Dorian, Chandos, ECM New Series, and dozens more. In terms of jazz, they have the top jazz label, Concord, as well as Impulse!, and smaller labels like American Clave, Sunnyside, MaxJazz, ECM, and Chesky (including, hallelujah, Dave’s True Story!).

I’ve also downloaded from eMusic, Rhapsody, Wolfgang’s Vault (a favorite), iTunes, Amazon, Windows Media, and many others. All use lossy systems, which I find perfectly adequate for background music, so long as I keep my MP3 files running at the top rate of 320kbps. It’s only when you listen carefully at high playback volumes that the differences between 320kbps and higher resolutions become apparent.

Unfortunately, many of these services don’t offer 320kbps files. Most use Variable Bit Ratios (VBR), which average 220-250kbps. Wolfgang’s Vault even brags about how its VIP members (count me in) "get 192kbps streams, double our standard bitrate. You will love the quality difference and please don’t blame us if it prompts you to buy better speakers." While the statement is laughable, the music is sublime: a collection of recordings from Winterland and the Fillmores East and West, rescued from the personal collection of the late impresario Bill Graham. If bands like Jefferson Airplane, the Grateful Dead, the Allman Brothers Band, and Miles Davis grab your interest, Wolfgang’s Vault has a serious collection of previously unreleased live broadcasts. Those old enough to remember the King Biscuit Flour Hour will also find a treasure trove.

With all this music available, the final choice was a music player. That market is crowded. iTunes has some quirks I don’t like -- for instance, when I try to highlight files, if I go one file too far, instead of just backing up, I have to start over. WinAmp has almost as many add-ons as an iPhone, but the advertising bothers me, although it does have one specific use for Deadheads. Rhapsody lacks a decent search function. And it always feels to me as if Windows Media is trying to take over my whole computer. 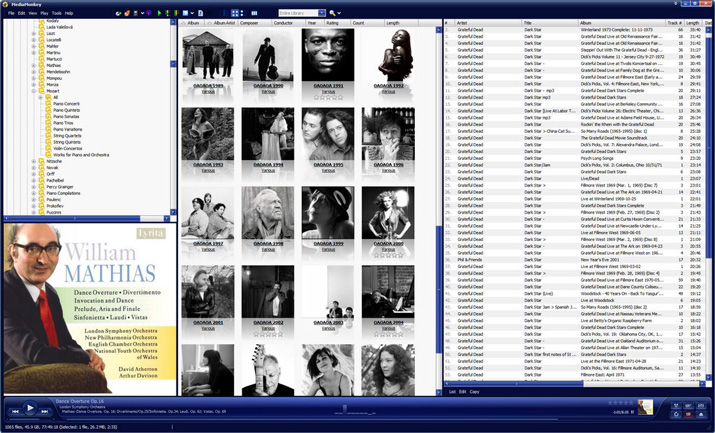 The winner is the Gold Version of MediaMonkey. Their community of brilliant experts seems to be waiting by their computers at all times, day or night, just hoping to answer my vaguest questions. I can catalog my entire collection, not just what’s on my computer. And 24-bit/192kHz is no problem; in fact, MediaMonkey is HDtracks’ recommended music player. There are enough skins to give you any look you can imagine. And when I called a helper at Raincare Encompass, I received a knowing nod of approval -- even he uses MediaMonkey.

The only other program I occasionally fall back on, because it really is the best ripper in the universe, is Exact Audio Copy. For poorly recorded live recordings, or those few occasions when I feel the mastering engineer did a bad job on a CD, I rely on Sound Forge and iZotope’s Mastering Effects Bundle. And I use a Monster Pro 3500 power conditioner ($300) to protect my investment.

So there you have it: RME Fireface 800, Rain Ion 64 computer, Seagate external hard drives, Digidesign RM-2 speakers, Gallo sub, the best sources of downloads I can lay my hands on, and MediaMonkey. It took a lot a sweat and tears to get to this point. I can’t claim it’s the greatest computer-based music-playback system on earth, but it certainly works for me, and delivers a lot of joy, day after day. May you love yours as much.