From Norah Jones to my friend and homegirl Kellylee Evans, there has been a trend among up-and-coming women jazz singers to make the jump to more commercial music as soon as they make their initial breakthrough. Who can blame them? Pop is where the large audiences -- and money -- live.

Macy Gray, who came to prominence in 1999, at the age of 31, with the single “I Try” from On How Life Is, is running against the trend and promising to reverse her fortunes in the process.

She won a Grammy Award for her performance of “I Try” and was nominated for two more Grammys in 2001, becoming one of the most prominent pop singers in the early years of the century -- arguably in the same space Beyoncé occupies today. Poor timing (her sophomore album, The Id, was released a week after 9/11) and worse personal choices blocked her from repeating her success. She continued recording and touring, and developed a sideline acting career, but by 2010 most of the press coverage about her focused on her drug use or other excesses.

In 2013 Gray surprised jazz fans by showing up on Be My Monster Love by veteran saxophonist David Murray and then touring on the jazz festival circuit with him. That seemed like a one-off collaboration, but earlier this year she signed a contract with Chesky Records, the label known for audiophile recordings featuring jazz artists like Javon Jackson and John Abercrombie. Lately, Chesky has been expanding its series of Binaural+ recordings, made using microphones calibrated and positioned to mimic the human ear and captured in high-resolution digital.

Featuring guitarist Russell Malone, trumpeter Wallace Roney, bassist Daryl Johns, and drummer Ari Hoenig, Gray’s Stripped is ideally suited to the massive soundstage that binaural recording provides. Hoenig, a versatile stalwart of New York’s contemporary jazz scene, is a particularly subtle and sensitive accompanist, while Malone honed his sound during years of touring and recording with Diana Krall. The intimacy and immediacy of the recording (Stripped signifies both the raw emotional terrain of the ten songs and the sonic atmosphere) leave nowhere to hide, and every instrumental and vocal nuance is highlighted. If Gray’s musicality was ever in question, it is not now; even at the lowest volume it is beautifully gruff and lyrical. 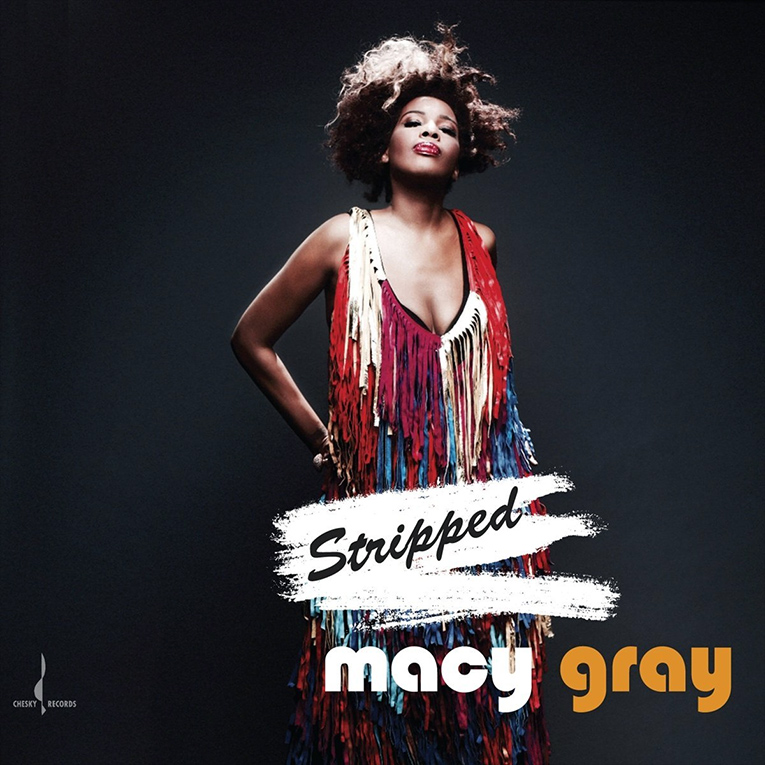 The transparency of the recording technique is unforgiving at times, as when Johns’s strings clatter against the neck of his bass on his solo on the ska-tinged “She Ain’t Right for You.” But it’s a small price for how present the music feels.

The breakout success of singer Cécile McLorin Salvant has shone the spotlight on the “blues queen” tradition embodied by Bessie Smith, Ma Rainey, and Ethel Waters, and Gray visits that territory on the opening “Annabelle” -- one of seven co-written originals on Stripped. A slow drag with gorgeous guitar work by Malone, the song has the effect of transporting the listener back to the 1920s, minus the primitive recording techniques of the era. The aching lyrics, which refer to the “sweet torture” of love, are a perfect fit for Gray’s highly textured voice. Overall, the piece sounds like an offhand jam between the five musicians, with Gray very relaxed, effortlessly riding Hoenig’s beat.

As if to boldly illustrate the bridge between where she was 17 years ago and where she is now, Gray includes a new take on her biggest hit, replacing the layered voices, keyboards, strings, and atmospheric reverb of the original “I Try” with just Johns’s bass and Malone’s wistful electric guitar, and the naked quality of the performance is reminiscent of hearing Amy Winehouse sing unaccompanied and unfettered by stardom in the home videos that were included in Asif Kapadia’s documentary of the late singer.

This is highly personal material, with Gray sounding extraordinarily vulnerable when she sings “There are moments in the day when I can’t breathe” on “First Time” and “You don’t hit me back when I text you / And I don’t need no glasses to see / That you’re walking away from me” on her exceptional original, “The Heart,” which has echoes of some of Prince’s best love songs.

The only false step on Stripped -- and, then, only from a thematic angle -- is the inclusion of Bob Marley’s “Redemption Song.” While it is a highly sensitive interpretation, with a strong contribution from Malone, it moves the listener out of the emotional arc that Gray has created.

It would be unfair to infer that Gray has ever been so far removed from music that she needs a comeback album to remind listeners of the depth of her artistry. Her talent has never been in question even though she has not repeated the success she found with her first recording. That stated, this is the kind of recording that makes people re-evaluate an artist. It has no pretense, no artifice, and with its bare, highly detailed sound it makes a very powerful case for revisiting everything we thought about Gray’s place in contemporary music.