By definition, improvised music lives in the moment, and jazz, the musical genre most closely associated with improvisation, is an art form obsessed with constant innovation. It is unusual for jazz to look backward, but two nostalgic trends -- both related to trumpeter Miles Davis -- broke with tradition and were surprisingly long-lived.

Triggered by trumpeter Wynton Marsalis’s multiple-Grammy Award-winning emergence from his teenage apprenticeship with drummer Art Blakey, the so-called Young Lions movement paid homage to the musicianship and sartorial style of Davis’s mid-’60s quintet. More unusual was the move by a handful of musicians -- several years after Davis’s death in September 1991 -- to revisit the type of music the late trumpeter had made after his classic quintet had disbanded and Davis had adopted electric instrumentation. Vintage Fender Rhodes pianos were dusted off, trumpeters plugged into wah-wah pedals, and electric bass players focused on holding down a funky groove in the style of Michael Henderson.

Among those bassists was a young Vancouver-based musician named Chris Tarry. I first encountered him in the mid-’90s when he was playing some Davis-inspired electric jazz at a low-key venue at the Ottawa Jazz Festival. Within a couple of years, he had brought together popular Toronto-based saxophonist Mike Murley with Vancouver trumpeter and keyboardist Brad Turner and drummer Ian Froman, who had relocated from his native Ottawa to New York City. They first got together in Vancouver in November 1996, knocked out 11 songs in two days, and went their separate ways.

Released on an independent label called Maximum Music, which had a distribution deal with Universal Music Canada, Metalwood stunned the Canadian jazz community when it won a Juno Award the following year.

The members of the quartet always knew they had a distinctive chemistry; now, they had some industry credibility to back it up. A year to the day after their initial recording session, Metalwood returned to the same Vancouver studio to record another dozen pieces, and as if following a script, Metalwood 2 captured another Juno Award. At this point, Metalwood had everyone’s attention, both inside Canada and in other markets.

Heavy touring followed, along with Metalwood 3, released in 2000, and the following year The Recline was released. With widespread international distribution by Telarc and a dancefloor remix, The Recline stood apart by including two former Davis bandmates -- guitarist John Scofield and percussionist Mino Cinelu -- as well as turntable artist DJ Logic. A fifth album, Chronic, was released in 2003 on Blue Thumb -- a 1960s boutique label that had been revived by Universal as a sub-unit of Verve.

Throughout that seven-year arc, Metalwood remained an anomaly, with members spread from coast to coast in two separate countries. By 2003, Tarry had relocated to Brooklyn and launched an active career as a session player there, Murley had moved into academia, and Turner had grown increasingly busy in Vancouver, while Froman continued a hectic teaching and touring schedule. It was little surprise when the band ceased to be an active unit.

What is perhaps even less of a surprise was that the four members eventually got the itch to revisit the chemistry they had found, so tentative plans for a reunion were floated in 2011. Nothing came of that, but five years later Tarry and Cellar Live label head (and former Vancouver club owner) Cory Weeds got serious about the project, and Tarry and Turner began writing new material. 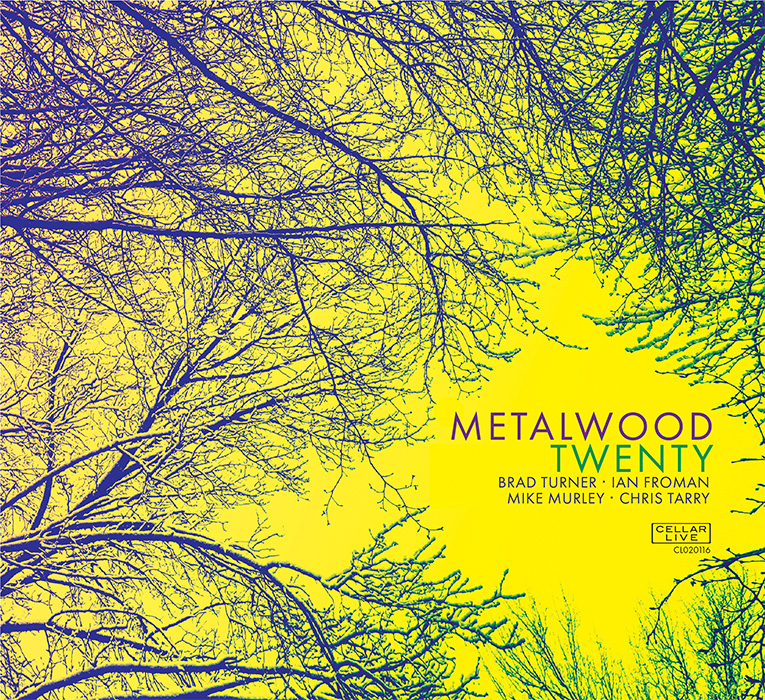 For Twenty, the band’s nexus shifted to Toronto, but a key element returned along with the four musicians: producer, engineer, and mixer Shawn Pierce, who played as large a role in shaping Metalwood’s studio sound as the legendary Teo Macero had for Davis in the ’60s. Although Pierce handed the producer role to Tarry and Turner for Twenty, his ability to blend acoustic and electric instruments and make music like Metalwood’s take on depth and urgency plays a huge role in making Twenty sound vital and fresh.

It also sounds broader and more sophisticated than the Metalwood of 15 to 20 years ago. Compositions like Turner’s “Clutch” and Tarry’s “Gargantua” find the band exploring sub-themes and interlocking instrumental parts that were largely absent on earlier recordings. While albums like Chronic were very focused on riff-based, highly rhythmic tunes, Twenty also includes more atmospheric explorations without completely losing the danceability quotient, which is here in spades on pieces like “The Past Before You” and “Bodybeard.”

Turner’s “Good Things (for Good People)” propels the group’s sound back in time to an earlier Davis period, blending trumpet and sax over a fluid tempo that is highly reminiscent of the quintet with Wayne Shorter, Herbie Hancock, and Tony Williams. “Gargantua” pushes the soundscape in the other direction, with an open-bell trumpet and repetitive bass figure that sounds very much like Davis’s mid-’80s bands.

All comparisons to other time periods and other bands are meaningless, except as signposts, of course. Metalwood stands apart by combining four strong, individualistic voices -- each among the best players of their generation to have come up through Canadian improvised music -- and Twenty is an excellent illustration of how each of those players has grown and matured since they last worked together. It is good to have them back and good to hear that they have lost neither their sense of humor (particularly when it comes to both composition titles and trashy electronic sounds like those on “Solidarité”) nor their drive. Twenty sounds as energetic as the band in its prime.