In the late 2000s, not long before Troy “Trombone Shorty” Andrews began landing gigs at the White House and on late-night network TV shows, I worked twice with the New Orleans musician at the Ottawa Jazz Festival, where I was the media resource. The first time Andrews appeared there, he was an unknown support act; the following year, he headlined. Both times, he put on astounding live shows that were equal parts Crescent City parade music and guitar-powered Southern rock.

Andrews’s rapid rise, hugely boosted by his role on the popular HBO TV series Treme, has been propelled by the very attributes that make Lifted the ideal sonic tonic for these troubling times: enormous charisma, an optimistic attitude, and the ability to expertly tap into a wellspring of influences that includes the Isley Brothers, Sly Stone, and Curtis Mayfield.

Although many of us have been experiencing feelings of uncertainty, fear, and anger in our current social landscape, Andrews stays resolutely positive, even while singing heartbreak lines like “Forgetting takes a long, long time.”

While guitarist Pete Murano, who supplied the rocking guitar sound in Andrews’s earlier bands, is still onboard, Trombone Shorty the band is a more amorphous unit on Lifted. The addition of guests like guitarist Gary Clark Jr. and the New Breed Brass Band makes it one that can stretch to cover multiple styles.

Trombone Shorty the performer has developed his tuneful voice into a powerful R&B croon, and his virtuosity on his namesake instrument has taken a backseat for a more unified group presentation. 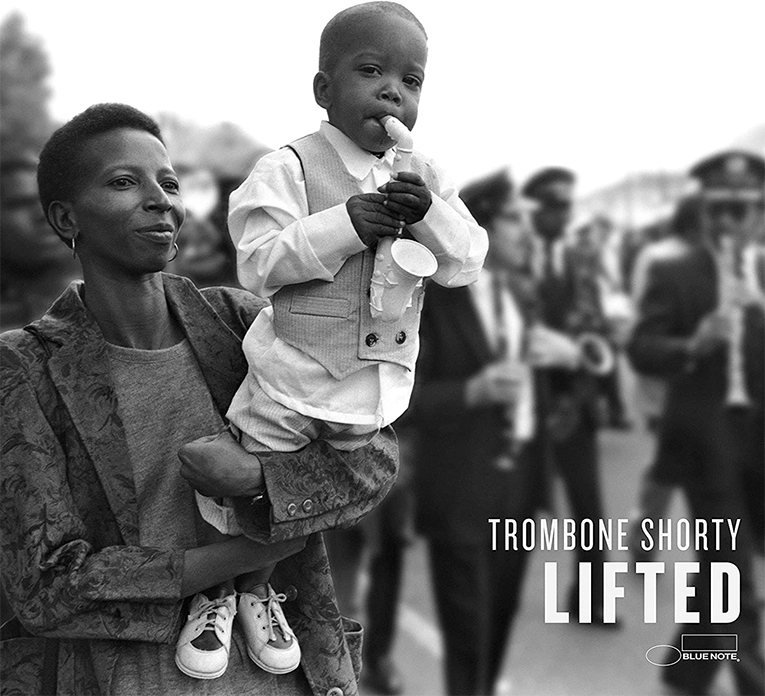 The opening trio of songs on Lifted demonstrate just how much musical territory Andrews can comfortably occupy.

Spiked with simple, uplifting horn lines and driven by a propulsive bass-and-drums combination, the opening “Come Back” exhibits Andrews’s innate love of danceable social music, which gains much of its power from heavily rhythmic arrangements like the elemental drums, organ, and guitar vamp that forms the song’s coda.

“Lie to Me” follows, with sharp-edged funk empowered by Chris Pierce’s background vocals, which give the song the force of a stirring work chant. Although the song is clearly a product of southern Louisiana, there is something in the way that Andrews and his producer, Chris Seefried, approach recording that is redolent of UK soul artists like Terence Trent D’Arby and Simply Red.

The third song, “I’m Standing Here,” takes a hard left turn into crunching rock territory, thanks to a huge-sounding guitar vamp reminiscent of some of Jimi Hendrix’s later compositions and Clark’s loopy solo. Here, Andrews drops in his first major trombone solo, showcasing his singular voice on the instrument.

In a later track, Murano displays his guitar chops on the title song—another rocker with a whipsaw riff. Pierce again provides effective backing vocals, this time with Marley Munroe (who performs under the name Lady Blackbird).

Elsewhere, Andrews and his rotating crew of musicians lighten things up, cruising into the Philly Sound–influenced “Forgiveness” and the funky “Everybody in the World,” which leaves no doubt about its New Orleans origins.

The sole misstep on Lifted, one that seems incompatible with the album cover image of Andrews’s mother holding him aloft at a parade in the late ’80s, is “Miss Beautiful”—a bass-driven song that’s designed for the dance floor. “Light it up,” Andrews sings. “That frown you wear / Don’t match your hair.” Long before #MeToo, independent women bristled at men telling them to smile. Andrews seems not to have noticed.

Lifted is Andrews’s second album for Blue Note Records. At this point, he likely feels his charisma can allow him to skate past any criticism of such a sexist trope, and he may well be right. Andrews’s explosive ascendancy as a solo artist and bandleader is evidence of the widespread enthusiasm for his brand of optimism and charm. Like his older homeboy, Harry Connick Jr., Trombone Shorty is seen as a vital keeper of the New Orleans flame. That fire was almost extinguished by Hurricane Katrina and the years of urban mismanagement that followed, but if there’s one thing Troy Andrews is set on doing with his music, it’s keeping things lit.