“A Face in the Crowd”

In the summer of 1953, Andy Griffith was in Manteo, North Carolina, playing Sir Walter Raleigh in The Lost Colony, the longest-running outdoor production in the history of American theater. That same year, as Deacon Andy Griffith, he recorded the comedy monologue “What It Was, Was Football” for Colonial Records. It was only Colonial’s third recording, and when Capitol Records took it over and put their own label on it, the record became one of the most popular comedy singles of all time, with sales of almost 800,000. I was 12 years old, and Colonial was on a street in Chapel Hill, North Carolina, that made a T intersection with the tiny street on which I lived with my parents. My dad knew someone who had a connection, and took me down to meet Griffith. He was warm and friendly, pretty much like the character he later played on TV in The Andy Griffith Show (1960-1968).I liked him a lot.

Griffith had met director Elia Kazan not long after the latter had directed On the Waterfront (1954), and in Kazan’s new film, A Face in the Crowd (1957), did a bang-up job of portraying a nasty egomaniac -- which may have been why my folks wouldn’t let me see Griffith in his first film role. No doubt they were right -- I might have enjoyed the hilarious montage of vitamin commercials midway through, but probably little else.

A Face in the Crowd is based on “The Arkansas Traveler,” a short story by Budd Schulberg (who also wrote the screenplay), and is really quite simple. An enterprising journalist, Marcia Jeffries (Patricia Neal), discovers Larry “Lonesome” Rhodes (Griffith) in a rural jail and begins to shape his career as a TV star. He quickly becomes beloved for his laid-back, down-home humor, but as he rises to the top, his ego, always there but held in check, begins to overshadow everything else. Offscreen and off-mike, he derides his public as stupid, and thinks he can control everything. When he crashes and burns, it’s not pretty. 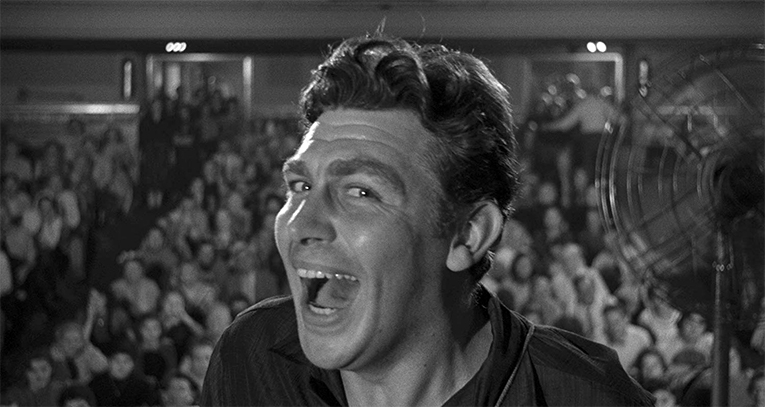 We know from the start that Lonesome is not the nicest person on earth. His trademark laugh, loud and raucous, is all too revealing of his character when heard today at home in front of a big flatscreen -- the grating guffaw feels like fingernails on a blackboard -- but somehow becomes treasured by his fans. His public likes him only because Jeffries and Joey DePalma (Anthony Franciosa) have figured out how to sell him, and they use Lonesome to sell Vitajex, a faux vitamin pill, on his show and in ads, and then to sell, endorse, and promote a local politician.

It’s often said that Elia Kazan was an actor’s director. Here he elicits superb performances from his cast -- all of the leads, plus a young Walter Matthau as Mel Miller, chief writer for Lonesome’s TV show; and Lee Remick in her film debut, playing Betty Lou Fleckum, a teenage drum majorette.

Criterion’s transfer of this black-and-while film is wonderful. The images are crisp as a November morning and absolutely clean, with nary an artifact in sight. The contrast is perfect, the shadow detail impressive. The monaural soundtrack clearly delivers both dialogue and music. 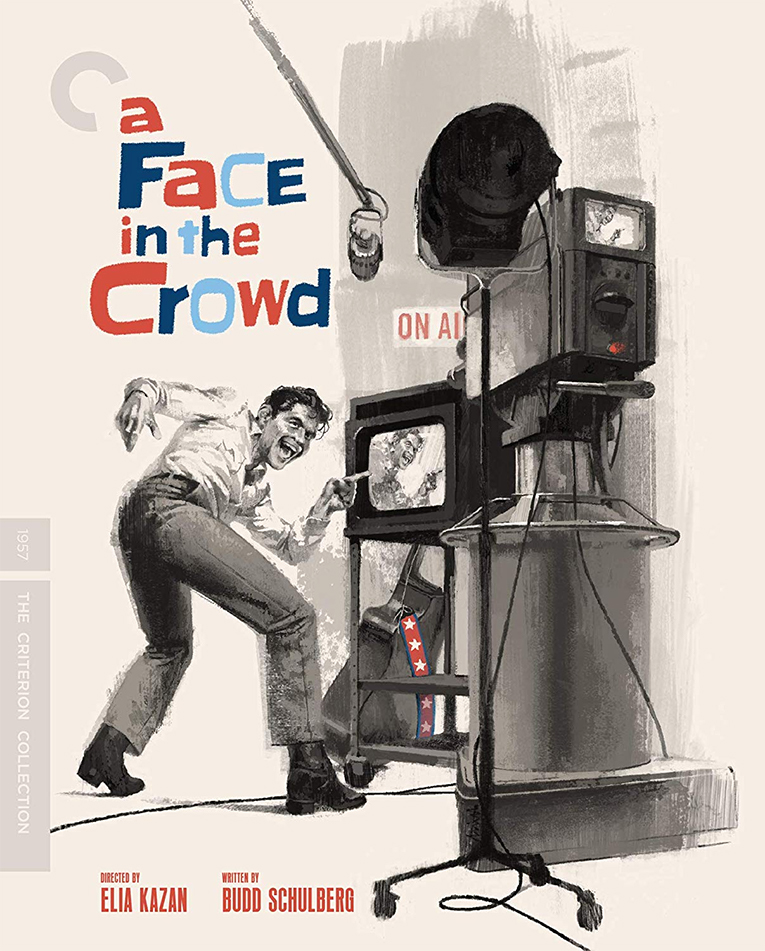 Extras include interviews with author Ron Briley, who speaks about Kazan’s legacy, and Andy Griffith biographer Evan Dalton Smith. An interesting documentary, Facing the Past, features Griffith, Neal, Franciosa, Schulberg, and film scholar Jeff Young. The booklet is full of material: an essay by April Wolfe, excerpts from Kazan’s introduction to the film’s published screenplay, and a profile of Griffith published in 1957 in the New York Times Magazine.

In A Face in the Crowd, Elia Kazan elicits from Andy Griffith the performance of a lifetime. Several times in the extras Griffith talks of how much it took out of him to portray such a mean guy -- that it took three months to make the film, and four months to get over it. I’m glad he did, and that he came back as the same nice man I met at Colonial Records.

Be sure to watch for: The bar scene with Mel Miller and Marcia Jeffries, in which Miller decries commercialism and television’s part in it. You’ll never see better or more understated acting.