In the very basic plot, two small-town teens, Mike Tobacco (Grant Cramer) and Debbie Stone (Suzanne Snyder), in a scene that nods to The Blob (1958), see what looks like a mysterious meteor strike the earth on the other side of a hill. They set off to find out what’s made the commotion, and when they get to the site of the impact, they find a big circus tent. Eventually it becomes clear that clowns from outer space have landed, and the tent is their disguised ship. From then, the clowns kill off the population as Mike and Debbie try to convince the police of what’s actually happening.

The clowns are funny -- and terrifying. They do the things we expect clowns to do, but those actions turn into horror. They have big red lips and bulbous red noses, but when they open their mouths we see dirty pointed teeth -- lots of them. They make cute little balloon animals that turn out to be chase dogs. A cream pie thrown at a security guard melts him into a pile of ice-cream-like goo -- the last clown leaving the site tops the pile with a big red cherry. What looks at first like cotton candy turns out to be a material that wraps its victims in cocoons. There are many more sight gags and references to the circuses and films of the era. If you’re a sci-fi geek from the ’50s through the ’80s, you’ll revel in this. If not, you might find the whole thing entertaining anyway. 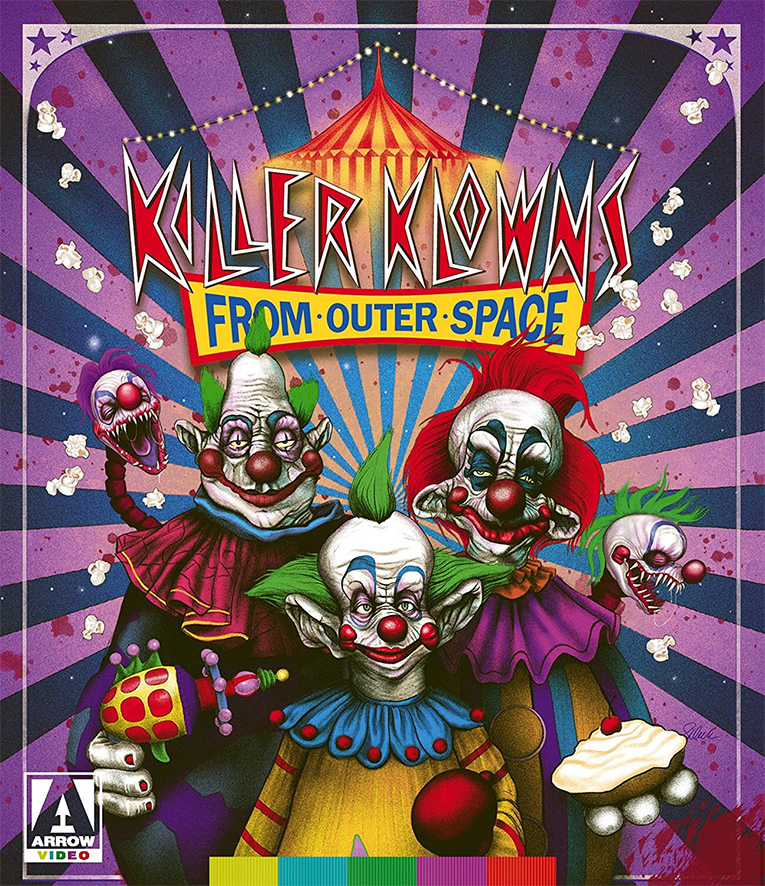 Arrow Video has been giving such cult favorites the kind of treatment the Criterion Collection bestows on film classics: filming interviews, providing informed commentaries, and restoring the films themselves. Killer Klowns from Outer Space has been given a to-die-for 4K transfer. All of the bright colors of the circus are there, but there’s no bleeding. Human skin tones are realistic, clown skin tones garish. The level of detail is super -- I can see lots of things in the background that were hard to make out in the old MGM DVD. Two soundtracks are offered: the original Dolby Surround, which produces surround sound by plucking it from the front channels, or Arrow’s new discrete 5.1-channel mix. I chose the latter and was quite satisfied.

The extras are plentiful and diverse. All of the “making of” featurettes from the original MGM DVD are included, plus some new ones from Arrow. These include an interview with Leonard Graves Phillips, lead singer of The Dickies, the L.A. rock band that provides the music for the opening credits. (The band is still in existence, in case the Chiodo Bros. pull a sequel out of the hat.) There are lots of stills and production photos, as well as bloopers, deleted scenes, a 24-page booklet, and a reversible cover. It’s an outstanding set of extras, and there’s much more -- enough to make this movie an enjoyable project for a weekend off the rails.

Killer Klowns from Outer Space needs to be seen to be believed -- and enjoyed. The Chiodo Bros. crafted it from imaginations of seemingly bottomless creativity. Suspend belief and have a wild ride.

Be sure to watch for: In one of the film’s more bizarre scenes, a large clown sits bigot police officer Curtis Mooney (the scene-stealing John Vernon) on his knee like a ventriloquist’s dummy. Mooney says a few words and dies. Most of the other scenes in this film have a modicum of black humor, but this one is uncomfortably real.