Rita Hayworth at Her Best

Rita Hayworth is Gilda. Gilda is Rita Hayworth. They’ve become synonymous -- to mention either name in conversation conjures up the other. Her entrance, tossing her hair and saying “Me?,” has become iconic. The movie changed Hayworth’s image overnight in 1946 -- from healthy, all-American girl next door to Hollywood’s reigning sex symbol, an accolade she enjoyed for a little less than a decade. She then moved on to more matronly roles, then to alcoholism, and finally to Alzheimer’s.

Gilda opens with a memorable entrance for Gilda’s antagonist and lover, Johnny Farrell (Glenn Ford): As he shoots craps toward the camera, the dice settle in the foreground. The setting is Argentina, and Johnny is fleecing a street crowd with loaded dice. Though he later puts on better clothes and combs his hair more fastidiously, an aura of smalltime hood lingers about him throughout the movie.

In that first scene, Johnny meets Ballin Mundson (George Macready), who turns out to own a big casino that’s a front for illicit dealings in tungsten with postwar Nazi agents. The two men bond, and Mundson hires Johnny to run his casino. By the time Mundson marries Gilda, he and Johnny have become close, and their twosome becomes an unsettled threesome. But as bad as Gilda pretends to be, it’s really she who’s manipulated by the two men, often with great cruelty. Feigned hate can’t disguise the fact that Johnny and Gilda are meant for each other, something they don’t admit until the final reel. 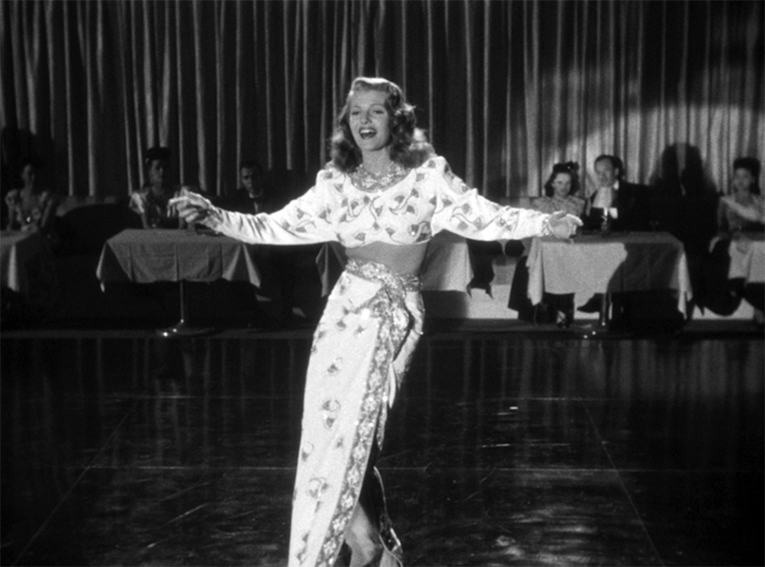 Hayworth began in Hollywood as a dancer -- Fred Astaire once said that she was the best partner he ever had. That statement is fully supported by a generous clip from You Were Never Lovelier, one of their two films together, excerpted in an episode of the TV show Hollywood and the Stars included with the extras on this disc. Because producers realized that Hayworth was sexiest when in motion, there was an effort to provide a musical number for her in every movie she made. In Gilda there are two, but the one everyone remembers is “Put the Blame on Mame,” a faux striptease that packs a wallop no matter how many times you watch it.

Gilda is full of classic film noir tropes. In one scene, Ballin is a black silhouette in the foreground on one side of the screen, while Johnny and Gilda are fully disclosed on the other side of the screen. Shadows are prominent, and Criterion’s excellent transfer has caught all of Rudolph Maté’s black-and-white cinematography with great accuracy. Definition is high, as evidenced in the pinstripe and tweed of the men’s jackets. The sound, restored from the original optical tracks, does well by the dialogue and Hugo Friedhofer’s music. All in all, it’s a mighty satisfying and appealing transfer. 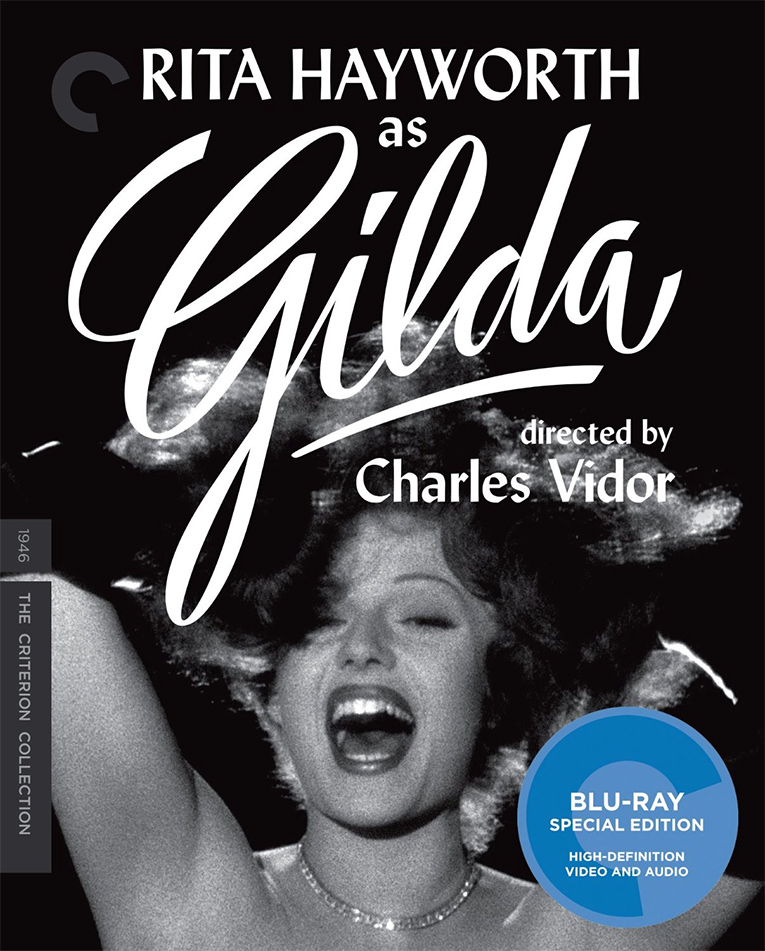 As for extras, in addition to the aforementioned television special are The Odyssey of Rita Hayworth, chronicling 25 years of her career; a new interview with film historian Eddie Muller, who dwells on the close relationship of Mundson and Farrell; and a piece in which directors Martin Scorsese and Baz Luhrmann discuss Gilda. There’s also a dry, sometimes illuminating commentary by film critic Richard Schickel, and the text of an essay by critic Sheila O’Malley. All of the historians, filmmakers, and journalists praise Gilda without ever quite nailing the character. As played by Hayworth, Gilda is something of an enigma -- you can watch this film many times and get a slightly different impression with each viewing. Criterion, with lots of help from Hayworth, has made that project easy on the eyes.

Be sure to watch for: Though Gilda’s first entrance is considered the signature shot of the film, for me it’s the first close-up in “Put the Blame on Mame,” when Hayworth turns to the camera, her hair tousled over one eye and a mischievous look in the other. Wow! That look sizzles.