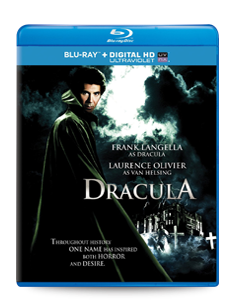 Here's another film in time for Halloween. I've been waiting eagerly for Universal to release John Badham's Dracula on Blu-ray. Though I like the camp of Bela Lugosi, the menace that Christopher Lee provides in the Hammer films, the overall Ruisdael-like look of Werner Herzog's Nosferatu the Vampyre, and the multilayered performance of Gary Oldman in Francis Ford Coppola's Bram Stoker's Dracula, it is this 1979 version that I find most satisfying overall (by coincidence, Herzog's film and this one were both released in 1979: Herzog's in January, Badham's in July).

This Badham film stars Frank Langella, who had been performing the role on Broadway for some time before filming started. The play in which he appeared was a 1924 adaptation of Bram Stoker's 1897 Gothic novel by Hamilton Deane, greatly changed by John L. Balderston in 1927. The movie is based largely on the Broadway revival of the play. Langella's Dracula was handsome, suave, and sexy. We never saw his fangs (though we did see him change into a fangy wolf and a horrible toothy bat), and his overtures to the doomed ladies in the film were as romantic as they were horrific.

Dracula is, then, in the hands of Langella and Badham, a sweeping Gothic romance and horror story. Langella is clearly the star, but the rest of the cast is excellent. Sir Laurence Olivier plays Van Helsing with intensity and a charming Dutch accent. Kate Nelligan brings mystery and determination to the role of Lucy Westenra, her father played by scene-stealer Donald Pleasence. Tony Haygarth uses a bit of humor in his portrayal of Milo Renfield, servant to Dracula and bug-and-insect eater extraordinaire.

Badham wanted to shoot the film in black-and-white, in the tradition of the early Universal monster movies, but the studio nixed the deal. It was first released to theaters in grotesquely rich color, but when the DVD was released, Badham was able to partially realize his wish by de-saturating the print so that it looked almost black-and-white with spots of color. It didn't work on the DVD, and legions of fans wrote with complaints (check out the Amazon.com listing of it and you can see just how upset many people were). The director's commentary reveals that it was more than just lessening the color. In discussing the interiors of the Seward residence adjacent to an insane asylum, Badham mentions a controlled color scheme. 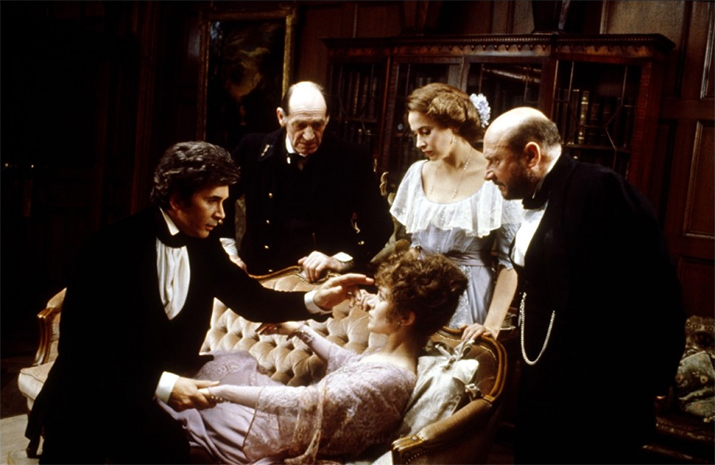 The Blu-ray, with its added detail, makes perfect sense out of it all. It's a stylized look, for sure, but an amazing one that works well for this film. It really is almost black-and-white with patches of color where appropriate. And the Blu-ray's detail lets the viewer revel in the gorgeous camera work of Gilbert Taylor. The rain in the opening storm scene practically stings, and the cobwebs, lighted by hundreds of candles, shimmer seductively during the interior shots of Dracula's "castle." Blu-ray also makes the amazing matte paintings of Albert Whitlock come to life, and it allows one to easily see Langella's eyes, which would actually vibrate when the actor became intense. Overall, this Blu-ray looks good on any set, but really shows off screens 55" or larger.

The audio is a bit curious and needs some explanation. The sound is listed as 2.0, and if you click your information button while the film is playing, you're liable to bring up "DTS-HD Master Audio 2.0." What has happened here is that rather than re-mix the audio to 5.1, Universal has chosen to go along with the original, which was Dolby Stereo. The latter was capable of carrying left and right channels, as well as matrixed center and surround channels. If you use the Dolby Pro Logic or Dolby Pro Logic IIx Cinema setting on your processor or receiver, it decodes very well into the front and rear channels. The center channel works wonders in clarifying dialogue during busy scenes, and there are good surround effects in scenes like the opening storm at sea. Throughout, the soundtrack does justice to John Williams's voluptuous score. It's one of his best, played to the hilt by the London Symphony Orchestra, though it could use a bit more bass.

There aren't many extras, but the brief production featurette has some interesting recent remarks from Langella. The director's commentary is an embarrassment, with Badham coming off as petulant and smart-alecky. After hearing it, you might think that Dracula became a great film in spite of him, not because. There's also a trailer for the Universal Classic Monsters: The Essential Collection box of Blu-rays. Universal has just released these on separate Blu-ray Discs at low cost. The trailer will give you an idea as to just how wonderfully restored these eight movies are.

I regard Dracula as an important film. Though I know many others disagree, I'll stick with that opinion as well as my belief that the color scheme really works with this Blu-ray. It adds to the great acting to raise this Dracula above the ordinary.

Be sure to watch for: As Lucy first enters Dracula's lair, she finds it lighted with hundreds of candles. There's a shot from above, through a spider's web, that shows the spider advancing on the woman's figure far below. It's an eerie yet beautiful scene that, once viewed, will stay with you. And how much crisper and better it looks on Blu-ray!