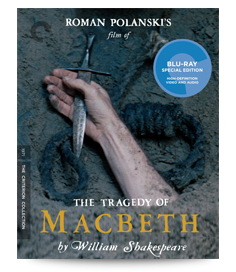 A Bloody and Entertaining Macbeth from Roman Polanski

Thespians often refer to Shakespeare's quest-for-power masterpiece as "bloody Macbeth," a name that Roman Polanski took to heart in creating his masterful, moody, and suspenseful film version in 1971. There's already plenty of blood in the stage version. Macbeth sees a "dagger of the mind" that turns bloody, and Lady Macbeth spends a portion of the last part of the play trying to wash imaginary blood off her hands. There's a lot of talk about blood here and there.

But the two bloodiest events of the play, the killing of King Duncan and the slaughter of Macduff's wife and children, occur off stage. Polanski brings them to the fore as key (and bloody) scenes in the narrative. This is one of the reasons his film works so well. It's made like a movie and not just a filmed version of the play. Shakespeare's language is not self-conscious or declaimed -- it flows, often casually, so that contemporary audiences can understand it completely. By using moody exteriors, Polanski was able to extend the implied action of the play into actual, arresting action.

He also went to great lengths to make the costumes and settings authentic. Since an Englishman authored the work, stage productions are too often happy to make the play look English. Polankski's Macbeth looks thoroughly Scottish, right down to the authentic wooden saddles that the actors found most difficult and precarious to use.

In case you don't know the story, Macbeth is a general in the service of Duncan, King of Scotland. He and his pal Banquo are riding home from a grisly combat when they encounter three witches who predict that Macbeth will be Thane of Cawdor and eventually king. On arriving home, Macbeth finds that he has indeed been made Thane. Macbeth and his wife are social climbers, so when Duncan happens to stop by with his entourage to spend the night, they see an opportunity to effect a quick cut to power by killing Duncan. Macbeth becomes reluctant, but his cunning wife pushes him on to "the sticking point" and Macbeth does the deed (on camera, made even more powerful by the fact that Duncan wakes just before the dagger goes in).

The rest of the play concerns itself with the Macbeths' growing regret and guilt, culminating in insanity and death. The motives and actions of the characters are made more believable by casting young actors in roles usually portrayed by middle-aged men and women. Jon Finch, who would star a year later in Alfred Hitchcock's Frenzy, is a youthful and confident Macbeth who grows older visually by adding a beard midway, and by letting it go scruffy near the end. Francesca Annis plays Lady Macbeth, and she's young and attractive enough to bring a sexual dimension to the role, playing her famous sleepwalking scene au naturel.

Polanski shot the movie in Todd-AO 35, a process similar to CinemaScope and Panavision. He knew how to use it well in both interiors and exteriors, and the Criterion transfer is rich and detailed. The original three-channel soundtrack has been used for the Bu-ray release, and it's also impressive in detail and sonic impact.

The extras are few but quite interesting. There's a 2014 "making of" featurette that contains interviews with Polanski and some of the cast members. Particularly impressive is Martin Shaw, who played Banquo in the film and who now, at 69, plays Inspector George Gently on Inspector George Gently, a British TV program (available here on Netflix and worth seeking out). Shaw belies his age and is a fascinating raconteur -- one of those rare guys who could talk on and on without ever boring you.

There's also a documentary from 1971: Polanski Meets Macbeth. This is very valuable in showing how Polanski works. The Polish director can be terse but also kind, as shown in his dealings with the two children who portray Macduff's massacred sons. He's pouring a bucket of stage blood (his own special mix) over them while assuring them it isn't as cold as yesterday's and generally making sure that they are comfortable. Hugh Hefner makes several appearances as well, and it's quite clear that he had no input or impact on the movie other than paying for it.

There's also an entertaining episode from The Dick Cavett Show with screenwriter Kenneth Tynan. "Two Macbeths," a thought-provoking segment from a 1972 episode of the Brit show Aquarius pairs Polanski with theater director Peter Coe, who was at the time producing Macbeth on stage with an all-black cast. The two disparate yet equally famous directors agree and disagree, and Polanski actually refuses to answer the last question in a coy and somewhat insolent dodge.

Many critics and audience members initially wrote off Polanski's Macbeth because it was Playboy magazine's first production. Watching it now, one can judge it fairly as a very imaginative and exciting movie, and one of the best films ever made from a Shakespeare play. It belongs in the company of Laurence Olivier's slightly stagier Hamlet, Henry V, and Richard III, which is not surprising since Polanski cites Olivier's Hamlet as one of his earliest and most important influences.

Be sure to watch for: In chapter 4, near the beginning, Lady Macbeth watches the procession of Duncan's entourage from the high battlements of her castle while she internalizes through voice-over the famous "unsex me here" monologue. This is a perfect example of how Polanski keeps the action going as a movie, not a play.