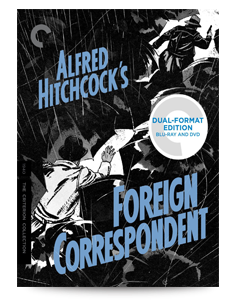 Espionage with Alfred Hitchcock in 1940

Foreign Correspondent (1940) shares honors with Rebecca (also 1940) as being one of Alfred Hitchcock's first American movies. But perhaps it's really the first because Hitchcock felt that David O. Selznick had micromanaged Rebecca in such a way that it lacked the usual Hitchcockian humor and was really apart from his oeuvre.

In retrospect, I'd have to agree. Foreign Correspondent is in no way inferior to Rebecca, and it emerges as one of Hitchcock's great chase movies. Starring Joel McCrea as John Jones and Laraine Day as Carol Fisher, with Herbert Marshall as Fisher's villainous father, the movie puts the hero into a situation that turns out to be over his pay grade, but one in which he triumphs through determination, courage, and, no doubt, a desire to impress, protect, and win over the girl.

Jones is sent to Europe by his American newspaper to be not just a foreign correspondent but an active reporter as well. He stumbles into some skullduggery perpetrated by the Nazis (who, curiously enough, are not identified as such; Hitler is referenced only twice because Hollywood wanted to protect its German interests at that point). There are three big set pieces in the film. One is an assassination perpetrated under a sea of umbrellas, the second a spooky scene set inside a Dutch windmill (actually a set built onstage), and the final is a spectacular crash of an airplane as a German battleship shoots it out of the sky.

I hadn't thought of Hitchcock as a special effects innovator, but Foreign Correspondent made me reexamine my opinion. The special effects in the airplane crash scene, fully explained in an extra feature by visual effects expert Craig Barron, were entirely new and fresh, not to mention effective. Seldom do films of the '40s present the ocean in such a menacing and effective manner, especially during the much-talked-about scene of water crashing into the cockpit as the plane and ocean meet.

Another extra on this Criterion set is "Hollywood Propaganda and World War II," an interview and montage with writer Mark Harris. This wonderful feature is chock full of poster art images for 1940s war movies and gives an excellent, brief history of Hollywood war efforts. The topic is also discussed in the comprehensive booklet essay by film scholar James Naremore. Hitchcock trailers are unconventional more often than not, and the imaginative one for Foreign Correspondent is included. There's also a radio broadcast version of the story, with Joseph Cotten taking McCrea's role.

Once again, Criterion has spared no effort in bringing a black-and-white classic back to full life. Detail is abundant and images, for the most part, are quite crisp. The optical soundtrack is greatly improved, though there's only so much one can do given the source material. I'd call it good to very good at times.

Foreign Correspondent is a thrilling film in full Hitchcockian manner. It has humor, thrills, intrigue, and some of the best special effects ever seen in 1940 -- its set pieces still hold up today. Criterion has presented the movie in a double-format edition. In addition to the Blu-ray Disc, there are two DVDs containing the same material that's on the single Blu-ray.

Be sure to watch for: One of the extras is a complete broadcast of a 1972 episode of The Dick Cavett Show that features Cavett's interview with the great director. Hitchcock displays his usual sense of humor and sets forth an idea for a murder on an automobile production line that is a gem.