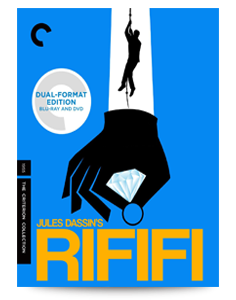 Grandfather of Heist Films Gets the TLC Criterion Treatment

The Hollywood blacklist created a paranoid time in Tinseltown when noted directors, screenplay writers, actors, and technicians could not be hired if they were suspected of having anything to do with the Communist party. Many were falsely accused and driven out of work, and some wrote under pseudonyms. Director Jules Dassin, interviewed in 2000 by Criterion in an extra included on this new release of Rififi, is still emotional about his blacklist history.

Though his name sounds French, Dassin was born in Connecticut in 1911 to a Russian Jewish family. In Hollywood he quickly became one of the top directors of the post-war, late 1940s period. During that time he directed some significant hits: Brute Force (1947), The Naked City (1948), and Thieves' Highway (1949). During the filming of Night and the City (1950), he was blacklisted and forbidden to edit or oversee the musical score for his film. Moving to France didn't help things much; two projected movies were scuttled by calls from the US threatening international retribution if he was allowed to work.

Undeterred, Dassin finally made his comeback in 1955 with the French production Rififi. And what a comeback! Rififi proved to be the grandfather of all heist films and one the most highly regarded films of French cinema. It won the Best Director award at the Cannes International Film Festival in 1956. Dassin, who went back to directing up until 1980, even satirized his own movie in 1964's Topkapi, also a highly regarded heist film.

Rififi might be loosely translated as "rough and tumble." Four men embark on a heist to rob the jewelry store Mappin & Webb, the French answer to Tiffany & Co. They rehearse and rehearse, evaluating all possible scenarios. The robbery is successful, but one of the men, César le Milanais (played by Dassin himself as Perlo Vita), betrays them to another gang, and the thieves become targets. The actual robbery, a half-hour scene without any music or dialogue, is the heart of the movie. The soundtrack carries just the sounds of the tools the robbers use. It's one of the most dramatic and tension-filled sequences in all of cinema history.

Dassin liked to film in lower-class neighborhoods so he could create realistic settings. Though this movie takes place in Paris, we're never aware of the Eiffel Tower, Arc de Triomphe, or other such touristy places, as Dassin sticks with real, everyday Paris streets and byways. The actors all wear stylized gangster clothing, with some sporting dark shirts and suits with white pinstripes, and everyone wearing fedoras. Dassin, in a way, did for Paris gangsters what Damon Runyon did for New York thugs. Dassin's characters might be crooks, but he portrays them as likeable crooks, so that viewers feel bad for them when things start going upside down in the last quarter of the film.

Criterion's video transfer is a black-and-white wonder, a symphony of shadow and light. The soundtrack is good for dialogue, but George Auric's music is often fairly distorted, which is normal for an optical soundtrack of the period. But Dassin stirs up such nonstop action that you won't even notice until called upon to give an opinion. You'll be completely caught up in the movie.

There are not as many extras as one expects with a Criterion release. There's the aforementioned video interview with Dassin, and there's an excellent booklet essay by Village Voice film reviewer J. Hoberman. Outside of this there are just some production stills, set drawings, and a sensationalist trailer that's lots of fun. There's also an English-dubbed soundtrack option that's a laugh in the wrong way.

Rififi is one of the classics of cinema, a movie that has influenced countless others. If you've never seen it, prepare to be mesmerized. If you have seen it, you'll be grateful to Criterion for presenting it with such crisp and clear images. Either way, it's a total winner.

Be sure to watch for: In chapter 3, the robbers' leader, Tony le Stéphanois (Jean Servais), comes to dispense justice to rat César. The full-screen close-ups, with beads of sweat and every whisker showing, are full of tension. These images will stick with you.