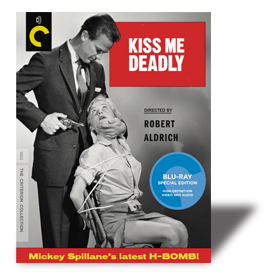 The MacGuffin in Kiss Me Deadly is a mysterious box that adds a science-fiction topping to the noir film. It contains something that glows, kills, and acts like a radioactive substance, though we're never told or shown exactly what it is. Years later director Quentin Tarantino used a similar prop, a briefcase with unseen glowing contents, in Pulp Fiction, yet he denied it was a direct tribute.

Kiss Me Deadly was based on the novel by Mickey Spillane and featured one of the author's favorite characters, hard-boiled detective Mike Hammer (Ralph Meeker). Spillane redefined the paperback book industry with his fast-moving, hard-hitting crime novels; in 1980 he had penned seven of the 15 top-selling novels. Spillane also acted in the movies, playing himself in 1955's Ring of Fear, shot at the Clyde Beatty Circus, and as Mike Hammer himself in 1963's rugged version of The Girl Hunters. He was unhappy with the many cinematic alterations made to Kiss Me Deadly, as evidenced in one of the interviews in the supplements section of this disc.

Ralph Meeker as Mike Hammer seems an ideal choice. He's an almost handsome tough guy with a little bit of softness at his core and a moral compass that's rapidly losing its bearing. The action kicks off when he runs into a woman named Christina (Cloris Leachman, making her big-screen debut) who has escaped from an asylum and some nasty villains. Hammer's encounter with Christina plunges him into a world of darkness and deceit, and after some red herrings and a few killings we finally learn that everything has been about that mysterious box.

Director Robert Aldrich and his ace photographer Ernest Laszlo used strange but effective camera angles that every viewer will find intriguing, and the movie has an almost breathless pace that grabs the audience and doesn't let go. One prop, on the wall of Hammer's apartment, will jump out at audiophiles: a reel-to-reel answering machine!

The folks at The Criterion Collection are masters at resurrecting black-and-white films, and they've done a good job on Kiss Me Deadly. There's fairly heavy grain throughout, but good focus and contrast prove that it was in the original. All the shadow and light contrasts of film noir are correctly realized, and there's good shadow definition. The monaural soundtrack sounded a lot better than I expected, even doing near justice to Frank De Vol's hard-edged score.

Possibly the best extra is a feature-length commentary by film noir specialists Alain Silver and James Ursini. They shed much light on Kiss Me Deadly and on the film noir genre. Mike Hammer's Mickey Spillane is a 1998 documentary about the controversial author, and there's a short, droll video tribute from director Alex Cox. There are a few other featurettes as well as a shortened ending not sanctioned by director Robert Aldrich that serves up an entirely different conclusion for the main characters. And though we're never told for sure what the substance in the box is, the extras disclose how the comma went missing from the title.

Be sure to watch for: Near the beginning of the movie, Hammer and Christina are captured by thugs who knock him out and start to torture her. The scene opens with just Christina's dangling legs visible, while her loud screams let us imagine the worst. Shift the scene to Hammer stretched out on a bed without a mattress and the well-defined shadows on the floor and wall. When Hammer is rolled off the bed, he falls into his shadow. Perfect noir.