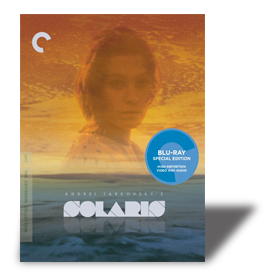 This small-scale yet epic concept movie is probably the best-known film of Russian director Andrei Tarkovsky, who is generally regarded, despite his small output, as one of Russia's greatest directors. Solaris, based on the novel by Stanislaw Lem, is nothing like the space operas we've come to regard as science fiction in the United States. There's not much action, there are no soaring spaceships, and the special effects are minimal and mundane. Instead, we get a lot of metaphysical talk about human consciousness and reality. The plot moves slowly and surely, but doesn't plod. It might prove rough going for the average movie lover, but I'd urge anyone to stick with it; most reluctant viewers will find themselves replaying it in their minds and realizing its strengths in retrospect.

The plot is very simple. Astronaut and philosopher Kris Kelvin (Donatas Banionis) is sent to a space station orbiting around Solaris, an ocean planet where the seas seem to form the brain of a conscious being, a truly sentient planet. This living entity conjures up "guests" drawn from the consciousness of the station's crew, which has been whittled down to just two members, Kelvin making it three. After being on board briefly, Kelvin sees a woman who's the spitting image of Hari, his deceased wife (Natalya Bondarchuk). He knows it's not her, and he takes her to a launch pad, puts her on a rocket, and fires her into space. But she reappears several more times until Kelvin finds that he desires to stay with her rather than return to earth, even though he knows she isn't human.

Tarkovsky liked to shoot in long takes and let his camera slowly poke around a scene, discovering for us various items that have some relevance to a character or story. When we first meet Kelvin on Earth prior to launch, we're shown reeds in a stream, and the camera slow pans, picking up a shoe and then slowly panning up Kelvin's body to reveal his face. Many directors have used this technique, but it's usually just for effect. With Tarkovsky it becomes a tool of artistic identity and recognition.

I was living in Washington, DC, about the time this film was released, and we were blessed with several theaters that showed foreign films at a reduced ticket price. We didn't see too many Russian movies, and when did, their coarse, grainy prints made for barely tolerable viewing. I guess that impression has lingered more than I expected, because Criterion's work on Solaris was nothing short of astounding to me. The picture is clean and defined, with just enough grain for comfort, and its colors often pop, perhaps in a more pastel manner than most Hollywood films, but the images have great presence. Compare the feature presentation with the deleted scenes included in the extras. Those snippets represent the impression I had of Russian film. The soundtrack isn't as good, but there's only so much you can wring out of a mono optical track without re-recording it. Eduard Artemyev's score for Solaris ranges from a simple, electronically enhanced Bach chorale prelude to full orchestra and chorus plus electronics. There's some distortion in the loud places, but the more modest ones sound good and the dialog is easy to hear. It's in Russian, but Criterion has provided very clear subtitles.

Extras include an information-packed full-length commentary with Andrei Tarkovsky scholars Vida Johnson and Graham Petrie, as well as several subtitled interviews with cast and crew. This is one of the few releases I've encountered where all the extras were in a foreign language.

Extras aside, if you give Solaris a chance, it will present you with memorable images and ideas that will last long after you've put the disc back in its case.

Be sure to watch for: To suggest a future city, chapter 8 presents a long, driver's-point-of-view journey on four-lane highways often through lighted tunnels. The definition is good enough that you feel drawn into the picture.