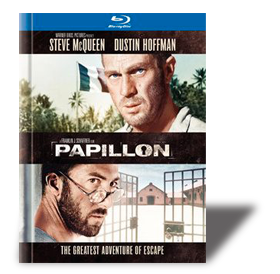 It seems perversely pertinent that Warner would release Papillon just now, when there's talk of torture and imprisonment in the air again after Osama bin Laden's death. The film is as much an indictment of the inhumane treatment of prisoners on Devil's Island off the shore of French Guiana as it is an adventure-escape tale. It's based on a book (a supposed autobiography) of the same name by Frenchman Henri Charrière, nicknamed "Papillon" because of the butterfly tattooed on his chest. Though many now doubt the veracity of Charrière's writing, one cannot deny the atrocities committed by the French officers at Devil's Island. It seems certain that Charrière tried to escape many times, but his exploits in the book are probably a summation of the adventures of many other prisoners.

The movie brings the darker elements of imprisonment at Devil's Island to the fore, and parts of it are difficult to watch because they seem all too realistic. Other than indicting the prison system of the day (Devil's Island closed in 1954), the movie provides a great star vehicle for Steve McQueen, who plays Charrière. Because McQueen died at the early age of 50, Papillon is the only chance we have to see him age beyond that half-century mark. It's all makeup of course, but it's very effective, as is his stoic performance as a man who must have freedom at any cost. Dustin Hoffman is less impressive as Louis Dega, a counterfeiter who became Papillon's friend, as he veers too close to caricature to be taken seriously.

The movie arrives on Blu-ray in one of Warner's handsome Blu-ray book editions, and the book contains around two dozen superbly reproduced still photographs of the cast and crew on slick paper that has a real quality look and feel. As for information, however, there are just a few very short essays; this is nothing like a Criterion information booklet.

The picture image is excellent once you're about 15 minutes into the movie, but the first portion is dirty and grainy and a bit soft. Hang on through that first stretch and you'll be rewarded with a superb picture that has true-to-situation colors (drab at the prison, bold and vibrant in the longing dreams of freedom) and sharp focus. The movie is a good test for a video system, since it ranges all the way from brightly lit outdoor scenes to the shadowy blackness of solitary-confinement quarters. The sound is robust and full, but except for Jerry Goldsmith's Oscar-nominated score, it exists almost exclusively in the front three channels.

Aside from the film, there are only two short extras on the disc: a production featurette and a trailer. Both are period pieces, and they're interesting for being different from today's trailers and featurettes. The short production program, for instance, has the real-life Charrière giving the audience a tour of Devil's Island. Whether or not this is rental or purchase material will depend on how much you revere McQueen or director Franklin J. Schaffner. But whichever way you go, Papillon is well worth a look.

Be sure to watch for: In chapter 16, shutters are put up over the windows in Charrière’s solitary cell. The light is gradually tuned out until only deep blackness remains. Out of that profound darkness, Charrière’s hand appears in a small shaft of light, then his face. It's an impressive scene for checking black levels.