"Smiles of a Summer Night" 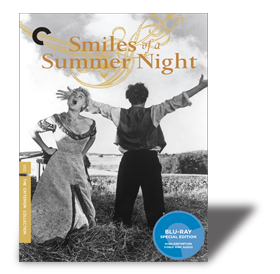 Younger readers have likely never seen this 1955 comedy classic, but their lives have probably been touched by it, for Ingmar Bergman's Smiles of a Summer Night served as the basis of Stephen Sondheim's A Little Night Music, most recently revived with Catherine Zeta-Jones and Angela Lansbury in the cast. The Broadway musical includes the song "Send in the Clowns," which dozens of singers from around the world have recorded. It seems impossible that anyone has escaped hearing it.

If Sondheim's version of the story, with most of the music in three-quarter time, is elegant, Bergman's original is exquisite, a perfectly timed and acted ensemble piece that reminds me of the intricate threads heard in a Mozart or Rossini opera, as musical themes weave in and out with absolute perfection. It's interesting to note that later in his life, Bergman filmed a stage production of Mozart's The Magic Flute, a version that both drama and music critics lauded for its ensemble performances.

Smiles of a Summer Night, set near the end of the 19th century, focuses on four pairs of mismatched lovers who intermingle during a weekend at the country estate of Mrs. Armfeldt (Naima Wifstrand), mother of the famous actress Desirée Armfeldt (Eva Dahlbeck). Her former lover, Fredrik Egerman (Gunnar Björnstrand), is there with his young trophy wife, Anne (Ulla Jacobsson), and Henrik (Björn Bjelfvenstam), his terminally romantic son from an earlier marriage. Henrik loves Anne (technically his stepmother), who, though married to Fredrik for two years, is still a virgin. There are other characters, liaisons, and trysts, with the humor largely crafted from one character's humiliation of another in order to "set things right." Though there are pratfalls and visual jokes, much of the humor comes from the rapid-fire dialogue, which is subtitled in easy-to-read English on Criterion's Blu-ray.

The Criterion Collection has done well by Bergman's movies: the Blu-rays of The Magician and The Seventh Seal display exemplary black-and-white transfers. Smiles of a Summer Night, presented in the correct aspect ratio of 1.33:1, is good for the most part, but there are some scenes that contain a little video noise and a few outdoor shots that have some flicker. Overall the contrast is sharp with clean focus for a very detailed and appealing picture. The optical soundtrack has been restored, and it sounds much better than you might expect given the age of the release.

The extras, which are a little lame for Criterion, include an interesting but brief video introduction with Bergman; a discussion, again brief, between Bergman scholar Peter Cowie and writer Jörn Donner, who was also the executive producer of Fanny and Alexander; and the original Swedish trailer, which is subtitled in English. The handsome booklet included with the disc contains an interesting essay by John Simon as well as a 1961 review by Pauline Kael.

Smiles of a Summer Night is a delightful comedy of manners on the surface, but underneath that façade it makes some enlightening and wry comments about love, fidelity, marriage, sex, and humiliation. Ingmar Bergman directed it with pitch-perfect precision, and it's so skillfully and subtly shot that you can watch it many times over before noticing every detail.

Be sure to watch for: Chapter 16 begins with a close-up of Anne standing next to a birdcage. The Blu-ray's high resolution reveals the tiniest detail and gives everything in the shot its own texture: Anne's hair, her dress, the metallic cage, the birds, and even their feeding dish have palpable presence.