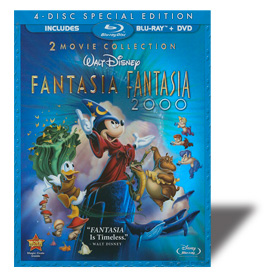 Walt Disney’s visionary masterpiece seems fresher than most current animated films and it has been given a superlative transfer for its release on Blu-ray. Moreover, the four-disc set also generously contains Fantasia 2000 and Destino, Walt’s pre- and posthumous collaboration with Salvador Dali. DVD versions are also included if you have yet to take advantage of this holiday’s rock-bottom Blu-ray Disc player prices (an LG for $65 at Walmart) to upgrade your system.

Disney intended to make Fantasia an ongoing work by adding new numbers from time to time while deleting others. The project proved too labor-intensive, even though sketches had been made for Musicana, a Fantasia-like movie. Musicana is discussed in one of the supplements in this set. It and the other extras on the discs point out that all of the scrapped work done on Disney films is put in the archives where it might resurface and prove useful at a later date.  A prime example is Destino, a project that Disney and the world-famous artist Salvador Dali worked on for some time, then abandoned. The sketches and paintings already made for it were unearthed from the Disney vaults in the early 2000s, a director assigned and the short award-winning film was made. This set contains a fascinating hour-and-a-half documentary that very thoroughly documents the Disney-Dali connection and the way the film was made after they were both deceased.

As to Fantasia, the movie is presented in its original road-show length, which means that all of the introductions by music critic Deems Taylor have been reinstated. Well, sort of. Most of them had fallen into such a bad state that the audio engineers knew that many would have to be re-recorded. To avoid a mismatch in voices, they simply had the whole track recorded again. So while you may well see Deems Taylor in HD, you are going to hear Corey Burton sounding like him. Honestly, given the dilemma of missing material, I think the choice was a wise one and that most people would not even notice the substitution unless it was pointed out. Yet this issue has caused a lot of furor with purists. Perhaps even more of a tempest in a teapot is the exclusion of a black pickaninny centaurette in the Pastoral Symphony sequence. History has named her "Sunflower" and her scenes are mostly there, it’s just that they have been panned and scanned so she is not seen. This was a good choice to my mind, as the stereotypical images, seen in an enlightened age, are disturbing and not at all in the spirit of Mt. Olympus where the Disney version of Beethoven’s classic is set. If you don’t believe me search YouTube and watch the footage for yourself.

Those two nitpicks aside, the video transfer is stunning. Colors are vibrant and bold in sequences like The Nutcracker Suite and The Sorcerer’s Apprentice, detail throughout is outstanding, perhaps best exemplified in the Night on Bald Mountain sequence where all the supernatural creatures take on new presence and concrete identity. The soundtrack has undergone extensive work and sounds much better than a 69-year-old effort should. The music was particularly impressive in the Rite of Spring section where the lower instruments growled with authority, and the timpani and bass drum strokes, if not subwoofer material, had solid impact.

Of course, good sound is not a problem at all with Fantasia 2000 where we have the Chicago Symphony Orchestra recorded in very high fidelity a mere nine years in the past. The sound in The Firebird chapter is especially awesome and there we hear a bass drum that really benefits from a good subwoofer. Overall Fantasia 2000 is not as inspired as the original, but it does have some good moments, notably a Gershwin Rhapsody in Blue inspired visually by the art of Al Hirschfeld, who was still alive when it came time to record the commentary track. There are commentary tracks all over the place on these four discs, but be sure to hear that one. Overall, there are many more extras than one might first notice. Disney loves to throw up an extras title and then display four or five subtitles when you click on it. Just keep following the arrows and branches and click when you see "more." It is irritating, though, that so many of the Fantasia extras take such a long time to load. I thought Blu-ray was grown-up enough now that these delays were a thing of the past, but apparently not.

Be sure to watch for: The Nutcracker Suite is fashioned with the boldest imaginable colors and the blues are particularly rich and deep. At the end, the vibrant oranges and yellows of fall give way to the icy-blue of winter and snowflakes swirl toward the camera. It’s a total color rush.