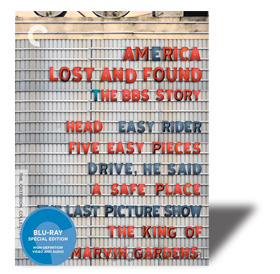 Bert Schneider, Bob Rafelson, and Steve Blauner founded and headed the production company BBS (1968‒1972). The organization made only seven movies, four of which were masterpieces. As for the other three, one was an appealing, worthwhile curiosity, and two were interesting misfires featuring A-quality acting. Their movies were counterculture to the core, and the company shook up an outdated Hollywood system by producing films that addressed current issues and appealed to young audiences.

Bob Rafelson was the main director, and there’s a tremendous array of talent, including Jeff Bridges, Ellen Burstyn, Karen Black, Ben Johnson, Timothy Bottoms, and Bruce Dern. But when you watch all of these movies back to back, you’ll see Jack Nicholson emerge as the creative force, mainly as an actor but also as a director. In one of the interview extras, Nicholson says that at no time before or after BBS has he experienced such freedom of creation in making a film. In another extra, the great French film director François Truffaut correctly identifies the films as sexually liberating (there’s nudity in almost all of them, including full-frontal male nudity in Drive, He Said).

Easy Rider, Five Easy Pieces, The King of Marvin Gardens and The Last Picture Show are the masterpieces. It’s easy for anyone to admire these productions in retrospect, especially the pitch-perfect Easy Rider and The Last Picture Show, but you had to have been there to really experience their initial impact. These films produced the same kind of shock wave that Swedish filmmaker Ingmar Bergman created a decade earlier, but the BBS movies were quintessentially American. With the inception of these films, movies no longer had to have Technicolor rainbow happy endings -- they could be just like real life. Like European movies, they could be dark and leave you guessing, in doubt, or stunned by tragedy. I remember sitting in silence at the end of the first DC run of Easy Rider, unable to move, not really sure of what I’d just seen but knowing that its impact was something new that pointed the way to something lasting.

As for the others, Head, starring the Monkees, and apparently scripted daily by Rafelson and Nicholson, is funnier now than it was then. Distance lets you make more sense of the anti-war statements brought on by US involvement in Vietnam, and it lets you enjoy the music as a pleasant dose of nostalgia. It was the Monkees being the Beatles without the same Brit class but with a lot of American insight and humor. It also made Victor Mature literally larger than life. Drive, He Said , the one film Nicholson directed, is also anti-war. It contains some first-rate performances, but it tries to cover too much ground in too short a time. A Safe Place, directed by Henry Jaglom, is the least-successful film from BBS. It’s a meandering tale of a young woman who can’t tell reality from fantasy. That young woman is beautifully acted, however, by Tuesday Weld, and Orson Welles scores points with a curious role as something of a magician in the park.

Criterion has, as usual, tried to find authentic sources in transferring these movies to Blu-ray and DVD. Cinematographer László Kovács supervised the transfer of Five Easy Pieces, Easy Rider, and The King of Marvin Gardens. Director Peter Bogdanovich supervised the transfer of The Last Picture Show, and Jack Nicholson was involved with the presentation of Drive, He Said. They all look splendid, much better than you might expect of movies around 40 years old. The sound is mostly uncompressed monaural, though there’s an optional stereo mix for Head, and a lot of work has been done to make them sound quite good. All of the people involved in bringing these movies to Blu-ray are thoroughly credited by Criterion, which also went to great lengths to obtain and produce excellent and relevant period and contemporary extras.

Seldom have so few accomplished so much on a limited budget. Easy Rider is said to have been made for $350,000, no doubt less than one episode of Sons of Anarchy costs today. Thanks to the vision and talent involved, BBS has left a strong legacy of American originals, and Criterion has made it possible to see them like new, in their entire gritty splendor.

Be sure to watch for: Though there’s a lot to see here, I’m still a sucker for the scenes of Dennis Hopper, Peter Fonda, and Jack Nicholson in Easy Rider, cruising through the majestic scenery of America on their Harleys. They look better than ever on Blu-ray.