Best of the Decade in Jazz

My first best-of-the-decade list was a defensive reaction to the frequently revived notion that jazz is dying, or worse. Those kinds of negative notions were swirling again in 2009, so I decided to look back at the recordings that had caught my ear over the previous ten years.

That list, which you can see here, included a few of improvised music’s old guard (Ornette Coleman and Cecil Taylor) but above all, it captured some recordings made by rising stars like Dave Douglas, Nels Cline, and Maria Schneider, who don’t have to take a backseat to anyone you can name who was active in the previous two decades. That top ten illustrated that jazz was alive and well, and the fact that Cline and Douglas appear again on my best of the following decade is an indication that these artists have staying power to rival the sturdiest of their predecessors. 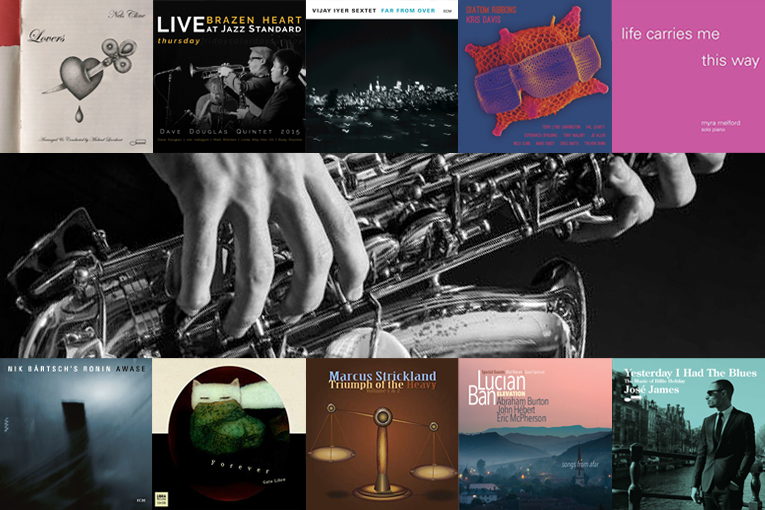 This new list also points to the ascendancy of younger musicians like Marcus Strickland and Kris Davis, who are carrying on the tradition.

It’s my hope that this prompts your own discovery of some gems that might’ve evaded your attention.

For more than 20 years, multifaceted guitarist Nels Cline put together a list of highly personal “mood music” that depicted love, lust, and loss in all their shapes and variations. Over time, compositions were added and removed from the list, but a few, like Sammy Fain’s “Secret Love” and Jimmy Giuffre’s “Cry, Want” stood the test of time. The curated collection also reached beyond the expected to include pieces like Sonic Youth’s “Snare Girl” and fellow guitarist Arto Lindsay’s “It Only Has to Happen Once.” To communicate the depth and breadth of his list, Cline assembled 22 musicians -- ranging from family members (his twin brother Alex and wife Yuka Honda) to players like cellist Erik Friedlander and bassoonist Sara Schoenbeck. The result was a brilliant, expansive set that provides an extremely deep listening experience.

Trumpeter Dave Douglas is a perennial on my year-end top-ten lists, but it’s almost always for one of his various studio projects. This 26-song/eight-set live box captures his 2015 quintet -- tenor saxophonist Jon Irabagon, pianist Matt Mitchell, bassist Linda May Han Oh, and drummer Rudy Royston -- at the very peak of its game, performing compositions from its three studio albums. It’s fascinating to hear the band work its way through its book of tunes, stretching out some nights and powering through on others. As I wrote in DownBeat: “Douglas consistently has put together bands that highlight textural complexity and distinctive voices, but this quintet stands among the very best of his many projects. Irabagon, in particular, has an exceptionally simpatico relationship with the trumpeter, and his intelligence and wit shine through on everything he plays.” It’s no exaggeration to say that this is one of the best live jazz collections ever released.

Long known for his exceptional trio, pianist Vijay Iyer’s sextet immediately caught people’s attention because it combined a great frontline -- trumpeter Graham Haynes and saxophonists Steve Lehman and Mark Shim -- with longtime rhythm section collaborators, bassist Stephan Crump and drummer Tyshawn Sorey. Several of the pieces on Far from Over make sonic references to Miles Davis’s work from the late ’60s and mid-’80s, layering electronic keyboards and horns over either floating or funk rhythm, while two others -- including a dedication to poet Amiri Baraka -- are turbulent commentaries on life in the era of Donald Trump.

If forced to choose, I would nominate pianist Kris Davis as the most impressive improvising artist of this decade. Her career began to blossom when, after living in New York since 2001 and recording eight albums, she formed a quintet with violist Mat Maneri, saxophonist Ingrid Laubrock, bassist Trevor Dunn, and drummer Tom Rainey. Increasingly, her peers in New York have recognized her highly distinctive voice and understated confidence. Released in 2019, Diatom Ribbons is the kind of album that signals a musician has reached a new level: a multilayered jewel box that includes compelling contributions by such high-profile artists as guitarists Marc Ribot and Nels Cline, vocalist Esperanza Spalding, and drummer Terri Lyne Carrington. I can’t wait to see what the next decade brings from Davis.

It’s highly ironic that Chicago-born pianist Myra Melford’s career really began to explode after she side-stepped into academia and moved to northern California. She was making fresh, distinctive music for years before that; melding her love for blues piano, her explorations of Indian music, and her extraordinary ability to improvise into music that sounds like no one else. A solo recording captured with intimacy and clarity, Life Carries Me This Way contains threads of all her influences, and illustrates the breadth of her talent.

After falling in love with successive releases by this Swiss band, I finally was able to see them live in mid-2019, and they more than lived up to how Manfred Eicher presented them on disc. Using repetitive, highly percussive cells, the quartet weaves in and out of Bärtsch’s melodies in a way that alludes to both the hypnotic work of Phillip Glass and the propulsive urban dance songs of Talking Heads. This is a recording that stayed on my personal heavy rotation list for weeks.

Here’s one I guarantee you won’t find on any other list; it slipped beneath the radar when it was released, too. Blame that on the prolificacy of Japanese keyboardist Satoko Fujii and her husband, trumpeter Natsuki Tamura, the fact that their band Gato Libre is so different than their typically brazen avant-gardism, or just poor distribution for a Japanese label. Hushed and wistful, the compositions on Forever are built on shifting ostinatos or broadly spaced single notes, and Fujii’s spectral accordion accompaniment is melancholic and haunting. If you want something to take your mind away, hunt down this recording. It’s very special.

A tremendously wide-ranging, two-disc set that melds a live trio show and a quartet studio session, this DIY project helped cement Marcus Strickland as one of the leading reed players and composers of his generation. The leader’s refusal to cleave to expectations -- mixing tempos and moods like a DJ -- kept this fresh, while the occasional nod to Sonny Rollins, John Coltrane, and Wayne Shorter reminded the listener of Strickland’s reference points.

There is an alluring timelessness to the music created by pianist Lucian Ban’s Elevation quartet on Songs from Afar -- the group’s third album for Sunnyside. Perhaps that’s the effect of mixing traditional Romanian folk songs -- two of them sung with authenticity by Gavril Tarmure -- with a band that can sound like it’s channeling John Coltrane’s quartet. It might also be the fact that the group, which expands to a sextet with the addition of Tarmure and violist Mat Maneri on one of two versions of a traditional wedding song, plays without artifice, whether they are mining Transylvanian folklore or paying tribute to Sun Ra.

José James : Yesterday I Had the Blues: The Music of Billie Holiday (Blue Note) 2015

Singer José James’s career has been all over the place in the past decade, but he’s never been better than on this exceptional 100th birthday tribute to Lady Day. Backed by a first-rate rhythm section -- Jason Moran, John Patitucci, and Eric Harland -- James avoided the usual pitfalls of anniversary tributes through effective gender reversal and the skillful blending of his husky voice with his bandmates. Perhaps the greatest triumph in this flawless recording was the way James succeeded in transcending the lyrics -- achieving that rare goal of transforming the human voice into a horn -- yet still making every word count.