This year is the 80th anniversary of Blue Note Records, the venerable jazz label established by Alfred Lion and Max Margulis in 1939. While other record companies played important roles in documenting jazz, Blue Note’s presence in the marketplace overshadows them. It’s doubtful that any other jazz label is better known, or has more recordings currently available in various formats -- the number of Blue Note titles in circulation on CD, as downloads, or on recent vinyl pressings is staggering. Blue Note is also a favorite of audiophile reissue labels, several of which have licensed albums from its catalog to release as new LPs.

Five years ago, Blue Note’s current president, Don Was, celebrated the label’s 75th anniversary by initiating a campaign of reissuing on vinyl more than 100 classic Blue Note titles. While some were fan favorites, such as Cannonball Adderley’s Somethin’ Else and John Coltrane’s Blue Train, others were welcome surprises. Most audiophile Blue Note reissues are of the same few titles, so it was nice to have Andrew Hill’s Black Fire and Don Cherry’s Complete Communion back on LP, as well as many others that hadn’t been available on vinyl for decades.

For Blue Note’s 80th, Was has more good things in store. The label is continuing its Blue Note Review subscription service with Volume Two: Spirit & Time, which includes recordings by Art Blakey and Bobby Hutcherson, as well as a tribute to drummer Tony Williams. Was is also overseeing a series of vinyl reissues that will begin in May and be grouped around different themes: Blue Note Debuts, Blue Grooves, Great Reid Miles Covers, Blue Note Live, and Blue Note Drummer Leaders. 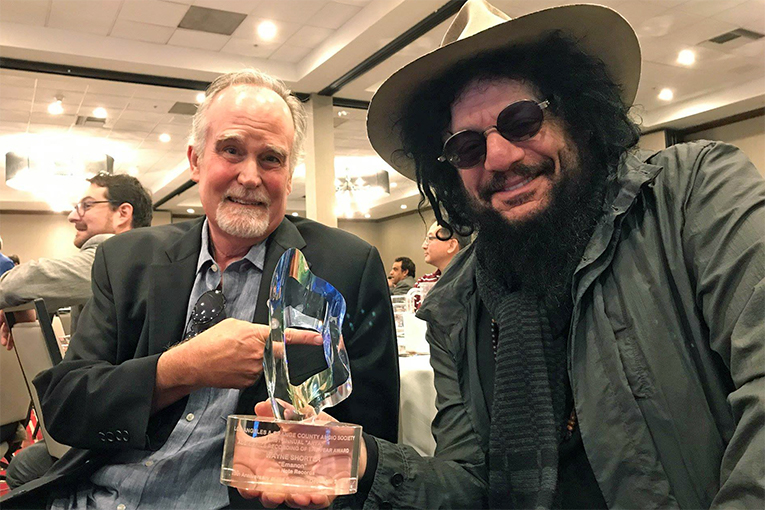 Joe Harley (left) and Don Was

Was has also commissioned Tone Poet, a series of audiophile vinyl reissues named for Joe Harley, who will oversee the remastering of the series by Kevin Gray. With Ron Rambach, Harley coproduced Music Matters Jazz’s reissues of Blue Note titles, also remastered by Gray; the Tone Poet series follows the same high standards for mastering, pressing (by RTI), and packaging.

The first album in the series is Etcetera, a 1965 recording by Wayne Shorter that wasn’t released until 1980. The second, Chick Corea’s Now He Sings, Now He Sobs, originally appeared in 1968 on Solid State Records, a label since acquired by Universal Music, which also owns Blue Note. Most of the releases in the series are from Blue Note’s archives; Gil Evans’s New Bottle, Old Wine, first released by World Pacific Records in 1958, will be reissued in this series in April.

Shorter recorded Etcetera in June 1965 with Herbie Hancock on piano, Cecil McBee on bass, and Joe Chambers on drums. It’s hard to understand why Blue Note waited until 1980 to release so strong an album, which included four distinctive compositions by Shorter and a terrific reading of Gil Evans’s “Barracudas (General Assembly).” The album was well received in 1980, and in 1995 was reissued on CD and vinyl in Blue Note’s Connoisseur series, before going out of print. 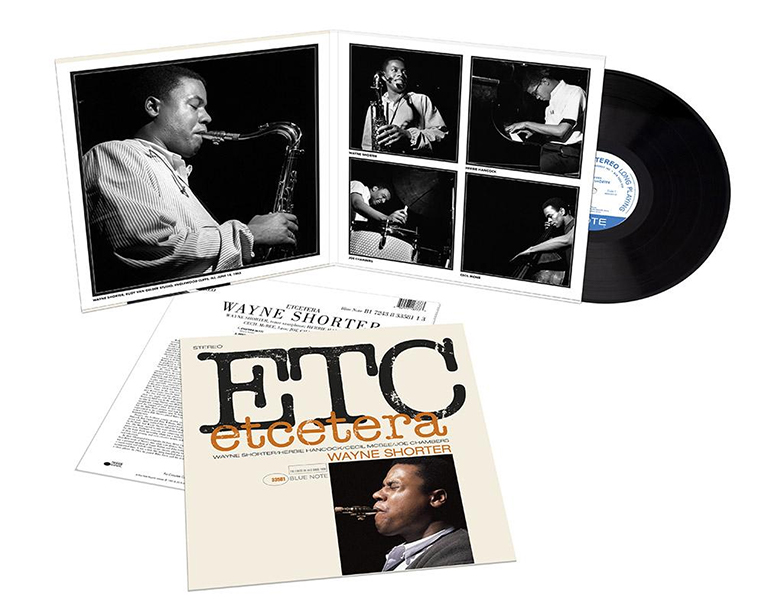 My point of comparison was the Connoisseur CD. Neither its booklet nor tray card shows a mastering credit, but my guess is that Ron McMaster did the job. The first thing I noticed was that in “Etcetera,” which begins the album, Shorter’s tenor saxophone in the Harley-Gray remastering sounds more natural and warmer in tone, with less brittle edginess than on CD. Chambers’s cymbals have more splash and sustain, and I can hear the distinctive tone of each of his drums. His ride cymbal has a more pronounced sizzle that lets it drive the music, and his hi-hat accents, nearly inaudible on CD, quickly catch my ear.

Hancock’s piano sounds richer and more harmonically layered in “Etcetera,” and in his solo I can hear how he creates drama with dynamics. McBee’s double bass, somewhat subdued on CD, asserts itself more and has a lush, wooden tone. Chambers’s cymbal taps and brushwork in Shorter’s exquisite ballad “Penelope” are more audible and immediate on the new LP, and Hancock’s piano is more resonant -- I can hear the notes emanating from inside the instrument.

McBee’s bass has a more physical, three-dimensional presence in all five tracks, and his attacks are more palpable -- Gray and Harley have presented the size and scope of the instrument more realistically. In “Toy Tune” there’s a stronger sense of the players interacting, and Chambers’s expressive drumming is more dynamic and emphatic. Shorter’s sax has tremendous force, but on the new LP its tone is less aggressive, its vibe more round and musical. Notes unfold with just as much force but with less effort. Hancock’s chords hang longer in the air, and McBee’s bass is more engaged with the rest of the instruments.

I don’t have a copy of the 1980 LP of Etcetera, or of the 1995 Blue Note Connoisseur LP simultaneously released with the CD. Original engineer Rudy Van Gelder doesn’t appear to have been involved in mastering either of those vinyl editions, so it’s hard to say whether they had the trademark Blue Note sound that his vinyl masters did. Gray and Harley have served the music on Etcetera well, however. The excitement and atmosphere of Van Gelder’s best sessions are here, and the spontaneity, the minute-by-minute interaction among the players, comes across with conviction and clarity in a way the CD doesn’t quite nail.

Etcetera is one of many Blue Note sessions not released until much later, but listening to the CD over the last 20 years has convinced me that it ranks with Wayne Shorter’s best work for the label, and this Tone Poet reissue only reinforces that opinion.

Chick Corea released two albums as a leader in 1968. One of them was Tones for Joan’s Bones, a quintet session he’d recorded two years before for Vortex Records, a subsidiary of Atlantic, which released it in April, soon after Corea had completed a trio recording for producer Sonny Lester, then head of Solid State Records. Drummer Roy Haynes and bassist Miroslav Vitous were the other players for that session, Now He Sings, Now He Sobs, which deftly mixed free jazz and bop. The album is at once accessible and challenging, and an indication of how important and innovative Corea would become.

I compared the new Tone Poet edition with a first pressing of the LP, whose matrix groove is stamped “SS18039A 1/Bell Sound.” Corea’s opening notes and chord splashes in the intro to “Steps -- What Was,” are more structurally complex on the new pressing, in a way that lets the low notes have greater impact; Haynes’s taps on the wooden body of one of his drums ring so solidly I can hear them echo inside the drum; and Vitous’s soft entrance in the right channel is more audible. 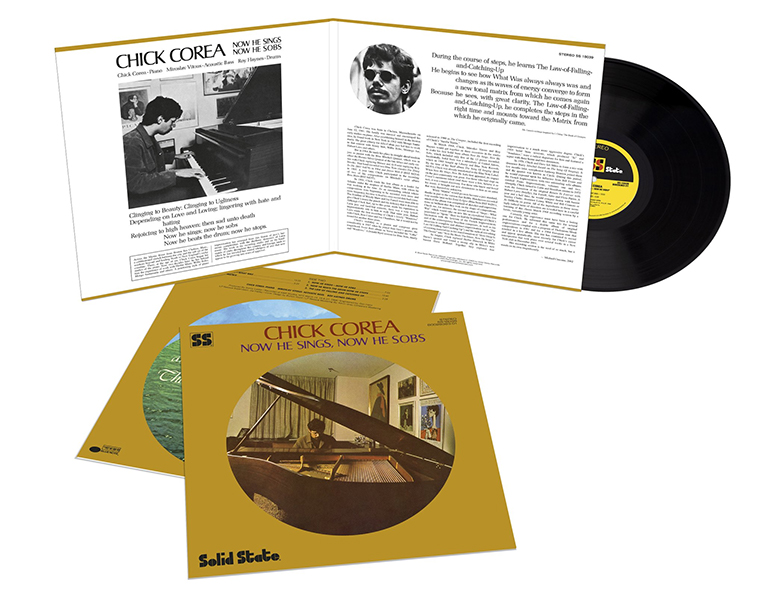 The reissue really shines when things begin to move and the three musicians interact. Haynes’s drive cymbal is a hair too bright and forward in the older pressing, and his snare accents are mixed too hot -- they hit with too much force. Gray and Harley have pulled them back, and revealed in them subtlety and color that give Vitous’s bass more room. It has more drive and definition on the new pressing; on the first pressing, he peeks through occasionally but often has to fight to get through. The high notes of Corea’s piano are too bright on the original vinyl; they sound more tonally accurate on the new, which also lets the low notes make their mark.

I can much more easily visualize Haynes’s drums on the soundstage during his solo in “Steps -- What Was,” and the low drums make a stronger impression, especially the kick drum, which moves less air on the original pressing. Haynes introduces other percussion that’s actually somewhat louder in the early LP, but now more logically locks in with the rest of the solo because Gray and Harley’s clearer mastering reveals more of the drummer’s dynamics. When he drops in volume at the end of the solo, it’s much more dramatic.

“Matrix” hints at some of the Spanish influence that would show up in later Corea recordings, and the original pressing captures the performance’s pace and exhilaration. But Gray and Harley have given the instruments more space, and again, Haynes’s drums sound more subtle and natural, which in turn lets Corea’s piano sound out more fully. Vitous sounds good on both pressings, but his low notes now rumble more impressively. Corea’s emphatic left-hand chords strike with more force because the new master allows room for louder passages to hit their mark.

The flurries of notes from Corea that begin the title track are firmly but unobtrusively supported by Haynes and Vitous on the new pressing. On the original LP there’s too much treble on Haynes’s snare, and it intrudes on Corea’s piano. Vitous’s bass now has a more natural fullness, and interacts more fluidly with Corea’s unfolding musical ideas. Vitous’s solos throughout the album have greater impact and a bigger, more impressive, more wooden sound. About two minutes in, there’s an odd dropout in the left channel not present on the original pressing. It lasts a few seconds, but the liner note says nothing about it. It was the only such anomaly on the new pressing.

All instruments sound richer on the new pressing -- Gray and Harley’s remastering presents them with more nuance and realism. It’s easier now to hear Corea’s changes in volume and force in his long, unaccompanied introduction to “Now He Beats the Drum, Now He Stops.” I could better sense with how much pressure he struck the keys to create emotional force. Higher-register notes tend to smear and decay on the original pressing, and left-hand chords often sound thin. The Tone Poet pressing lets me hear the piano’s full range. As in the other tracks, Haynes and Vitous, when they enter, sound more supportive and realistic. There’s a stronger feeling of three men coming together to create music. 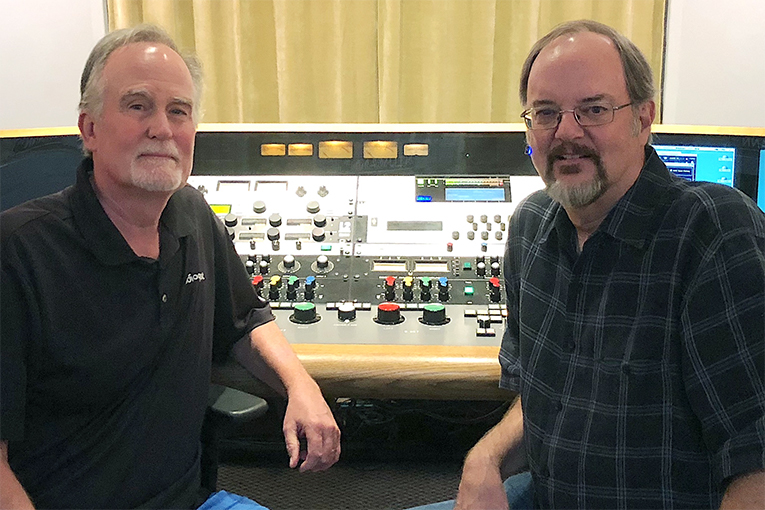 The new pressing paints a better picture of Corea’s manipulation of the piano in “The Law of Falling and Catching Up,” the free improvisation that ends the album. Percussive taps on the instrument’s case, strumming the open strings, and other effects make a stronger impression. As the other players join him, all three react to each moment, building the music and allowing inspiration to flow -- the overall effect is much more bracing and enjoyable on the new pressing.

These reissues match the Music Matters Jazz Blue Notes in the quality of pressing and album covers. My copy of Etcetera was slightly dished, though that didn’t affect the sound; otherwise, the RTI pressings were quiet and flat. The covers are heavyweight cardboard, with tipped-on artwork printed on high-gloss stock. Now He Sings, Now He Sobs reproduces the original gatefold, but with new notes by Michael Cuscuna, who produced the 1988 CD reissue for Blue Note. The gatefold of Etcetera boasts terrific photos from the recording session.

Blue Note will release a total of 18 Tone Poet LPs, including albums by Grant Green, Lee Morgan, and Lou Donaldson, and the 80th-anniversary series will include nearly 40 additional titles on vinyl. I’ll be eager to see who does the mastering and pressing. Even ten years ago, who could have guessed that, in 2019, new vinyl would be so healthy?