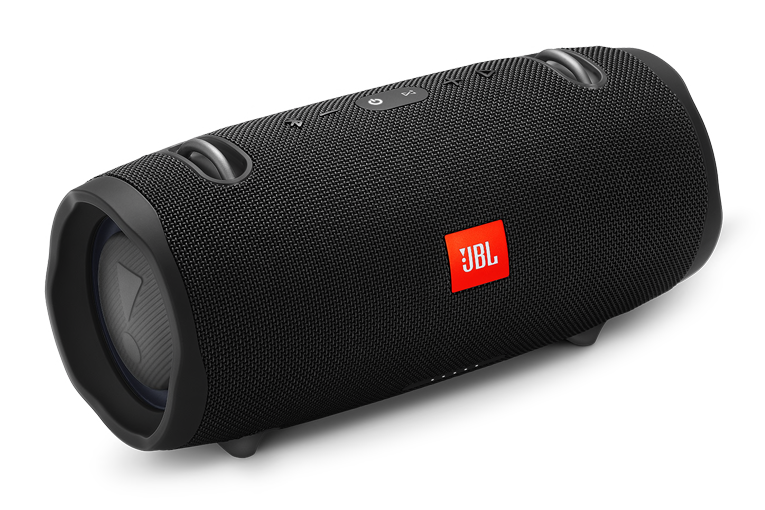 The Xtreme 2 comes in a largish box, its front emblazoned with a nearly life-size image of the speaker and the proclamation “unleash powerful sound everywhere!” One end of the box exhorts us to “dare to listen!” More thoughtfully, the box has a carrying handle.

Inside the box are the JBL Xtreme 2 itself, a power adapter, a carrying strap, a quick-start guide, a safety sheet, and a warranty card (one year, limited), but no USB charging cord -- the Xtreme 2 is charged from AC with the power adapter.

The roughly cylindrical Xtreme 2 measures 11.3”W x 5.2”H x 5.4”D and is made of rock-solid rubberized plastic. Seldom have I hefted a portable speaker that felt so substantial. Feet molded into its bottom allow it to sit stably upright, and there are molded loops on top for attaching the sturdy shoulder strap. On the front is a white-on-red JBL logo, and on the back a waterproof compartment for the power-cord port, a 3.5mm audio jack for hooking up other devices, and a Micro-USB jack for installing downloaded firmware updates. Needless to say, it’s crucial that this compartment be tightly closed and sealed when using the Xtreme 2 in wet conditions. Used in Bluetooth mode, its waterproof rating is IPX7. 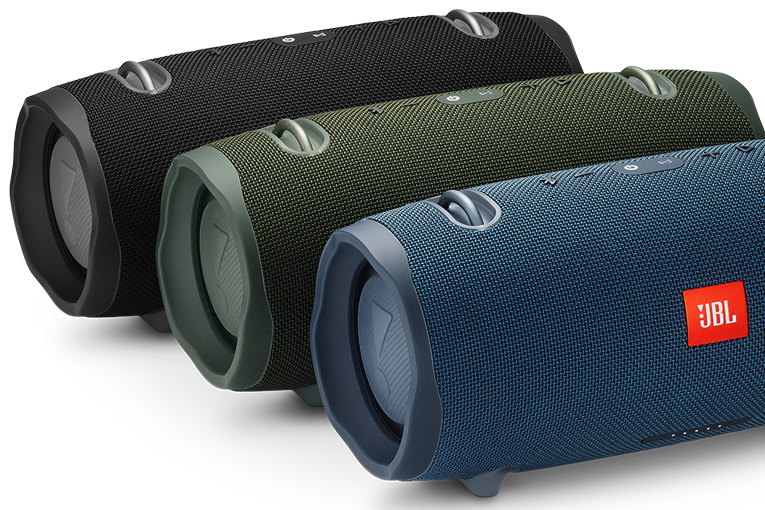 Along the top of the cylinder are pushbuttons for power on/off, Bluetooth pairing, volume up/down, and play/pause/phone calls. And next to the power switch is another button that allows you, when using JBL’s Connect+ app, to mate the Xtreme 2 with more than 100 other Connect+-enabled speakers. More important, perhaps, the Connect+ button lets you pair two Xtreme 2s for true stereo operation. Unfortunately, the Xtreme 2 can be paired only with other Connect+ devices, not with devices running the older Connect app. Thus, you can’t pair an Xtreme 2 with an older Xtreme. JBL is reportedly working on a fix for this. Along the cylinder’s bottom runs a strip of five blue LEDs that reveal the status of the battery charge.

The Xtreme 2 has two 0.8” (20mm) tweeters and two 2.75” (70mm) midrange-woofers, one of the latter at each end. The midrange-woofers are exposed, and while it’s fun to watch them bounce in and out, they’re quite vulnerable. Take care to keep your Xtreme 2 away from sharp objects and the pokings of young fingers. 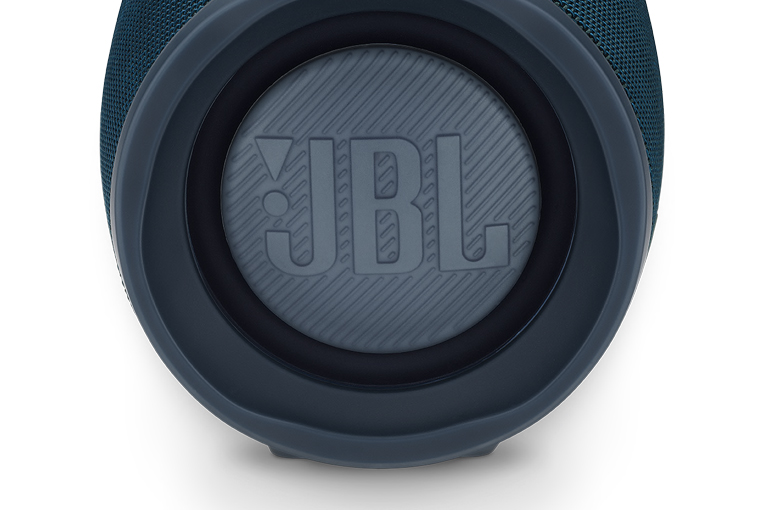 JBL specifies the Xtreme 2’s power output as 20Wx2 RMS, its frequency range as 55Hz-20kHz, its signal/noise ratio as >80dB, and its Bluetooth version as v.4.2. For the lithium-ion polymer battery JBL claims a full charge time of 3.5 hours and a playing time of 15 hours, the latter of course dependent on the playback volume. The Xtreme 2 comes in Midnight Black, Ocean Blue, or Forrest Green.

The Xtreme 2 is big for a portable Bluetooth speaker. Most people will be unable to easily pick it up in one hand -- it’s best to attach the carrying strap, otherwise you’ll likely have to use both hands. It sat stably on its two feet even when playing very loud, bass-heavy music. Its range of Bluetooth operation was about 24’ in my cluttered home, about 35’ outdoors.

Bluetooth pairing was easy. Oddly enough, though JBL’s Clip 3 had refused to pair with my Benjie Rocker music player, the Xtreme 2 did so instantly. After the first pairing, I never had to pair it again -- all was automatic. 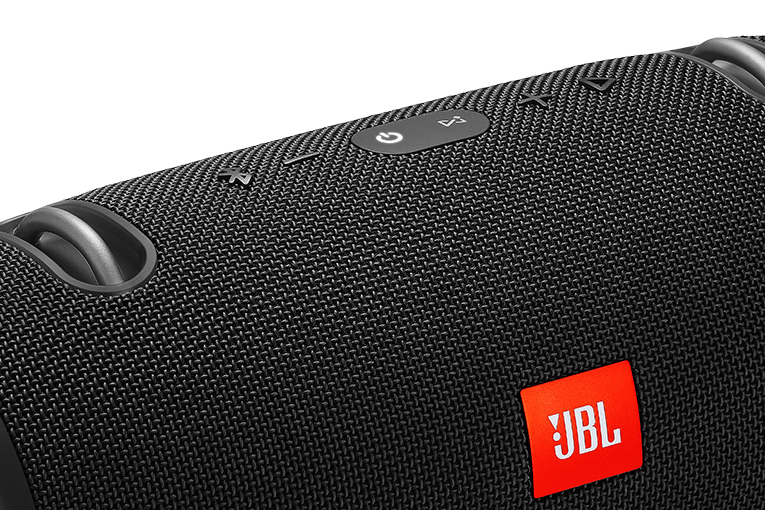 The controls all worked well. Only the power button has its own LED -- although its blinking in standby mode drove me to mild distraction, the other buttons’ lack of lighting makes them hard to see. I eventually learned their positions by touch -- it wasn’t difficult.

In addition to Connect+, JBL provides an app for adjusting the Xtreme 2’s equalization -- but I found the factory settings quite satisfactory.

The JBL Xtreme 2 could play loud, if perhaps not quite loud enough for a raucous party or a pool gathering. Nonetheless, its sound filled my medium-size room quite well, and it’s certainly loud enough for a tailgate party. Its sound was evenly balanced from top to bottom, and its bass was more solid and focused than you might think a portable wireless speaker could manage. Its warm midrange was good for singer-centered music, and its highs were pungent and clear. My only complaint about the sound was that the highs could be a bit harsh at maximum volume. I found it best to turn the volume all the way up, then reduce it a click or two. Using the wired connection produced sound that was slightly more focused, with wider dynamic range, but the wireless sound was so good that it might get you to reconsider Bluetooth, if you’ve dismissed it so far. It’s come a long way. 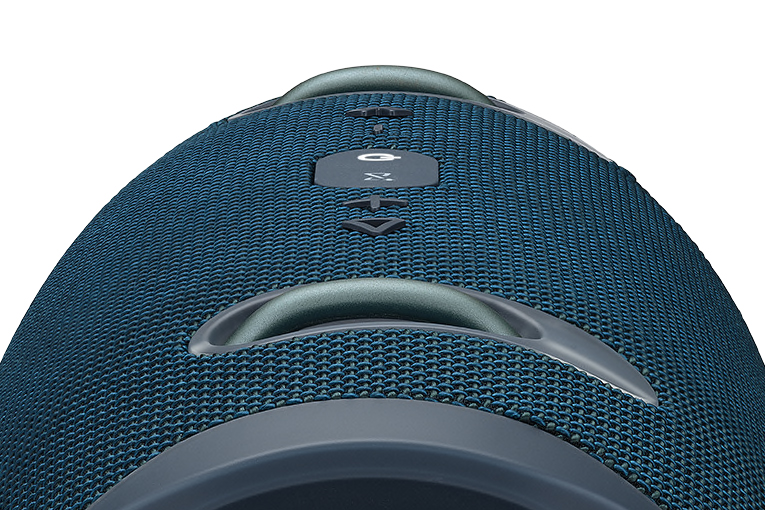 I was happy to have my little Benjie Rocker player back in commission -- it’s my main portable storage device for high-quality recordings (600 and counting, all in CD or higher resolution). As I evaluate new Bluetooth speakers, I’m using it to rediscover a lot of albums, one of which was Frank Sinatra’s A Man and His Music (16-bit/44.1kHz ALAC, Reprise), originally a two-LP set released in 1965. Most of the tracks were culled from Sinatra’s Reprise albums recorded three or four years earlier, but three songs, and Sinatra’s narration, were new. The album runs the gamut of arrangements and vocal styles: lush strings in “Night and Day,” blazing brass in “Come Fly with Me,” pungent percussion in the faster tracks -- and double basses, plucked or bowed, were rock solid through the JBL. Throughout, there was the one consistent element of Sinatra’s glorious voice, heard through the Xtreme 2 with every intake of breath and perfectly enunciated attack faithfully reproduced.

Because the Xtreme 2 seems perfect for tailgate parties, it made sense to try out some country or hillbilly music. I picked “Little Sister,” my favorite song from Dwight Yoakam’s Hillbilly Deluxe, a No.1 album on Billboard’s Country & Western chart in 1987 (16/44.1 ALAC, Reprise). Yoakam’s edgy, somewhat nasal voice was front and center, supported by buzzing electric guitar, thumping electric bass, and tense percussion. This track played loud enough through the Xtreme 2 to bother other tailgaters four or five cars down. But except at max volume it sounded oh, so clean -- about as close to high fidelity as I’ve heard from a portable speaker. 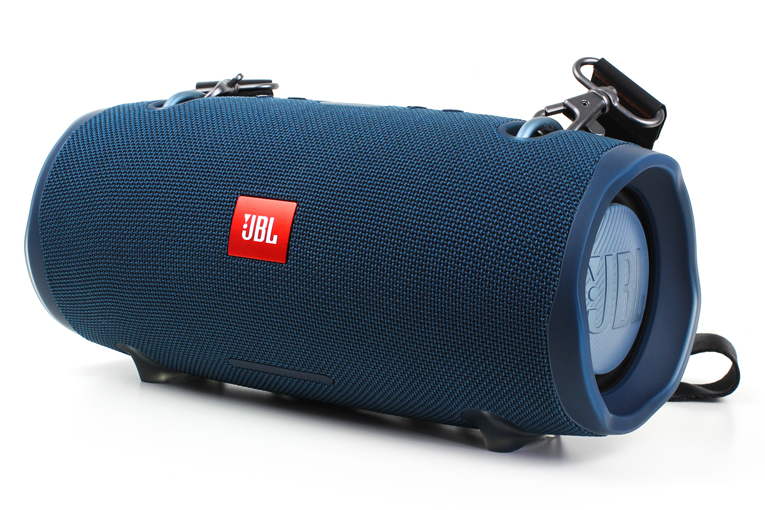 Classical music fared well, though here I often wished I had a second Xtreme 2 to listen in stereo -- the sound was mainly confined to the speaker. Bruno Walter’s dramatic reading of the final movement of Brahms’s Symphony No.4 (16/44.1 ALAC, Sony Classical) was very appealing, with near peerless brass for a Bluetooth speaker: the sounds of the brasses ranged from solid to sweet, perfectly balanced by sonorous strings and sweet woodwinds. Add the boisterous, sharply focused timpani, and I had one glorious sound.

The JBL Xtreme 2 is a heck of a good portable Bluetooth speaker. It sounded good with all types of music, and its battery lasts a long time on a short recharge. Charge it overnight and play it all day -- you’re unlikely to ever run out of juice. Its nifty Connect+ app lets you sculpt your listening experience to your tastes, and the durable shoulder strap makes it easy to carry around -- just be careful not to puncture the bass drivers. The price might seem high, but the Xtreme 2 is built to last, and you can find deals here and there. With the Clip 3, JBL has been equally successful in creating a portable David and a portable Goliath.