Some companies like to come up with all-new models every year; others continue to refine and upgrade successful basic designs. JBL, one of the latter, released the original Clip Bluetooth speaker in 2015. In 2016 came the Clip 2, which added waterproofing, and now we have the Clip 3, with a sturdier build, longer playing time on a full battery charge, and a rainbow of colors to choose from. JBL has eliminated a feature that some buyers might miss, but at $59.95 USD, the Clip 3 is still a legitimate choice in a very small Bluetooth speaker. 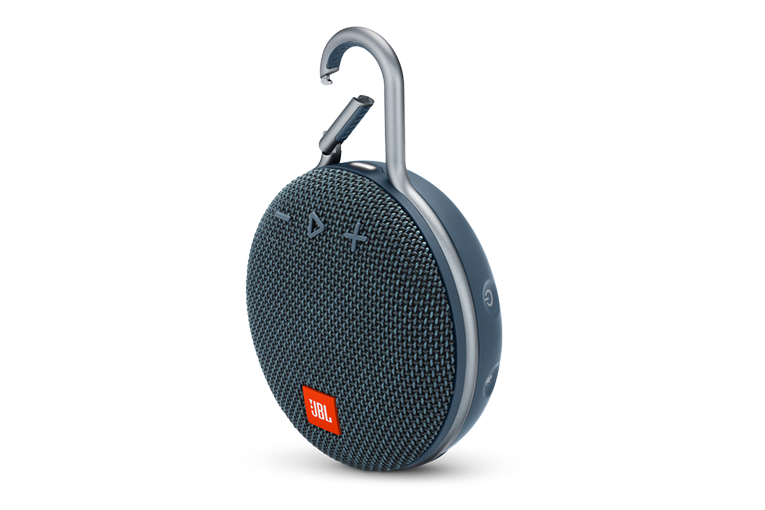 The Clip 3 is sold in a compact box with a large plastic window. That window is more important than usual -- the Clip 3 comes in so many colors that you’ll want to be sure to get the one that’s right for you: Midnight Black, Ocean Blue, Forest Green, Stone Grey, Dusty Pink, Steel White, Fiesta Red, Desert Sand, Squad, River Teal, Mustard Yellow. Also in the box are a USB-to-Micro-USB charging cord in JBL’s signature orange red, a quick-start guide, and warranty information. The Clip 3 has a 3.5mm jack, but no audio cord is provided.

The Clip has always been made of hard rubber and plastic, but in the Clip 3 the metal clip goes all the way around the speaker’s disc-like case, and terminates in a carabiner, giving the case greater protection and structural strength. The Clip 3’s build quality is solid as a brick -- I wouldn’t worry about dropping it.

At the bottom of the Clip 3 is a tab, labeled “Clip 3,” that can be opened with a fingernail to reveal the Micro-USB and 3.5mm audio jacks. The speaker has a waterproof rating of IPX7, but to take advantage of that you must make sure that this tab is securely closed. At 3 o’clock on the Clip 3’s rim are two buttons, for power on/off and Bluetooth pairing. On the front of the speaker, at 12 o’clock, are three more buttons: volume up (+), volume down (–), and play/pause. Tap play/pause twice to skip forward a track; this button also lets you receive phone calls, assuming your phone is set up to use that feature. 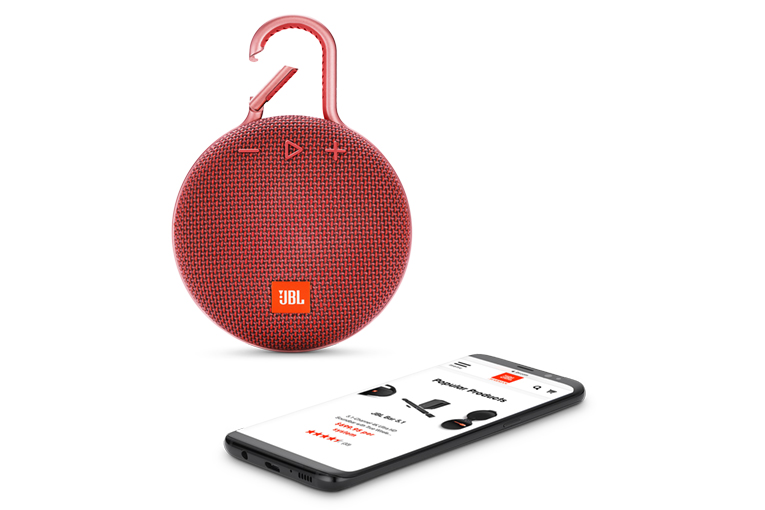 The back of the Clip 3 is where the biggest differences from prior models are most obvious. Instead of the Clip’s and Clip 2’s hardwired 3.5mm cord and a groove to fit the cord into when not in use, the Clip 3 has a jack for a detachable cord; taking up most of the rear panel is a heavily rubberized disc embossed with a big exclamation mark. This prevents the Clip 3 from bouncing around when played at high volume levels.

The Clip 3 easily paired with my Apple devices, but I couldn’t get it to pair with my Benjie Rocker music player. With the Apples, it was just a matter of pushing the JBL’s pairing button; after a few seconds of electronic announcement noise, the Clip 3’s blue pairing LED begins to blink. Find the Clip 3 on your Bluetooth device’s menu and click OK. The Clip 3’s range of Bluetooth operation in my somewhat cluttered house was about 21’, and more when I tried it outdoors.

The Clip 3 seems durable, and should survive any normal use -- I took it into the shower with me and was able to enjoy music without fear of water damaging it. I wouldn’t throw it at a wall or drown it in a swimming pool, but if the latter happens, it should survive. All controls worked correctly. 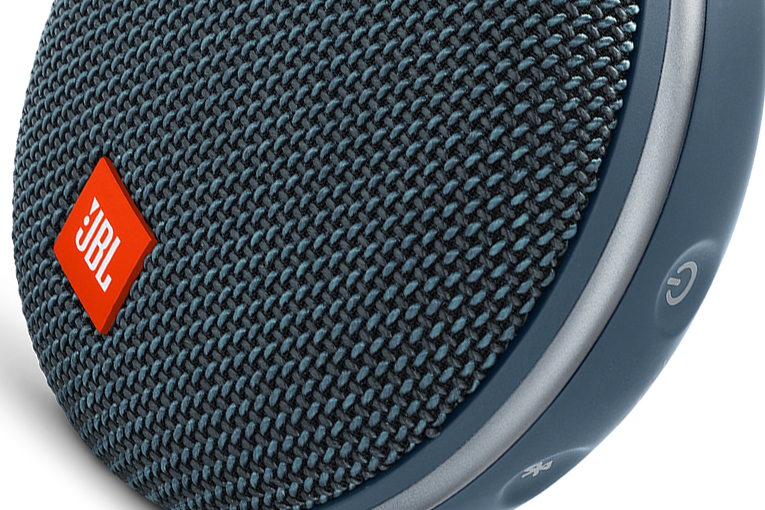 The one big disadvantage of the Clip 3 in comparison with the Clip and Clip 2 is that multiple units of both earlier models could be daisy-chained for a bigger sound. Can’t do that with the Clip 3. If that’s a biggie for you, don’t despair -- the Clip 2 is still available at a reduced rate ($42.95 from Amazon). But the Clip 3 is more solidly built, and offers more playing time on a battery charge -- and it sounds better.

The Clip 3 didn’t always suit my own uses. JBL’s ads largely show the speaker clipped to backpacks, but it can be clipped to a belt or belt loop or just about anything -- that big clip’s aperture is 1” wide. I preferred to lay it on its back, trusting that thick rubber cushion to keep it in place. (It did.) I also found out that the Clip 3 sounded marginally fuller that way -- sound bounced off the surface I’d placed it on, reinforcing the bass in particular.

Overall, the Clip 3’s sound quality was much better than you might expect. It didn’t reproduce much midbass, and no lower bass, but it reproduced the upper bass and lower midrange fairly well. The midrange was surprisingly clear -- voices sounded better through the Clip 3 than through many more expensive Bluetooth speakers I’ve heard. And the highs, too, were clear -- solid and crisp, with no audible distortion even at loud levels. It could also play very loudly without ill effects. I can imagine it working perfectly as an impromptu party speaker, including pool parties -- remember, it’s waterproof. But if you want more volume than a single little Clip 3 can provide, you might want to look into the Clip 2 or just get a bigger Bluetooth speaker.

To get the impossible out of the way: “Moanin’,” from Karrin Allyson’s In Blue (16-bit/44.1kHz ALAC, Concord Jazz), begins with an amazing double-bass solo by Peter Washington. Much of that solo takes place below 120Hz, so I had to imagine most of it -- from the Clip 3 I heard only the occasional overtone. But unless you’re a huge fan of jazz bass solos, you’ll be more than OK with the Clip 3’s low end -- there’s usually enough upper bass and rhythm to suggest a bass line, even if it won’t actually be there. 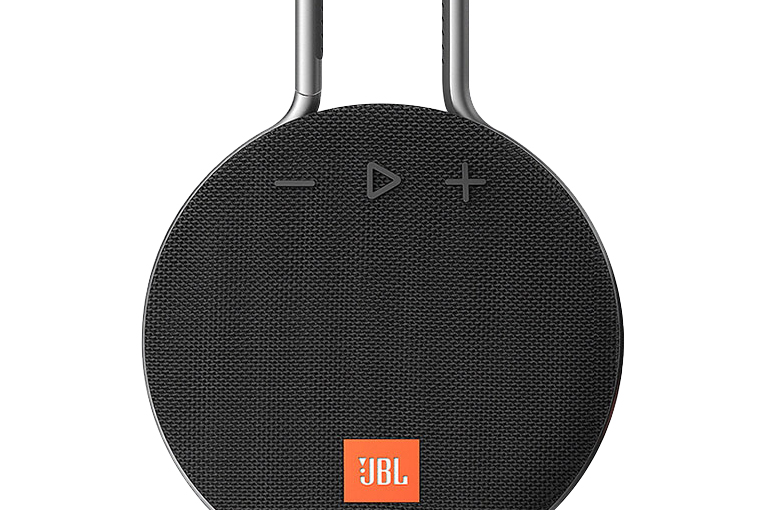 J.S. Bach’s Brandenburg Concerto No.1, performed by Concerto Köln (16/44.1 ALAC, Berlin Classics), came through the Clip 3 very well, everything bubbling along spiritedly, especially the raucous horns and pungent bassoon. Other classical music for small ensemble was equally listenable. Large-scale orchestral works such as Brahms’s Piano Concerto No.2, with pianist Emil Gilels, and Eugen Jochum conducting the Berlin Philharmonic (16/44.1 ALAC, Deutsche Grammophon), also sounded very good. I had to use my imagination to reconstruct the very lowest piano notes, but the middle was firmly laid out in a very pleasing way. The orchestra sounded excellent, the violas and cellos having a very warm sound and solid images, the violins sounding airy and sweet.

Listening to the Brahms through the Clip 3 led me to believe that the JBL might be very good with solo piano and solo guitar albums. If you’re hiking, recordings of this sort might make a very nice background to a picnic by a babbling brook.

Regardless, the Clip 3 will probably mostly be used for rock, jazz, and acoustic folk. “Hungry Like the Wolf,” from Duran Duran’s Decade (16/44.1 ALAC, Capitol), made a strong impression, with solid drum licks and searing guitars driving it on. Most Beatles albums sounded crisp and solid, as did many other albums without low bass. 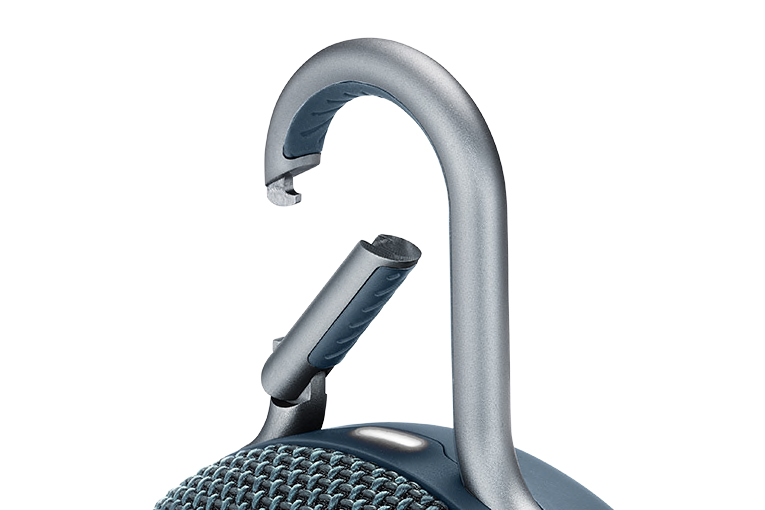 Jazz worked very well with the Clip 3. “I.G.Y.,” from Donald Fagen’s The Nightfly (16/44.1 ALAC, Warner Bros.), moved along very well, Fagen’s voice and the backing vocals sounding particularly fresh and alive. I’ve probably heard this album more than 20 times from various formats, but found I wasn’t missing that much with the Clip 3, even if my brain tells me that the JBL simply couldn’t have been reproducing all of the music.

This new version of JBL’s tiny Bluetooth speaker continues the excellence established by its predecessors. It’s inexpensive, extremely portable, has a reasonably long battery life, is available in an imaginative variety of 11 colors, and it’s not only waterproof but practically indestructible. To my mind, nothing in its price range can touch it. It can’t be daisy-chained to other Clips, but if that’s something you need, the Clip 2 is still available for $42.95.

Try this little speaker that could. Don’t expect too much, and prepare to be amazed.