When designing a new model of loudspeaker, manufacturers can go with something totally innovative and different from anything they’ve done before, or with a “family” concept: a speaker of the same design as before, but of a different size, or with different refinements or features. JBL’s Flip 4 is of the second type. The Flip line of Bluetooth speakers has been very successful, and the latest addition, the Flip 4, fits right in with the family, as well as did the JBL Charge 3 ($149.95 USD), which I reviewed in March. The Flip 4 ($89.95 USD) is about two-thirds the size of the Charge 3, has the same cylindrical design and plays loud, and, also like the Charge 3, is not merely water-resistant but entirely waterproof. 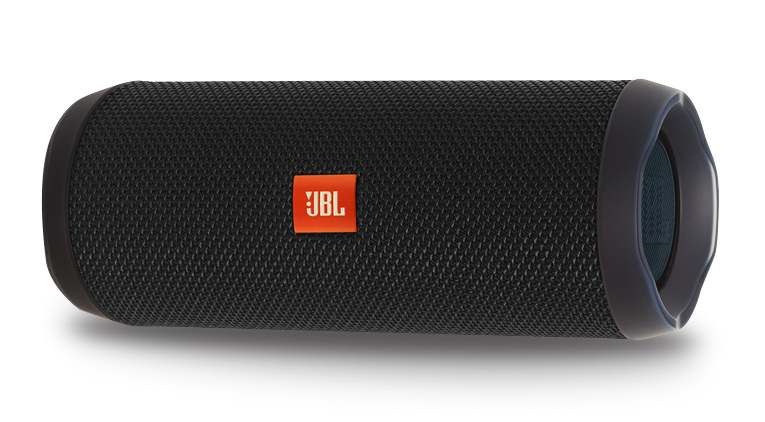 On the Flip 4’s box are drawings of the speaker, a cloth tab that makes it easy to open, and, printed on one end, the speaker’s serial number. This saves having to look it up on the speaker itself, where I found the number too small to read without a magnifying glass.

The Flip 4 has the same solid-feeling build as the rest of the Flip family. It’s 6.75” long, has a diameter of 2.5”, and weighs 18 ounces. Inside are two 40mm drivers driven by one 8W amp each, with one passive radiator at each end, covered with a disc of hard plastic the same color as the body -- one disc is emblazoned with “JBL,” the other with a “!” These discs give the radiators a small degree of protection and are an improvement over the Charge 3, but I’d like to see them protected even more.

Speaking of color, the Flip 4 is available in black, blue, gray, red, teal, or white, with an attached lanyard in the same color. The only accessory is the substantial USB-to-Micro-USB charging cord, in JBL’s signature red-orange. There are also quick-start and safety guides, a one-year limited warranty, and that’s it -- no 3.5mm audio cable is included, though the Flip 4 does have a 3.5mm jack for use with non-Bluetooth devices. 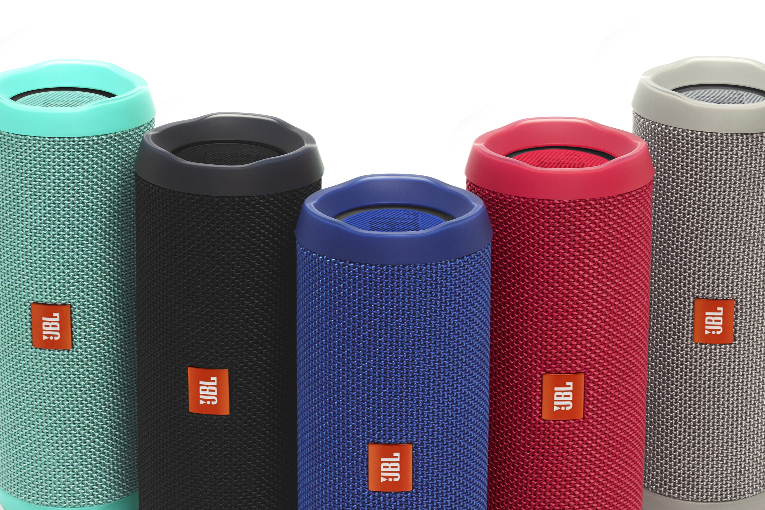 Like its kin, the Flip 4 has a wraparound grille integrated with a wrap of rubberized material that spreads out to 1.5” wide to make a base that keeps the speaker from moving around when its passive radiators pump out bass. Integrated into this base are buttons for on/off and JBL Connect+, and a waterproof port that safely contains the Micro-USB jack and the 3.5mm audio jack. Five tiny LEDs next to the power button give a rough idea of the battery’s charge status. At the center of the grille, mid-length, is the JBL logo in bright white on red-orange. Next to the base are buttons for play/pause, volume up/down, and Bluetooth pairing. There are no buttons for skipping tracks -- you use your Bluetooth device for that.

To activate JBL Connect+, you must download JBL’s free app to your Bluetooth device. Then you can choose to have true stereo from two Flip 4s, or daisy-chained mono among more than a hundred JBL Connect+-enabled speakers, for really loud listening (though I wonder where you’d find enough AC outlets to charge them with). 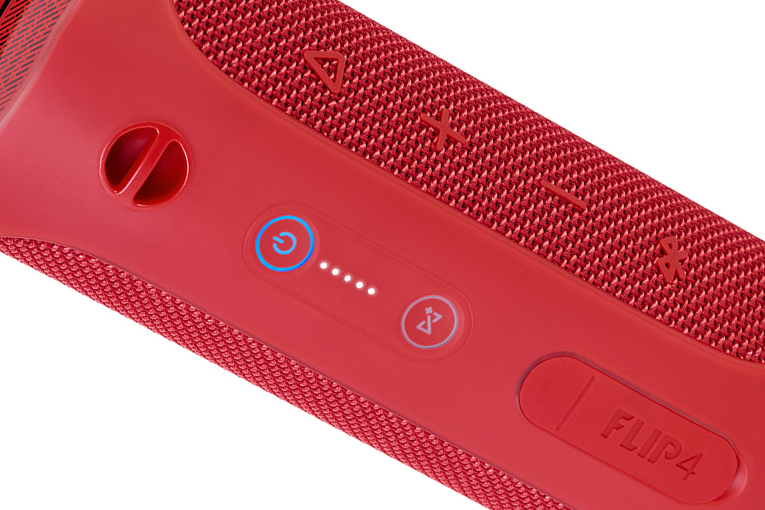 JBL says that a full, 3.5-hour charging of the lithium-ion polymer battery (3.7V, 3000mAh) should be good for 12 hours of music, which I found to be accurate. The Flip 4’s frequency response is specified as 70Hz-20kHz, its waterproofing as IPX7.

The Flip 4 was easy to pair with my portable music devices -- even the Astell&Kern AK Jr player, which has proven difficult with other Bluetooth speakers, only took ten seconds to pair. Once paired, the Flip 4 was a lot of fun. It doesn’t need a carrying handle -- it fit firmly and comfortably in my normal grip -- and its radius of wireless operation was about 21’ inside, and 31’ outside with no obstructions in the way. (A house’s interior walls always shrink the reception radius of Bluetooth speakers.)

All of the Flip 4’s buttons worked correctly, and the LEDs let me know how much battery charge was left. The rubberized base kept the speaker absolutely still, even when the bass radiators were pumping out heavy rock for dear life. For a really solid footing, however, the lanyard needs to be removed.

The Flip 4’s cylindrical design and driver positioning mean that it’s more or less omnidirectional -- walk around it in a circle and the sound doesn’t change. It played as loudly as the Charge 3, but unlike that speaker, it could distort at the highest volume settings. I found it best to turn the volume all the way up, then back it off four clicks -- then it played plenty loud without distortion.

The overall sound was very balanced from top to bottom. Sure, there wasn’t any low bass, but there were upper bass and some midbass, smoothly transitioning into the midrange and then into the treble. Depending on the recording played, the Flip 4 could sound ever so slightly brighter than the Charge 3, but without harshness or brashness. 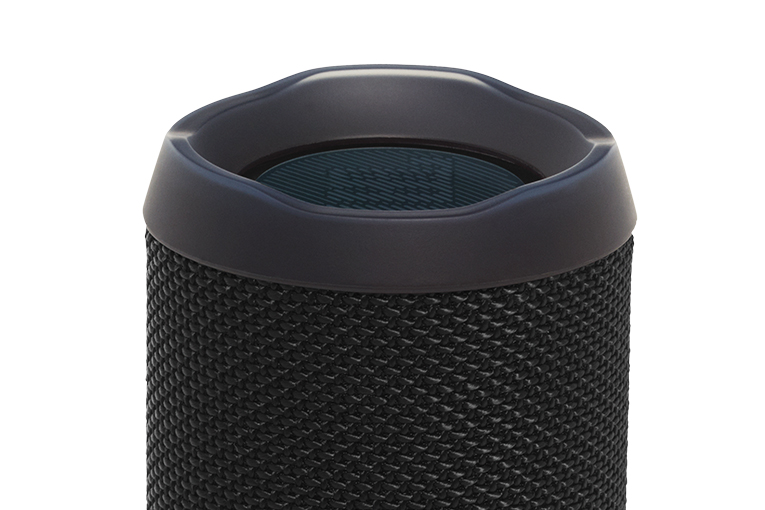 The first disc I listened to was the Robert Shaw Chorale and Orchestra’s exceptionally well-recorded Christmas Hymns and Carols (16-bit/44.1kHz ALAC, RCA Living Stereo). The scoring ranges from unaccompanied chorus to guitar and strings to chorus with full symphony orchestra. The more delicate moments were revealed by the Flip 4 with piquant detail and transparency in such tracks as “Bring a Torch, Jeanette Isabella,” with its accompaniment of strings and tambourine. This held true for the bigger arrangements as well -- “Hark! The Herald Angels Sing” still had good transparency, as the melody was bounced from brasses to strings and back again. There was even a slight implication of stage depth.

“Jack and Diane,” from John Mellencamp’s American Fool (16/44.1 ALAC, Mercury), is a much brighter recording -- its guitars and handclaps are anything but bashful. But though everything seemed close and upfront, there was no harshness in the Flip 4’s sound. For me, the big thing here was Mellencamp’s voice, which had lots of presence and razor-sharp clarity. Listening to other albums, I found that the Flip 4 was consistently good at reproducing voices. If you pay attention to song lyrics, you’ll love this little speaker. 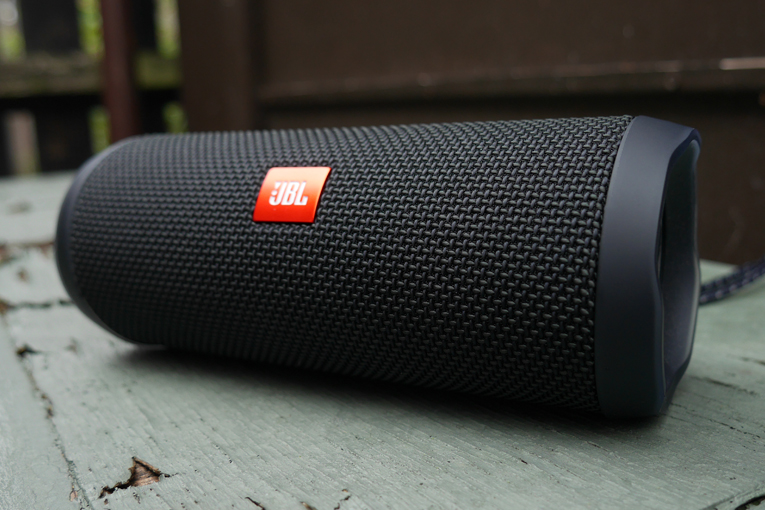 Pursuing more lyrics, I turned to Barb Jungr’s Hard Rain: The Songs of Bob Dylan & Leonard Cohen (16/44.1 ALAC, Kristalyn). Jungr is a cabaret singer with a huge following in the UK, and this is one of her best. The title song, Dylan’s “A Hard Rain’s A-Gonna Fall,” receives an especially dramatic delivery, and the Flip 4’s great midrange reproduction let me understand every one of Dylan’s words. Through the JBL I heard David Bowie’s distinctive voice to great advantage in “Dirty Boys,” from his The Next Day (16/44.1 ALAC, Sony Legacy). You’d think the exceptionally loud interjections from his band would drown him out, but they didn’t through the Flip 4.

There are lots of small Bluetooth speakers out there, but the JBL Flip 4 is one of the best. It provides excellent sound, especially for voices -- but don’t expect low bass and super-loud sound. It’s rugged, durable, and waterproof. Just watch out for those exposed bass radiators! This neat little package should appeal to listeners on the go, especially those who hang out at the beach or by the pool. At $89.95, it’s an attractive choice in a Bluetooth minispeaker.