Most Bluetooth speakers are all-in-one models. Though some of these have “stereo capability,” they deliver little perceptible channel separation. In the BT Bluetooth speakers, Grace Digital has instead created separate speakers that can be used as computer or desktop speakers, or to listen at home to portable music devices and smartphones. The Grace Digital BT accepts audio signals via wires or wireless Bluetooth transmission; it lists for $249.99 USD per pair but can be found for much less. 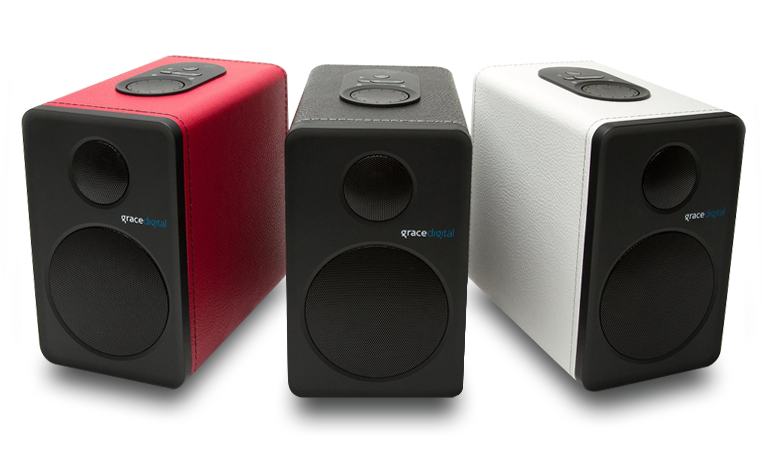 In the box are the speakers, a power cord and transformer, a cable to connect the two speakers, a stereo RCA-to-3.5mm plug for wired connection, an eight-page instruction booklet, and warranty information.

The attractive BTs are covered in leatherette plastic and are rock-solid to the touch. They’re available in black, white, or red, but the front and rear panels and speaker grilles are always black. They feel substantial -- the right speaker weighs 4 pounds, 2 ounces, the left 3 pounds, 10 ounces. Each measures 8.5”H x 4.6”W x 7.5”D.

On the bottom of each speaker are four rubber feet to absorb vibrations and keep the speaker on a stable footing. On the front are the speaker grilles and Grace’s attractive logo. On the back are the speaker terminals and a bass port. 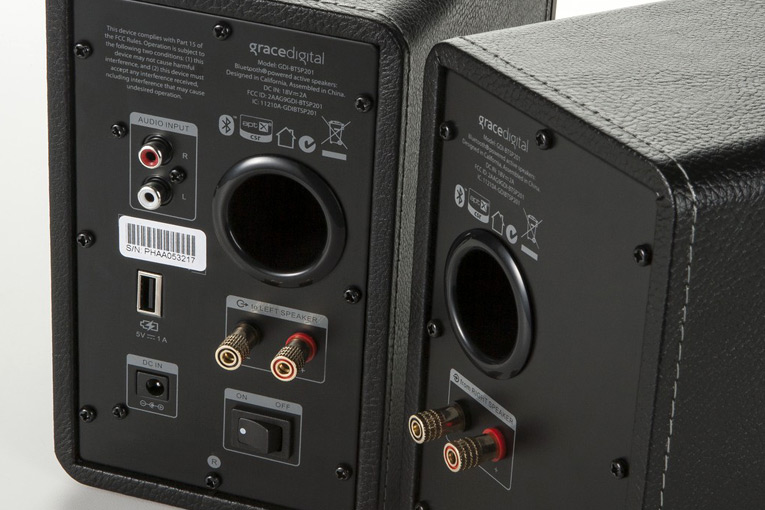 The left speaker has no controls. The right-hand speaker, which contains the 35Wpc RMS amplifier that powers both speakers, is more complicated. On top is a recessed master Volume control, a slider switch to control the Play/Pause and Next/Previous functions of the portable music player or phone playing through the BTs, a Power pushbutton, and LEDs to indicate whether you’re connected via Bluetooth or cable, and if the BTs are pairing or connected. On the rear panel are RCA audio inputs, a USB port for charging equipment, an input jack for the power supply, and a master On/Off rocker switch.

Each speaker has a 1” soft-dome tweeter and 3.5” midrange-woofer with a composite paper cone. The BT’s frequency range is specified as 50Hz-20kHz, its signal/noise ratio as over 65dB, and its channel separation as more than 45dB. It runs on Bluetooth v4.0 and aptX.

Connection was simple, thanks to a helpful diagram in the instruction booklet: Plug the power cord into the DC input on the speaker and into a wall socket, then run the speaker cable from the right speaker to the left, being careful to get the polarity right. Grace has stripped the wires in advance but capped them; make sure you remove the caps. Turn the power to On.

For Bluetooth pairing, all I had to do was press the power switch on the top of the right speaker. The BTs immediately went into pairing mode, with rapidly flashing blue and red lights. I then found the BTs on my Astell&Kern AK380 portable music player, and tapped it. They paired almost immediately, but I found I had to do this pretty much every time I used the BTs. This might vary depending on the handheld device you’re using. The BTs’ range of Bluetooth operation was average for my house: about 25’. 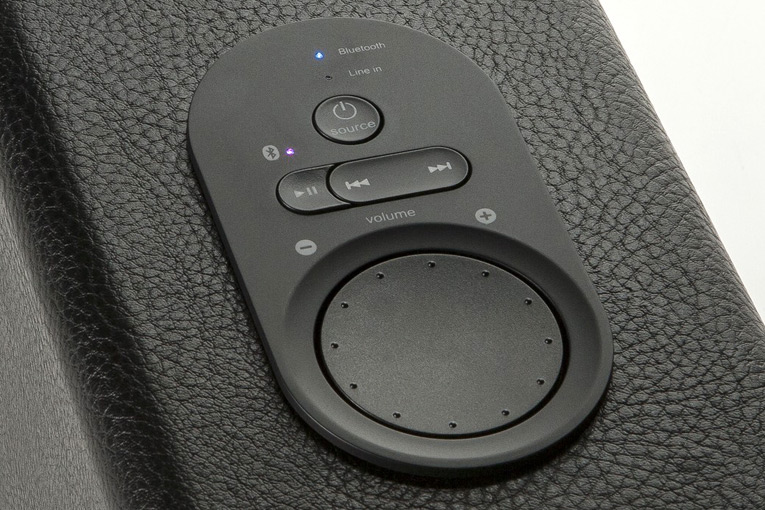 I was surprised to find that the AK380’s volume control had no effect on the Graces’ volume, which I had to adjust with the slightly funky volume control on the right speaker. (This has a lot of little protrusions; you need nimble fingers.) Grace warns in the manual that not all music players will be able to control the BTs’ volume. This won’t be a problem if you use the BTs with your computer -- the speakers’ volume control will be within reach. But if the BTs are across the room and your device’s volume control won’t work, you’ll wish Grace had included a remote handset. I found and set a median volume level that worked for 90% of what I played.

The BTs’ hefty 35Wpc amp provided room-filling volume levels. I was constantly amazed at how much they sounded like very good bookshelf speakers, and proved a satisfying alternative to my main system. The highs were sweet and focused, the midrange fairly transparent, and the bass more present than it had any right to be, given the BTs’ tiny size. 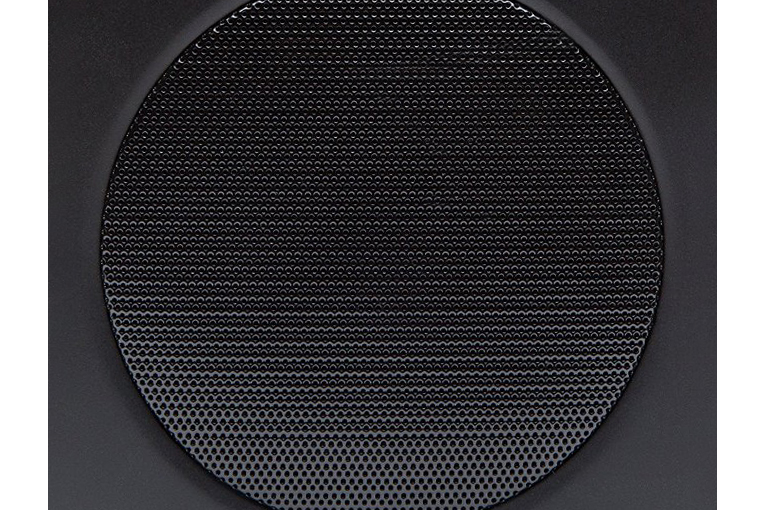 And their imaging was astounding. Loaded on my AK380 is Amber Rubarth’s Sessions from the 17th Ward (24-bit/96kHz AIFF, Chesky/HDtracks) -- the best acoustic album I’ve heard in ages. It consists largely of Rubarth singing, supported by guitars, violin, cello, and some imaginative tapping on those instruments’ bodies. With the Grace BTs 7’ apart and some 12’ from me, each sound was solidly placed without any sound seeming to come directly from either speaker -- above, outside, or beyond them, but never from them.

The soundstage also had amazing depth and width. The “Dies Irae” from Verdi’s Requiem (16/44.1 ALAC, Decca Legends) is scored for soloists, a huge chorus, and a large orchestra replete with solid bass-drum thwacks. The chorus sounded distinctly behind the orchestra, and all forces were naturally spread out, from left to right and from front to back. 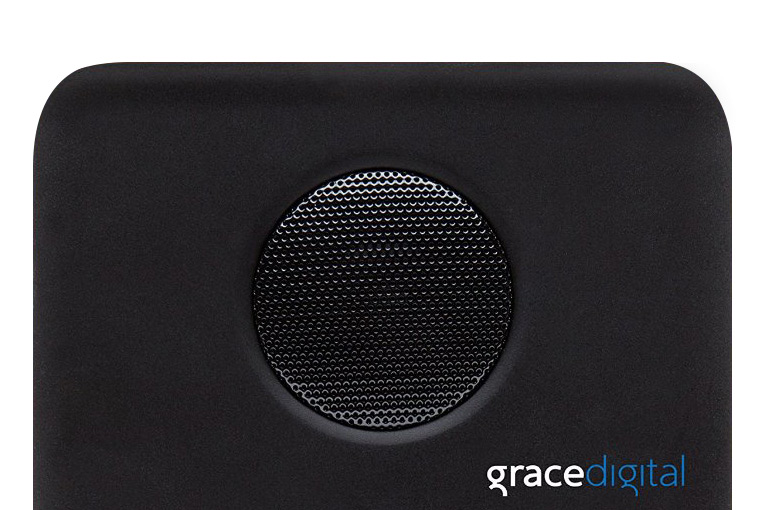 Fed heavy rock, most small Bluetooth speakers fail. Not the Grace BTs. David Bowie’s The Next Day (16/44.1 ALAC, Columbia) has pounding drums, wailing keyboards, saber-rattling cymbals, and, dead center in the mix, Bowies’ gutsy voice. The BTs provided a really enjoyable listening experience with this album, and proved that they’re not only for background music. Through them, The Next Day sounded big enough to sound like real rock’n’roll.

The hip jazz of Donald Fagen’s Morph the Cat (24/96 FLAC, Geffen) was clean and clear as a mountain stream. But any jazz album I played sounded extremely satisfying. In fact, all music, regardless of genre, sounded musical through the BTs. The speakers could deliver quality sound via Bluetooth, but with a wired connection they were subtly better at reproducing the high-resolution recordings I played.

If you want Bluetooth connectivity but don’t want just a single speaker that either collapses a stereo soundstage or mixes it down to mono, Grace Digital’s BT Bluetooth speakers might be just right for you. They can play loud and clean, and sound relatively transparent without omitting the punch of a pair of good bookshelf speakers. The only thing not to like is the lack of a remote control for adjusting their volume level from across the room, and the sometimes quirky Bluetooth pairing. But once the Grace BTs were up and running, I found far more about them to like than I’d thought I could when I first opened their box. Size can deceive.