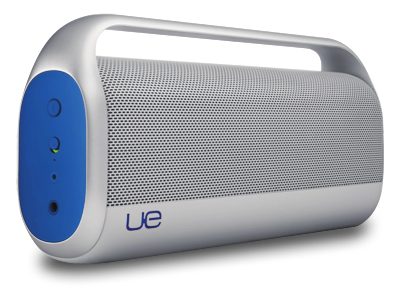 The boombox was introduced to the US in the mid-1970s, after enjoying great success in Japan. Boomboxes usually had at least two speakers (often more), AM/FM tuners, and played cassettes and, later, CDs. They operated on battery power or could be plugged into the wall, and were portable, though the ones we usually think of were very large and heavy. They became synonymous with “loud,” and were featured on TV and in many films. My favorite reference is in Star Trek IV: The Voyage Home, in which Spock subdues a bus passenger whose boombox is loud to the point of pain.

As physical media continue to die on the vine, one of the ways portable sound has transformed is into the combination of a speaker and a controlling device, usually an iPhone or iPod, that communicate via Bluetooth. Logitech has entered the race with the UE Boombox speaker ($249.99 USD), which arrives with equal numbers of pluses and minuses.

Inside an attractive carton are the UE Boombox, an AC cord and transformer, a tiny instruction manual, and a “Safety, Compliance, and Warranty” leaflet. The UE Boombox itself measures 15.2"W x 3.1"H x 6.5"D and weighs 4.4 pounds. It’s sleek, silver, and sexy, with a grille of stainless steel, a base of hard rubber with four little feet molded in, and a built-in aluminum handle. The ends are blue, to match the UE logo on the front. On one end is a big rocker switch for volume up/down, the other end has an on/off slider switch, a Bluetooth button, an LED to show when the unit is on, a 3.5mm jack for connecting non-Bluetooth devices, and a socket for the AC/charging cord. There are no knobs other than the On/Off switch and Bluetooth button, and they don’t protrude very much. The build quality feels entirely solid, and my overall impression was one of Industrial Decorator Lite.

Setup? It’s a boombox! Plug it in, charge it up, turn it on (the On/Off switch leaves visible a small green panel), push in the Bluetooth button until the blue light that surrounds it flashes rapidly, then enable Bluetooth on your control device. I had no trouble at all pairing my iPod Touch with the UE Boombox; it took about 25 seconds.

Logitech claims a 50’ range of wireless operation for the UE Boombox. About the most I could get indoors was 30’, but that’s plenty; 50’ is for outdoors, or in a very large space with no obstructions.

The Logitech UE Boombox can pair with as many as eight devices, and three simultaneously: put two on pause while listening to the third. This would come in handy for friends who are sharing their different music collections, each one stored on a different phone.

I found the carrying handle uncomfortable; when my fingers gripped the handle, my knuckles rubbed against the top of the UE. Also, the handle has no central hollow or depression or bump -- you have to find the center yourself, or end up carrying the unit with one end canted down. When I set the UE down, its weight and hard rubber bottom kept it solidly in place. The UE Boombox is easy to carry from room to room, and with so great a range of wireless operation, the broadcasting device can be left in a central place.

I’ve reviewed other portable speakers from Logitech, and perhaps their excellent sound inflated my expectations of the UE Boombox. I was disappointed. The bass was there, to be sure, but it was generally ill defined and unfocused. The midrange is the best thing about the UE -- voices sounded realistic and pleasing. In “Something’s Coming,” from the original Broadway cast recording of West Side Story (16-bit/44.1kHz ALAC, Columbia), Larry Kert’s light, appealing voice was faithfully reproduced, right down to a slight rasp on some notes. But the bass was not well defined in pitch, nor were the woodwinds as crisp as could be, though the finger snaps and upper woodwinds in “The Dance at the Gym” were just fine: clean and clear, if not the ultimate in presence. 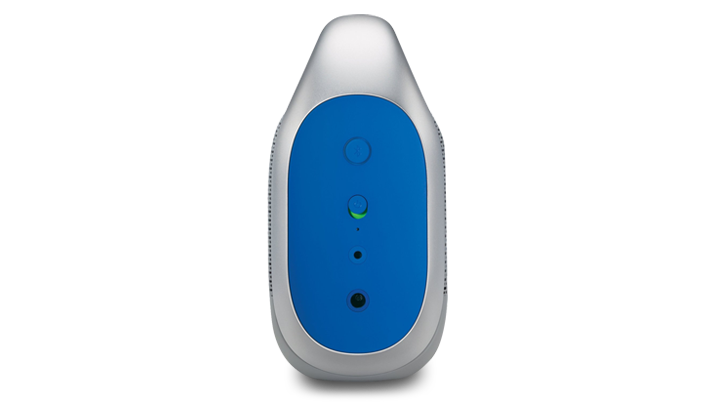 One problem was that the UE Boombox wasn’t really all that loud. Even plugged into the wall, it couldn’t achieve the ear-splitting output levels of the boomboxes of old -- I often wanted to turn it up but couldn’t. This might account for the somewhat mushy sound I heard with all genres of music. Moreover, the sound level began to diminish after only an hour of play with the battery supply.

“The Ascent of Stan,” from Ben Folds’s dynamic Rockin’ the Suburbs (16/44.1 ALAC, Epic), sounded fine at the beginning, when it’s just Folds and his piano, but as other instruments entered the sound muddied, and by the end was unappealing. I then listened to the title song of Steve March Tormé’s Swingin’ at the Blue Moon Bar & Grille (16/44.1 ALAC, Frozen Rope). The UE Boombox presented Tormé’s voice ably, but the walking bass that should propel this wildly swinging number just wasn’t there. 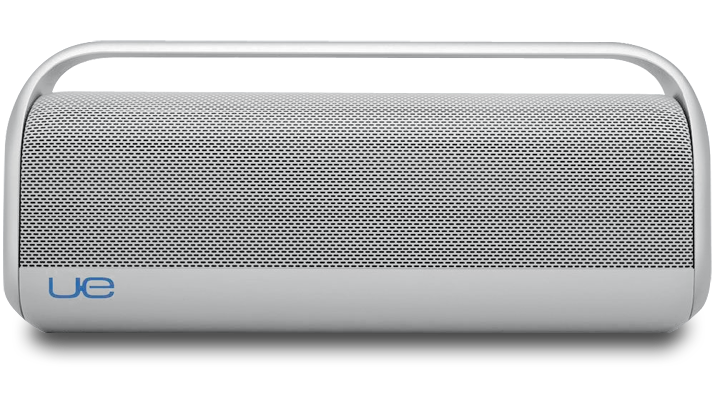 Indistinct low bass in “Radio,” from This Is a Shakedown!’s Love Kills (16/44.1 ALAC, Reversed Image), wasn’t as much of a problem since the drums drive this music forward, and the Boombox reproduced those quite well. Classical music was almost a total loss. The opening of Benjamin Britten’s Young Person’s Guide to the Orchestra, with the composer conducting the London Symphony (16/44.1 ALAC, Decca), was congested and almost totally devoid of transparency. Every type of music seemed to lack presence and sound somewhat muddy, but classical was the worst.

Of course, no Boombox should be expected to produce anything like the sound quality required for serious listening. The Logitech would work OK for a party or background music, however. The Bluetooth pairing and transmission were right on the money, the speaker has good looks and a solid build, and its operation is simplicity itself. It has good range and can be carried from room to room as needed. If that’s what you need and serious listening is not your goal, the Logitech UE Boombox might be the answer.