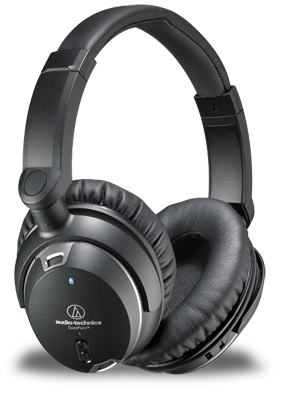 The packaging for Audio-Technica’s ATH-ANC9 QuietPoint Active Noise-Canceling headphones ($349.95 USD) is simple. Open the attractive display box (no plastic window, but a large photo) to find an instruction manual and a sturdy carrying case measuring 8.5” x 8.5” x 2.5”, at its center a coin-like Audio-Technica logo in hard rubber. Like many such cases, this one is designed to be hung from a belt, though I have yet to see anyone carrying a headphone case that way. But you can fit your middle three fingers through it and use it as a carrying handle, which seems much more useful.

Pull the zipper, open the case, and inside are the headphones, their earcups folded flat. In a little zipper pouch are the accessories: a 6.3mm (1/4”) adapter, an airline adapter, an AAA battery, and two cords, both with 3.5mm mini plugs -- a 4’-long straight cord, and another 4’ cord with an inline microphone with single-control switch. Folded flat, the headphones measure about 8” x 8” x 2”, their oval earcups 3.5” x 2.75” x 2”. The ATH-ANC9s are a bit smaller and lighter than headphones I’ve covered in the past six months -- they weigh a mere 8.2 ounces with battery installed.

The style is basic black with silver accents, and the construction is mostly plastic, with metal in the headband, and foam cushions on the earcups and headband. On the left earcup are the power button, a small slider switch for selecting the noise-canceling mode, and an LED that indicates power status and which mode has been chosen. The earcups and headband are adjusted by pulling the earcups away from the band, which has detents; when you’ve got the fit where you like it, the headphones remain firmly in that position.

The ATH-ANC9s felt solid -- for plastic headphones. Some other headphones that make more use of metal feel a bit more substantial, but the A-Ts aren’t wimpy. I just wouldn’t drop them from a two-story window! The only things that felt a bit subpar were the cords, which are fairly thin and seem to lack any extra protection or buffering at their terminuses. One good thing: because the cord isn’t hardwired but plugs into the left earcup, you can always get another, should the cord provided become damaged.

The ATH-ANC9’s claimed frequency response is 10Hz-25kHz, produced through drivers 40mm in diameter. The impedance is 100 ohms, the sensitivity 100dB, and the maximum noise attenuation 30dB.

The ATH-ANC9s fit my head easily; their oval earcups comfortably surrounded my entire ears to qualify them as true over-ear ’phones. I was able to wear them for long periods without suffering any adverse effects. In fact, after an hour I usually forgot I had them on.

Audio-Technica provides a regular AAA battery instead of a rechargeable one, and this was easy to install. It quickly snapped into its caddy at the base of the right earcup; however, getting it out was more difficult. Fortunately, the battery life is fairly long: up to 35 hours with a lithium-ion battery.

Connect one end of one of the supplied cords to the headphones and the other end to your sound-delivery device and you’re ready to go. The noise-canceling circuitry doesn’t need to be engaged for the ATH-ANC9s to work, but I found that I did need to turn it on in order to hear good sound. When I switched to Bypass, I missed the noise-canceling; it was as if some great wind had sucked the high- and upper-midrange frequencies into the house next door. 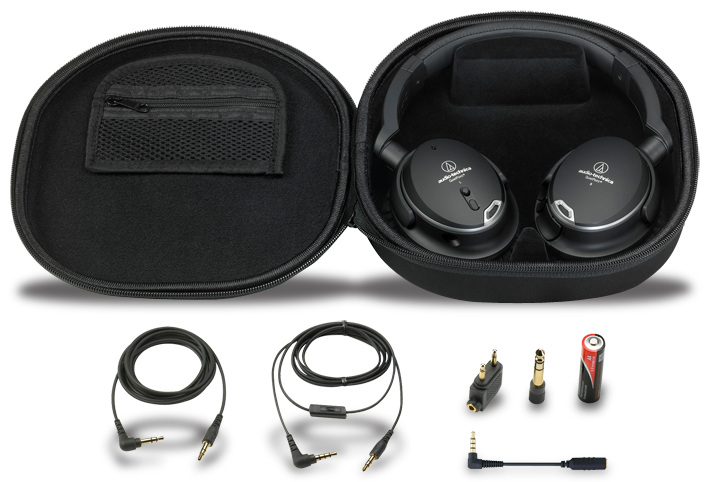 The ATH-ANC9s are unusual in having three noise-canceling modes, and I found their use simple and effective. Mode 1, indicated visually by the LED glowing blue and aurally by a single beep, is geared to frequencies around 200Hz, for use when traveling by jet or train, to block out low-frequency noise. Mode 2 (red light, two beeps) is intended to quell midrange sounds such as crowd noise. Mode 3 (green light, three beeps) works for a quiet home, library, or office environment.

Thirty years ago, I moved to a mountain near Harper’s Ferry, West Virginia, to get some peace and quiet, but so many people have since followed suit that we’re now suburban. My neighbor, who must hate the woods, is gradually cutting down all of his trees, and the noise of his chainsaw comes right into my office. But when I wore the ATH-ANC9 purely as a noise-canceling device, with no music playing, suddenly everything was still: no chainsaw noise, no computer noise, no noise from the other rooms. A-T claims about 95% noise reduction, and I don’t think they’re just bragging.

I tried the ATH-ANC9s with traffic noise (including motorcycles), my noisy refrigerator, and outdoor noise, and was impressed at the level of quiet it created. Some have complained that many noise-reducing headphones replace noise with hiss, but I heard no hiss from the A-Ts, regardless of which Mode I selected.

But just because headphones are good at canceling out noise doesn’t necessarily mean they’re good at reproducing music. Fortunately, the ATH-ANC9s sounded good with just about any kind of music. Without the noise cancelation selected, music sounded dull and lifeless; but as soon as I selected any of their three modes, they came to life with solid lows, a very present midrange, sparkly highs, and no stridency.

The 1979 original cast recording of Sweeney Todd: The Demon Barber of Fleet Street (ALAC 16-bit/44.1kHz, RCA) begins with organ, then a shrill, high-pitched sound to indicate the razor, then the voice of Len Cariou, joined quickly by the rest of the cast, all spread across a wide soundstage. Through the ATH-ANC9 the balances were right, and the uncanny transparency -- spooky in a good sense -- allowed me to hear more of this recording than I feel I have ever heard through conventional loudspeakers.

June Christy’s Something Cool (16/44.1 ALAC, Capitol), originally released in 1955, was such a great success that, five years later, Christy re-recorded it in stereo. Though many prefer Christy’s performances in the mono version, the two-channel edition is a shining example of early stereo wizardry from Capitol Records. Winds open in the right channel, answered by muted brass on the left, and then Christy enters, dead center and a little forward. A solid bass line emerges and takes the music to a place where a velvet cushion of brass in the left channel supports Christy’s voice, while winds comment from the right. It’s a beautiful arrangement that the A-Ts made even more so, with neutral tonal balance and great clarity.

In the early days of stereo, in opera recordings made by Decca/London and RCA, the singers moved about the soundstage to make these productions more convincing as staged aural dramas. One of these was Puccini’s La Bohème, from 1958, conducted by Tullio Serafin, with Renata Tebaldi as Mimì; I have it on my iPod Touch. In the opening scene, Marcello (Ettore Bastianini) and Rodolfo (Carlo Bergonzi) discuss the state of their affairs while pacing around their apartment. Listening through the A-T headphones, there was an overall warm, glowing sound that had excellent presence and a feeling of theatrical presentation.

As these headphones encouraged me to play more and more music and I tried recording after recording, I was never disappointed.

Audio-Technica’s ATH-ANC9 QuietPoint headphones provide excellent sound and effectively block out unwanted clamor. High in comfort and musical fidelity, low in weight, they’d be a good choice for a commuter, a frequent flyer, or someone who spends time in close proximity to machine noises. The cords seem fragile for the long run (and perhaps for the asking price), but they’re easily replaced. If your environment is noisy, you might even want to wear them without music playing, just to have some peace and quiet.