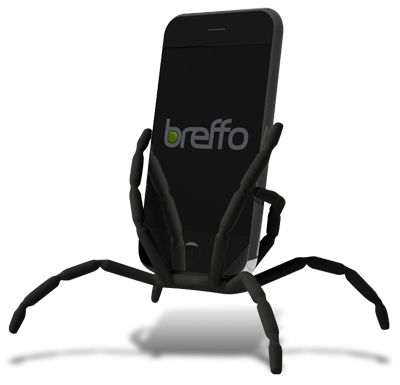 The domination of the personal-electronics industry by Apple’s iPhone, iPad, and iPod families of products has inspired the startups of dozens of cottage industries now making accessories for the hugely popular devices. I recently reviewed a watchband that can turn your iPod Nano 6 into a fashionable timepiece. You’d think that every type of gadget for these devices must by now have already been fully explored, but this spring has brought two new and different ideas.

The first, from Breffo, is the Spiderpodium ($19.99 USD). It’s easy to see where the device gets its name: It has a solid rectangular body and eight flexible legs. The rigid central section has a rectangular opening so that you can use the Spiderpodium as a charging base. Each leg is made of rubber-covered metal, the leg’s diameter narrowing at three points, at which the leg can be easily bent; with a little more effort, you can also bend each leg between these points. Flattened out, the Spiderpodium measures 8.2” x 7.4” x 1/4” thick and weighs just over an ounce. It comes in black, white, blue, pink graphite, green, or purple.

Other aftermarket stands and cases must be just the right size to fit a particular smartphone or pad. Not so the Spiderpodium, which can be bent to fit and support almost any device. Though Breffo’s ads show it being used with Apple products, the Spiderpodium is compatible with all makes and models of pods, readers, and pads, in or out of their cases.

Breffo includes no instructions, only some illustrations of different ways to use the Spiderpodium. You can set it up as a stand for those times you need a third hand for your handheld device. This is probably best for when you’re watching video streamed via Netflix or another source. Even the smallest handheld device can start to feel heavy after an hour or two of Mission: Impossible -- Ghost Protocol. Here’s where the Spiderpodium could come in . . . handy.

Used as a stand, the Spiderpodium has limitations: It’s probably a little too jittery for use with programs that require frequent tappings of a screen. You can, however, use it to hang your device from, say, a pole or the handlebars of a bike. I use it to hang my iPod Touch from the vents in my car’s dashboard, something I’d tried without success to force other stands or holders to do. With the Spiderpodium, it was a cinch. So while the Spiderpodium can imitate a regular dock, its greatest use is for hanging or placing your device in places docks won’t go. In that respect it’s entirely flexible, its use limited only by the user’s imagination -- and the device’s weight. I found that the Spiderpodium could handle anything up to a pound.

The Spiderpodium can hold other small things: bottles, cans, CDs, small books, papers, anything you want. I think it’s found a permanent home in my car; I’ll buy a second one to hang from the top shelf of my computer stand. I recently typed all of last year’s checks into a bookkeeping program, and had to devise some sort of clip to hold my checkbook register open, and up where I could see it; the Spiderpodium would have made the job a lot easier.

There are some drawbacks. It takes a bit of adjusting to get the Spiderpodium’s many legs to lie flat on a surface (hanging is easier), and you’ll find yourself wanting to fiddle with its adjustments for no other reason than you can. There have been a few reports on Amazon.com of legs that have broken off, but I’ve had no such problem -- and one person tells me he’s used Spiderpodiums for more than a year with no problems. The people who did break their Spiderpodiums reported getting great customer service from Breffo. 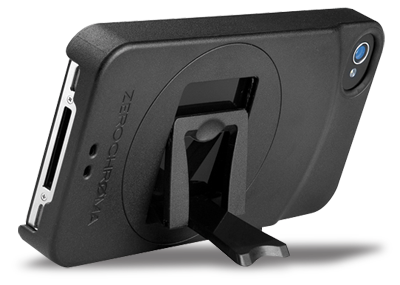 Another stand to recently come my way was the ZeroChroma Teatro ($34.99). Unlike the Spiderpodium, each Teatro model is sized to work with a single model of specific device. The ones I tested were for the iPod Touch 3 and 4, but Teatros are also available for the Touch 5, the iPhone 3/3GS and 4/4S, the iPod Nano 5, all generations of the iPad, and the Kindle 2, 3, and Fire.

Though each Teatro model is unique (the case for the iPhone 4, for example, is lined, while that for the iPhone 3 is not), all have a built-in stand that ratchets out, easel-like, to support the device. This lets you watch with ease streaming video, or take a video phone call while keeping your hands free. The stand for the iPhone 4 and iPod Touch 4 models rotates 360 degrees with four click stops; you can set up your device in portrait or landscape mode, at 14 different angles of backtilt. The case for the Touch 3 doesn’t rotate, and supports only portrait mode, but offers 18 angles of backtilt.

From the almost-three-dimensional demonstration animation clips on Breffo’s website, all of the iPad and Kindle Teatros have 360-degree stands, but the iPod Nano 5 has only two backtilt angles in landscape mode. In this case, a picture is worth a thousand words; go to www.zerochroma.com, click a model, and you’ll see excellent demonstrations that should answer all your questions.

The cases are all like the back half of the clamshell cases that most users are familiar with. Snap the device into a Teatro and it fits snugly, leaving an unobstructed view of the display. The iPod Touch Teatros reviewed here measured 4 3/8”L x 2 3/8”W, while adding to the Touch almost no thickness at all, weighing less than an ounce -- it’s almost exactly like using an iPod Touch without any sort of case at all. The Teatro’s corners offer some protection to the device, but I wouldn’t want to drop one on a hard floor. If you drop your phone or pod often, the Teatro might not be the case for you.

I like the Teatro a lot. I suppose I could have done without a stand for my iPod Touch, but this one works so well I’d now never go back. I stream video from Netflix on my iPod Touch, but had used it little because it was such a pain to hold for long periods. Now that it isn’t, I watch more.

The Teatro seems very well built. ZeroChroma’s director of promotions told me that Teatros had been tested to open and close 10,000 times without a hitch. If that’s not enough, you probably need to get a life.

I liked both the Breffo Spiderpodium and the ZeroChroma Teatro. Each makes the use of a phone or personal device easier and more fun.