I confess I knew little or nothing about Furrion before starting this review, but after doing a little research, I discovered that they’re a huge corporation based in Hong Kong that makes a wide variety of products. In entertainment, their focus seems to be outdoor equipment, and their product lines include a vast selection of marine gear and outdoor televisions. The LIT is their only Bluetooth speaker, and it’s available (in black or white) as a standalone product, but the Adventure Kit throws in some interesting mounting equipment at considerable savings. Furrion lists the LIT and Adventure Kit at $140.95 (all prices in USD). The speaker alone is $119.95. If you bought the accessories separately, it would add up to $48. It’s an interesting design that will appeal to many outdoor enthusiasts—with one big caveat. 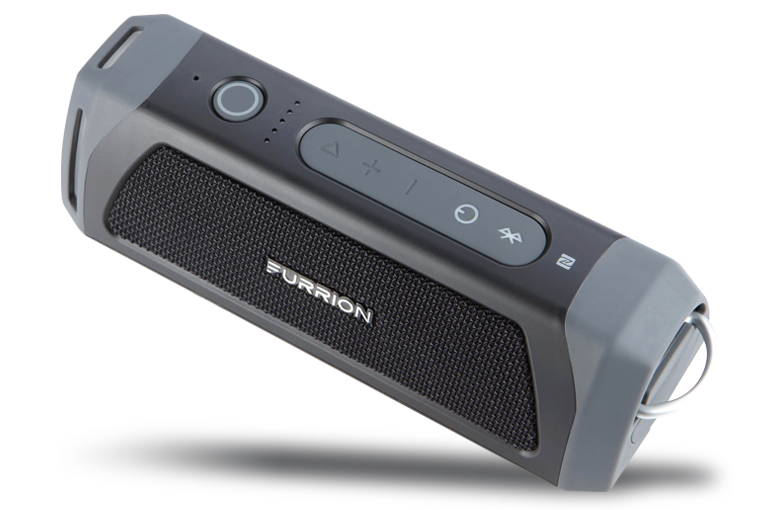 The speaker is a trapezoid measuring 7 11/16″ wide, 1 7/8 ″ deep, and 2 15/16″ high. It weighs 1 1/2 pounds. The materials used in its construction consist of hard rubberized plastic and stiff fabric grilles. The build feels as solid as the proverbial rock. The design is said to be shockproof, and it’s IPX7 rated, meaning the LIT is both waterproof and submersible. It’s sold with a one-year limited warranty.

On one end of the trapezoid is an LED that transforms the speaker into a 500-lumen flashlight. The other end has a sturdy, retractable metal ring for attaching the wrist strap or for hanging via your own method. Below it is a tethered, waterproof sealed port that, when opened, exposes a Micro-USB input, a USB-A jack for charging your devices, and a 3.5mm jack that will allow you to use non-Bluetooth devices.

The front and back of the LIT Bluetooth speaker consist mainly of grille material with a plastic silver logo on each side. The bottom has two full-length rubberized strips to keep the speaker from moving when it is placed on a flat surface. Located between these strips are cut-outs and mounting connections for the straps and the Rail/Bike Mount. The top has a large button for operating the flashlight, and to the right of this is a long strip containing a power button (with voice prompts), the Bluetooth pairing button, volume up, volume down, and play/pause. Between this strip and the flashlight button are five tiny, blue LEDs that indicate battery status. The power and Bluetooth buttons are backlit, but the others are not and are very difficult to see.

The flashlight will turn on and off whether the power is connected or not, but to use its flashing strobe emergency feature, you must have the power on. And to turn the power on, you need to press the power button for a few seconds. 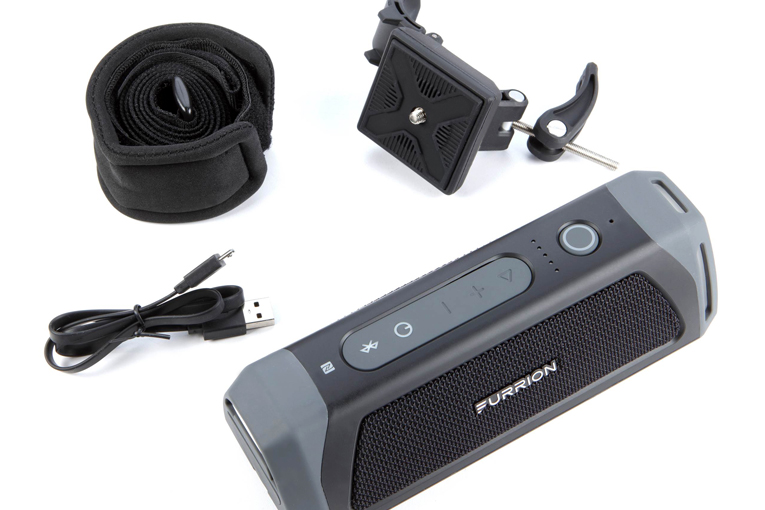 Some additional facts from Furrion: the power output is rated at 10W RMS × 2, which powers two 1 1/2″ drivers. There are two passive radiators. The LIT has an estimated 15-hour run time on a full battery charge, depending on volume. You can pair two speakers for real stereo and set up Google Assistant or Apple’s Siri.

In the name of full disclosure, I must say that I am a partially handicapped, homebound individual. As such, I was not able to thoroughly field test this speaker. But I did simulate situations in my home that proved to me that the mounting systems for the LIT Bluetooth speaker are clever and they work. The instruction book does not make things clear, though there are one or two YouTube videos available that do.

The speaker paired quickly the first time I tried, then instantly and automatically after that. All the controls worked properly, but the play/pause and volume buttons were difficult to use because they were hard to see and don’t have enough of a raised surface for good touch identification. 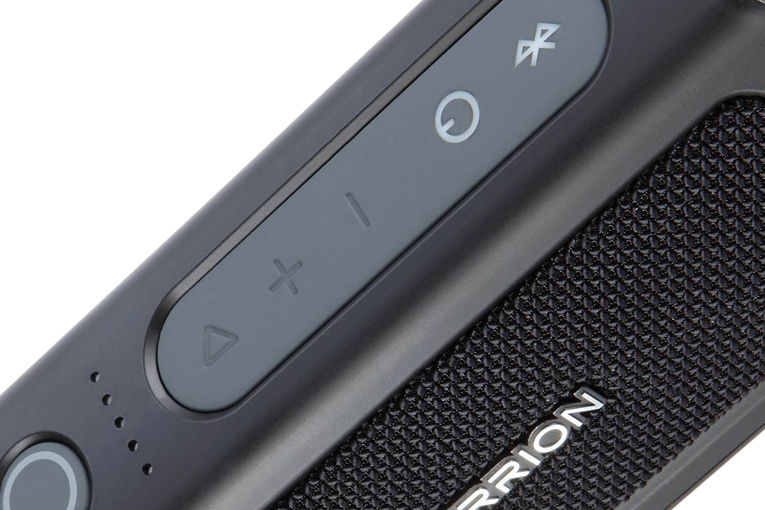 The LIT fit nicely in my hand and was easy to carry around. I found that its weight made it a bit difficult to use the wrist strap, though this was not an issue with the bungee strap or the bike mount. Bluetooth range was about 25′ in my cluttered house. I would imagine that outdoors, with an unobstructed transmission path, the range would be even better.

First off, the Furrion LIT Bluetooth speaker plays fairly loudly, but since it audibly distorts at high volume, you have to knock that down a few pegs. At the highest distortion-free volume level, I think it would be powerful enough for cycling, hiking, or campfire situations, but I doubt it would stand up to anything with a motor, like a motorcycle or a motorboat. 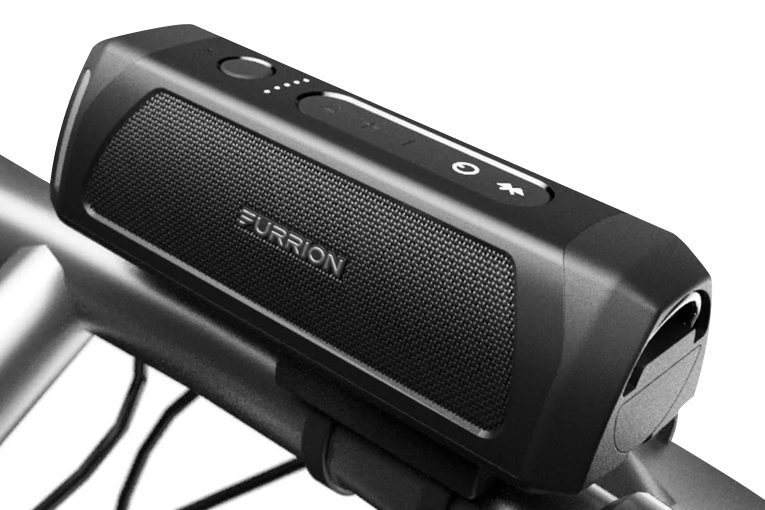 This is the big caveat. Despite all the nifty features, the speaker just doesn’t sound very good. Its midrange is rather harsh. And—no surprise considering the size of the drivers—any real bass is absent, though you can get some thumping lower midrange. The highs, like the midrange, were rather strident and didn’t really sparkle. I suppose if you’re biking along with the wind rushing past your ears, it would do, but for any serious listening, you can do better in the same price range.

“She’s Country,” from Jason Aldean’s Wide Open (16-bit/44.1kHz FLAC, Broken Bow/Amazon Music HD), is a hard-driving country-rock tune, so it’s not supposed to sound pretty. Still, it ought to sound clean and incisive. Over the LIT, the drums had some punch, and Aldean’s vocals were just fine, but the backing guitars in the middle were distorted more than shredded, setting up an unpleasant roar.

“Yesterday’s Rain,” from Spanky and Our Gang’s The Complete Mercury Recordings (16/44.1 FLAC, Hip-O Select/Amazon Music HD), started off in a promising way, with wind chimes and vocals, but as other instruments came in, the lack of bass proved highly detrimental, and distortion in the midrange made one of my favorite recordings sound harsh and unpleasant. 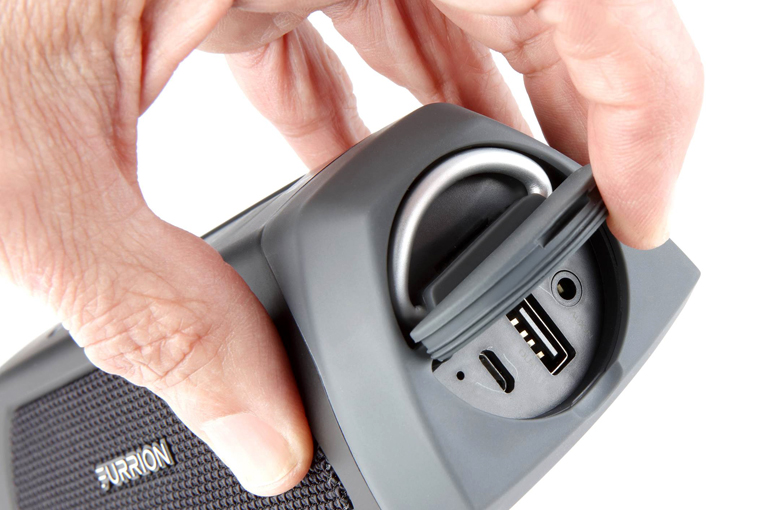 All I can say about the LIT’s performance playing classical music is that it wasn’t quite as atrocious as I expected. Modest Mussorgsky’s Night on Bald Mountain, performed by Paavo Järvi and the Cincinnati Symphony Orchestra (24/96 FLAC, Telarc/Amazon Music HD), has mind-blowing sonic qualities, but through the LIT Bluetooth speaker it sounded like orchestral garbage: harsh, strident, and lacking that all-important bass.

So there you have it. I have nothing but admiration (except for those pesky volume and play/pause buttons) for the LIT’s design, as well as its bells and whistles; however, I feel that little engineering went into making this a speaker that would sound good. It might do for outdoor situations, but you can do better by seeking out the great-sounding speakers from Grace Digital’s EcoXgear division. Many of these have mounting options, and some cost even less than the Furrion.