Two years ago, I reviewed the initial Tribit StormBox, predicting a bright future for the company and its products. It’s been a long wait, but now Tribit has added the StormBox Pro to its lineup, and this new speaker’s performance signals that the company’s future looks just as bright as ever. At $129.99 USD, the speaker outperforms most of the contenders in its price and size range and is on par with a number of other heavy hitters in the portable Bluetooth niche.

Tribit continues to keep its packaging neat and simple: just a cardboard box with pictures of the speaker. It’s easy to open, so you can get down to business right away. The box contains the speaker, a USB-A-to-USB-C charging cord, and a user manual. Outwardly, the speaker looks very similar to its predecessor, but under the hood, there have been some significant changes. 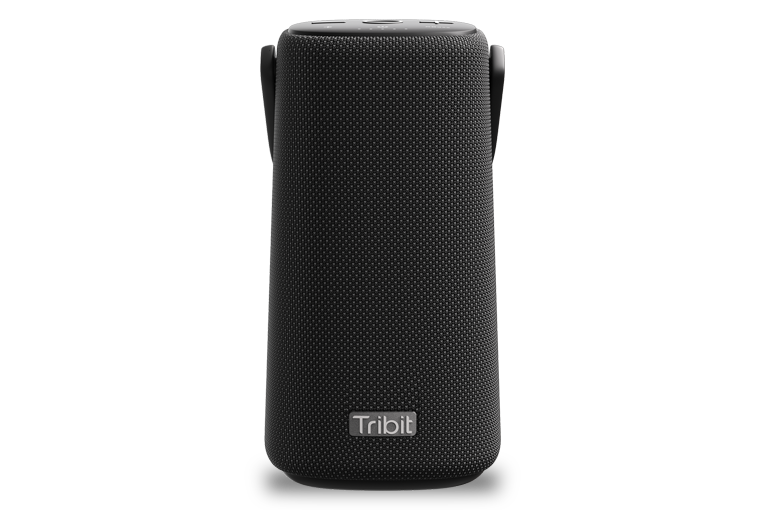 At 7″ tall (10″ with handle) and weighing 2.3 pounds, it’s slightly larger than the original. Tapering from 3 1/2″ square at the base to 3″ square at the top, the Tribit StormBox Pro is basically a squared-off cylinder, completely covered in fine-mesh grille material. On the bottom is a square of rubberized plastic to hold the speaker steady while it is playing at loud volumes. At the top is a carrying handle composed of a tough, flexible rubberized material. On the front, close to the bottom, is a raised Tribit logo. The only available color option is black. Its build quality is brick solid.

On the back, near the bottom, you’ll find a sealed waterproof port that protects the USB-C jack used to charge the speaker and a USB-A jack that you can use to charge your other devices. The simple controls are on the top of the speaker. Volume up and down flank a multipurpose button that allows you to play or pause playback, skip forward or back a track, or activate Siri voice control, depending on how many times and how long you press down the button. These three controls have large, raised icons and are set off in grey, so they’re hard to miss.

Less easily identified are the three buttons beneath the big three that control power on and off, Bluetooth pairing, and bass boost. Unlike the volume and multipurpose buttons, these three buttons are backlit. Below these three buttons are five LEDs that indicate battery status. The Tribit StormBox Pro operates in quasi-stereo, but you can also pair two of them for a wider, more realistic stereo effect. This action will only work with the Pro model. 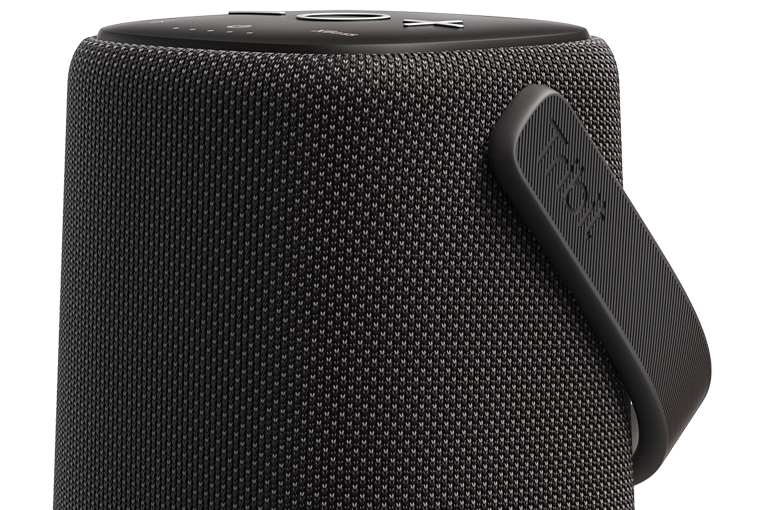 The speaker complement of the Tribit StormBox Pro is impressive. There’s a 3″ woofer to handle the lows and two 1.57″ midrange-tweeters to reproduce the mids and highs in stereo. In addition, there are two passive radiators for low-bass augmentation. Output power is listed as 7.5Wpc for the midrange-tweeters and 25W for the woofer. The Bluetooth version is 5.0 with aptX decoding and a waterproof rating of IPX67. Tribit claims an extended battery life of up to 24 hours, depending on the volume used for playback.

After finding it on my device, the Tribit StormBox Pro paired instantly with my Apple iPod Touch. When I turned it on using the power button, it emitted some rather pleasing electronic chirps to let me know it was on and that Bluetooth was connected. There are also chirping sounds when you turn the power off.

The speaker is easy to transport using the handle and is weighted to stand solidly on its bottom. The controls all had just the right amount of “crunch” to let me know they had been activated but the level of touch necessary was light enough to allow me to easily accomplish the desired action. 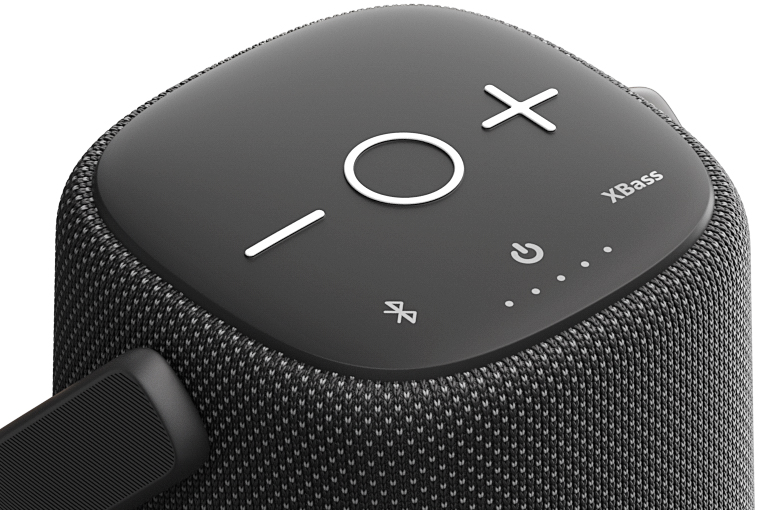 I splashed it in the shower, and it came through with flying colors, indicating that it would perform well in that location or poolside. The Bluetooth range was excellent in my cluttered house; I couldn’t find any dead spots. Tribit claims 100′ total, but I expect that would be with an unobstructed view. I’ve been running it about three hours a day for a week at moderately high volume and have yet to recharge it.

It may sound like a cliché, but in this case it’s absolutely true: this little speaker’s performance is amazing for its size. It has clean, mostly transparent mids and highs, and solid upper bass that is tight and well-focused. I found the sound a lot better with the bass boost—Tribit calls this XBass—turned on. Without it, the sound was a little thin. I imagine the average listener will want to keep this circuitry engaged at all times.

The Tribit StormBox Pro played reasonably loudly, and it was only possible to drive it into distortion by having it wide open with the XBass on while playing a recording that was heavy on synthesized bass.

I had just finished watching Red Notice on Netflix, a most enjoyable comic action heist film starring Dwayne Johnson, Ryan Reynolds, and Gal Gadot. Coincidentally—or not—the soundtrack popped up on Amazon Music HD, so I decided to drop in and check out the music by Steve Jablonsky that accompanies the opening credits (24-bit/48kHz FLAC, Sony Music Entertainment/Amazon Music HD). Tipping his hat to scores like Mission: Impossible and The Pink Panther, Jablonsky’s score opens with drumstick clicks and bongo drums. Other instruments, including a woodwind melody, come in gradually. Under all this pounding, the drums started to make the speaker and the air around it pulse with strong midbass, but surprisingly, the other instruments weren’t lost in the cacophony. I heard impressive transparency and focused sound, which made for an exciting listening experience. 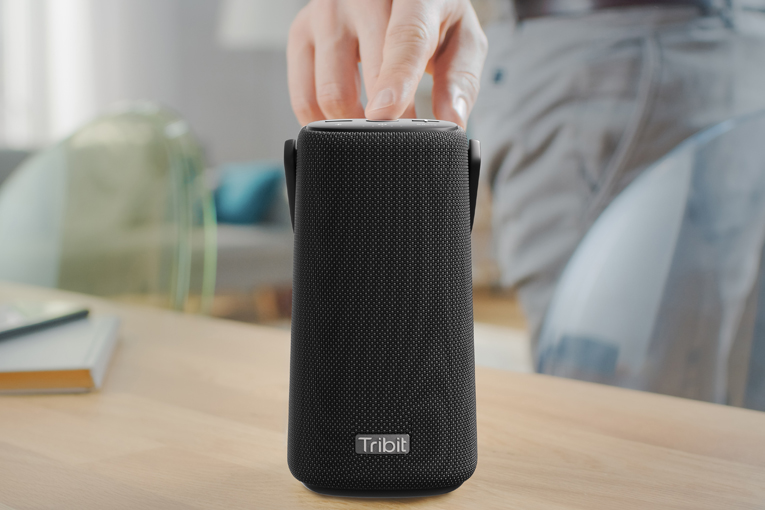 Paavo Jarvi was music director of the Orchestre de Paris for only a short time, but during that period he made a few significant recordings. One of these was devoted to the music of Rachmaninoff—his Symphony No. 3 and Symphonic Dances (24/44.1 FLAC, Erato/Amazon Music HD). The first movement of Symphonic Dances, Non allegro, opens quietly but with great rhythmic precision. As instruments are added to the mix, the music reaches orgasmic climaxes which, in this performance, are tremendously exciting. Once again, I was impressed with the precision and transparent sound that the Tribit StormBox Pro provided. It didn’t become congested or muddy in the midbass and continued to provide good clarity with a fair helping of detail. This is definitely one of the best small speakers for classical music.

Turning to jazz next, I chose a solo piano tune by Dave McKenna from his Christmas Party—Holiday Piano Spiked with Swing (16/44.1 FLAC, Concord Jazz/Amazon Music HD). Not only can I confirm that McKenna is still my favorite solo jazz piano player, I can also attest that the Tribit StormBox Pro reproduced this music with remarkable transparency for such a compact device, and it did so with razor-sharp definition. All the tinkly upper sounds were clear and detailed, and the gruffer boogie-woogie bass lines sounded absolutely authentic—well, as authentic as a 3″ woofer and a couple of small passive radiators can manage.

By keeping things simple and cutting some bells and whistles, Tribit has once again been able to create a speaker with a clear focus on sound quality. And the sound quality is very good—comparable to that of units costing quite a bit more. Its carrying handle makes it easy to transport, it has long battery life, and it’s waterproof, too. Tribit may have cut some features—there’s no 3.5mm input jack for non-Bluetooth devices—but they have included everything essential to achieving good sound in a Bluetooth speaker. The Tribit StormBox Pro is a winner, and its performance proves that this young company is still on the right track.