Note: for the full suite of measurements on the iFi Audio Zen One Signature from the SoundStage! Audio-Electronics Lab, click this link.

Note: for the full suite of measurements on the iFi Audio Go Bar from the SoundStage! Audio-Electronics Lab, click this link.

At 84, reed player Charles Lloyd has expressed himself in a wide variety of settings over his long career, and has always found an audience, whatever his role: Eric Dolphy’s replacement in Chico Hamilton’s popular band; the trendsetting leader of his own group in the ’60s, with youngsters Keith Jarrett and Jack DeJohnette; godfather of the Big Sur musical tribe, which included members of the Beach Boys; or as one of several saxophonists who have been viewed as the successor to John Coltrane. Coursing through everything he has done—and a large factor in how he has maintained his audience all these years—has been a sense of quiet spirituality.

As he’s grown older, Lloyd’s playing has become increasingly mellow and ruminative—an ideal match for his aging tone on tenor saxophone, which has become decidedly grainy. His sound is like the voice of an elderly crooner—craggy and somewhat fluid in pitch—but his ear is still as sensitive as the eye of an Old Master painter. Where he once splashed bright colors around, his palette now has darker, richer tones, his application of color more considered.

These late-career characteristics are on full display on Trios: Chapel (24-bit/96kHz WAV, Blue Note Records), the first of three sets of trio recordings Lloyd will release this year. Featuring the highly simpatico guitarist Bill Frisell—lately, a frequent collaborator of Lloyd’s—and bassist Thomas Morgan performing at an art school in Texas in 2018, Chapel is suffused with quiet, highly textured songs where nothing is rushed and every chord is chosen with care. 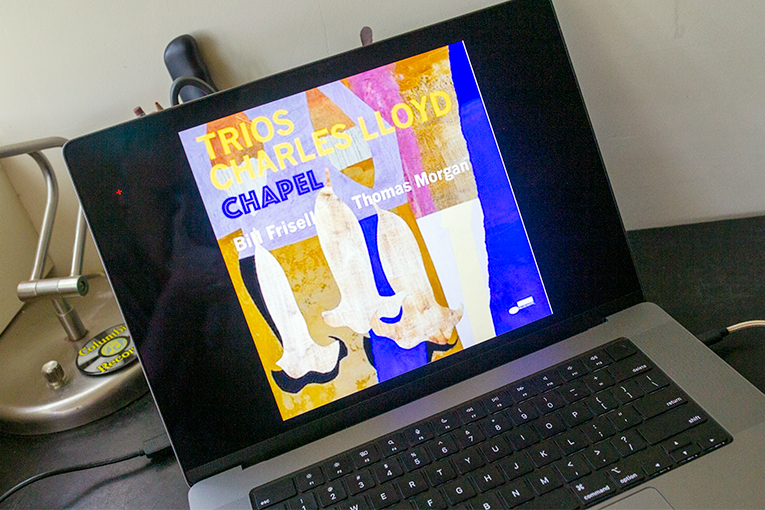 When a trio embarks on this type of meditative journey, the soundstage can become a fourth band member. In this case, consumers should note that the recording process was overseen by Joe “Tone Poet” Harley, and the LP was mastered by Kevin Gray, of Cohearant Mastering.

Given that Chapel embodies Lloyd’s calm, measured nature, what type of sound technology would be a better fit than a component called Zen?

Released this year by iFi Audio, the Zen One Signature DAC ($349, all prices in USD) promises to be “the only DAC you’ll need,” combining, as it does, support for PCM resolutions up to 32/384; DSD256; MQA decoding; and a host of Bluetooth codecs, including AAC, aptX Adaptive/HD/LL, LDAC, and LHDC.

In addition to its coaxial input/output (RCA), optical input (TosLink), and USB Type-B connection, the Zen One Signature has stereo RCA (line level) outputs and a 4.4mm balanced output. 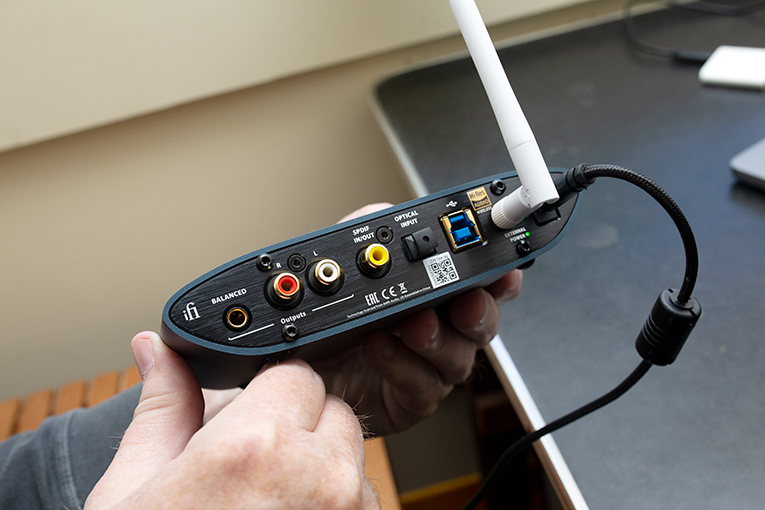 The design of the Zen One Signature’s oval case, measuring 1.4″H × 6.2″W × 3.9″D, is in keeping with the aesthetic of iFi’s entire series of Zen DACs. As I’ve written previously, they’re small, midcentury-modern gems that would not be out of place on the dashboard of a 1960s GM vehicle.

I won’t begin to go into all the Zen One Signature can do; my colleague Dennis Burger did a very deep dive on SoundStage! Access, detailing the various digital audio formats it can handle.

One thing I want to reinforce from Dennis’s review, though, is the Zen One Signature’s seamless Bluetooth connectivity. Anyone who has used Bluetooth to stream music is likely familiar with the various clicks, pops, or dropouts that can occur when switching between sources, or even between songs from the same source. Using a Qualcomm QCC5100 Bluetooth receiver along with some proprietary technology, iFi seems to have eliminated that particular annoyance.

I began by streaming Chapel from Roon on my 16″ MacBook Pro, via Bluetooth, to the Zen One Signature, which was linked via a set of RCA cables to my NAD D 3045 integrated amplifier and Q Acoustics 3050i floorstanding speakers. I was immediately impressed by the depth and transparency of the soundstage. The grain in Lloyd’s tenor playing was stark and palpable on the gently swaying “Ay Amor,” a beautiful piece by Cuban composer Villa Fernandez Ignacio Jacinto, and Frisell’s amplified guitar was exceptionally well balanced with Morgan’s acoustic bass. 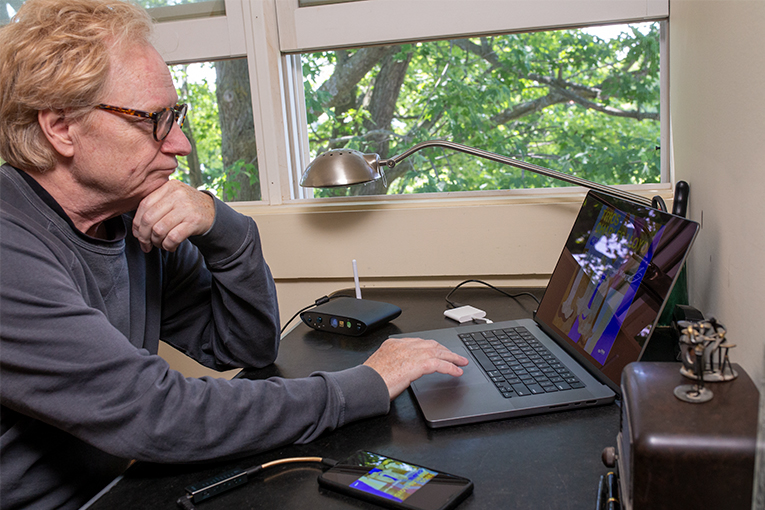 The three original compositions by Lloyd provided rich opportunities for improvisation, with “Dorotea’s Studio” offering a highly variegated rhythmic playing field for each of the musicians after a long, abstract solo introduction by Frisell.

Moving my laptop closer to my hi-fi equipment, I used an AudioQuest Carbon USB cable to connect to the Zen One Signature’s USB input so I could stream the WAV files losslessly.

On an exquisite version of the Billy Strayhorn classic “Blood Count,” the difference in room presence and clarity between the lossy Bluetooth wireless and lossless wired connections was notable. Morgan’s bass had additional resonance, and I heard more texture from Frisell’s muted plucking and ringing harmonics through the USB connection.

The musicians were so far inside Strayhorn’s harmonic structure that I wanted to go deeper into the sonic experience, too.

To get there, I reached for another new iFi Audio release: the Go Bar ($329), a solid-feeling, portable USB DAC and headphone amplifier. The portable DAC market is teeming with competition, yet it continues to stratify into niches as new products come along. The Go Bar has a price point to match rivals like AudioQuest’s Dragonfly Cobalt ($329.95) and the EarMen Colibri ($333), but iFi is positioning it as “the world’s most powerful headphone amp of its size.” 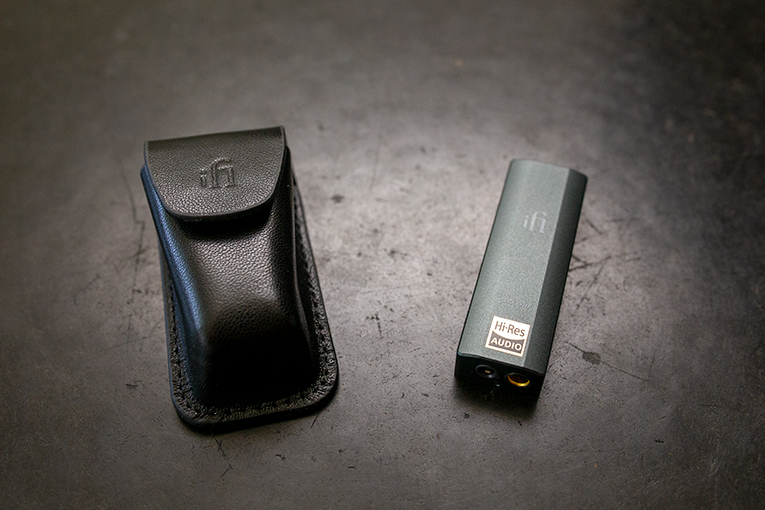 The company claims a frequency response of 20Hz–45kHz (-3dB). The Go Bar uses a 16-core XMOS microcontroller and a 32-bit Cirrus Logic DAC chipset to handle the audio data, and like the Zen One Signature, it supports playback resolutions up to 32/384 PCM and DSD256.

Optional modes—XBass+ and XSpace—provide an analog bass boost and create a larger sense of space, respectively. Exactly how they do what they do, and how XBass+ differs from a similar (but differently named) option on the iFi Zen DAC V2 in my standard listening setup at my main desk, remains somewhat opaque.

Just 2.6″ × 0.9″ × 0.5″ in size—again, a match for its competitors—the Go Bar’s metal case has buttons to control mode selection and volume, and a line of tiny LEDs to indicate the settings and input data rate. These LEDs proved to be pointless, and more than a bit frustrating, since the light-gray print of their identifying labels is virtually unreadable against the slightly darker gray of the case.

On one end of the Go Bar is a USB-C input; on the other are a 3.5mm unbalanced output and a 4.4mm balanced output. A slider enables selection—for either output—of iEMatch, which increases the output impedance and decreases maximum output voltage to suit high-sensitivity headphones and in-ear monitors (IEMs), and can reduce any background noise. Again, that feature seems similar to the Power Match mode offered on the Zen DAC V2. In addition, the Go Bar offers a Turbo setting, which increases the gain by 6dB for more power-hungry headphones. 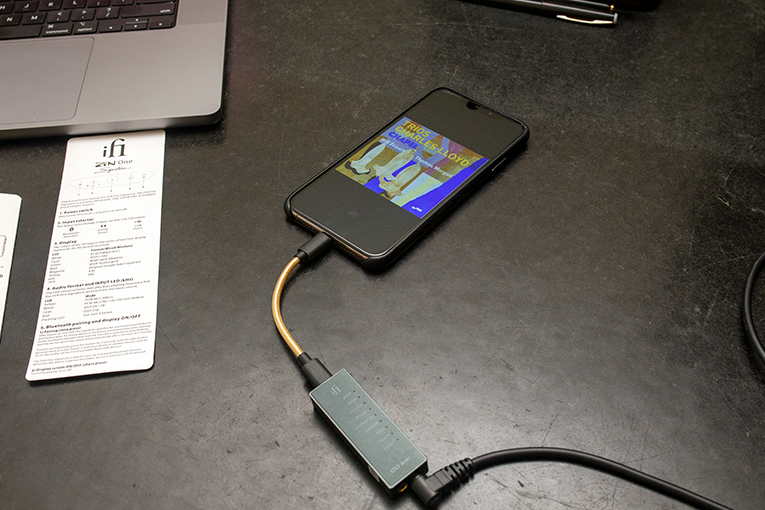 I began with the HiFiMan HE400se headphones I use for most of the listening I do in my office. The Go Bar comes with a braided USB-C cable that I could use to connect to my MacBook’s Thunderbolt port, so I plugged the ’phones into the Go Bar and cued up “Blood Count” again.

It was immediately evident that much of the resonance of Morgan’s bass was missing, and the overall soundstage was a bit more constrained than it had been when listening with the Zen One Signature and my out-loud components.

Before checking out the Go Bar’s optional modes, I decided to get a second benchmark. I swapped it out for my Zen DAC V2, jacked in my HiFiMan headphones, and listened again.

That seemed to produce a fairly close match for what I had heard with my out-loud setup, so it was back to the Go Bar for a bit of tweaking. Engaging the XBass+ seemed to make little difference, but adding the XSpace filter definitely opened up the soundstage and seemed to bring the music more into focus.

Next, I took Chapel on a nature walk, using my iPhone XS Max and a pair of 2012-vintage Shure SE535 IEMs that I seldom leave home without when I’m out and about. As before, I didn’t need to go searching for a dongle; iFi also provides a braided USB-C/Lightning cable to connect the Go Bar to an iOS device.

Once more, the bass on “Blood Count” sounded a bit anemic with no filters engaged; not bad, just not totally fulfilling. This time, I didn’t feel that either XBass+ or XSpace made a huge difference on their own, but the combination of the two brought Morgan’s bass and the bottom end of Lloyd’s horn into higher contrast. 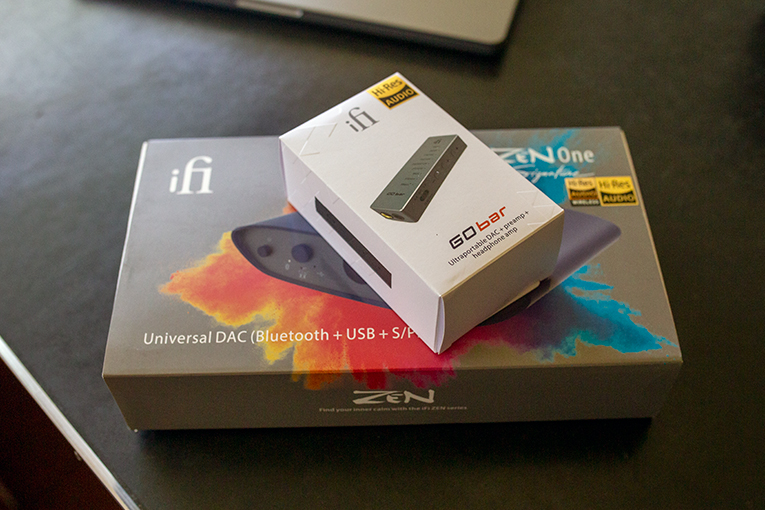 Make no mistake, though; the Go Bar offers a far superior listening experience to the iPhone’s built-in DAC, which rendered “Blood Count” with about as much depth and spaciousness as you’d expect if you were listening to it on FM radio. In other words, without the Go Bar, the music still sounded compelling and soothing, just not immersive.

And immersiveness is the way to go with this recording. In accordance with Lloyd’s long history of espousing peace and tranquil living, Trios: Chapel takes you inside a lovely sonic experience, and the closer you can get to it, the more you’ll enjoy it.

Note: for the full suite of measurements on the iFi Audio Zen One Signature from the SoundStage! Audio-Electronics Lab, click this link.

Note: for the full suite of measurements on the iFi Audio Go Bar from the SoundStage! Audio-Electronics Lab, click this link.