In July 2013 I reviewed the Grace Digital Mondo, a portable Wi-Fi player and radio that can easily be moved from room to room. Grace’s Encore ($199.99 USD) is a larger, more solid component that you’ll want to leave in place, but like the Mondo, it lets you experience a world of music and conversation, from stations in your hometown to broadcasts from Australia -- provided you have a Wi-Fi network.

The Encore comes with a remote control (batteries included), a power adapter and cord, and an RCA-to-3.5mm mini patch cable for optional device connection. The 54-page, single-language instruction booklet is a far cry from the “quick-start” guides that are all you get from too many manufacturers. The Encore’s manual isn’t perfect, however; here and there, it includes instructions for the Mondo instead of for the Encore.

The Encore’s body is of wood painted flat black on the top, bottom, and sides; the front and back are of flat-finished black plastic. Feet of rubber and plastic allow for sturdy placement on hard surfaces.

On the front panel is a 3.5” color LCD screen flanked by round grilles that protect the 3” drivers. To the left of the screen is a 3.5mm headphone jack. On the bottom panel is a round grille covering the 4” woofer. On the rear, from left to right, are the master on/off switch, the power-cord jack (Grace also offers a battery pack for $39.99), a USB jack, auxiliary inputs (RCA), and line-out jacks (RCA). At the far right is a port, to support the Encore’s bass response.

Most of the controls are on the top panel: a small Volume knob (push to mute) and, below it, the Power pushbutton. You turn the larger, Menu knob to scroll through screen icons, and select an item by pushing the same button. Below the Menu knob is a button that returns you to the previous screen.

Between the Volume and Menu knobs are 14 buttons, 12 of them arrayed in three rows of four each. Five of these buttons are presets for regularly used stations; a sixth, Shift, accesses five more presets. The other buttons are for: Now Playing, which calls up track information when you’re listening to Pandora; Skip Forward and Back, Play/Pause, and Pandora’s Thumbs Up and Thumbs Down ratings. Below these dozen controls are the last two: a long Snooze button, and Home, which returns you to the home page, no matter where you are.

Including its knobs and jacks, the Encore is 13.5”W x 6”H x 9.75”D, and to say it’s hefty would be an understatement. It weighs 8.5 pounds. I imagine, due to its size and its clock-radio capabilities, that most Encores will end up in bedrooms, where they’ll take up about a third of the typical nightstand.

Setup was relatively easy. Using the Menu knob, I scrolled to the Settings icon and selected Wi-Fi, then Network. A list of networks was displayed (I live in the country, and was surprised to discover how many of my neighbors have networks). I selected mine, and the rest was automatic. You might be asked for a password; if so, you’ll see a keyboard displayed on the screen. You can quickly enter your password by twirling the Menu knob, then pushing it in when you reach the right letter or number. Most of the other settings are automatic, though they can also be set manually. The Grace Encore figured out my location automatically, and was thus able to find and set all of my local stations and WeatherBug.

The real joy of using the Encore was the adventure of finding stations. There are thousands of Internet stations, most of them free. The Encore comes with icons loaded for Internet Radio, Pandora, iHeartRadio, SiriusXM, Local, and music services such as DAR.FM, Live 365, NOAA Weather Radio, NPR, and Podcasts (which includes a huge number of BBC broadcasts). To search, say, Internet Radio, which has the largest number of stations, select that, then search by local stations, location, genre (Rock, Jazz, etc.), or even by college. Each selection will populate a list that can be broken down into more specific categories, such as Star Wars Radio or Halloween Radio. You can not only get Christmas stations all year round, you’ll have a healthy choice of different ones. You can even access shortwave broadcasts. If your idea of a good time is listening to the control tower of Reagan National Airport, live it up!

Most of the subscription stations, such as SiriusXM, offer free introductory trials; if you already have a subscription for your home or car, you can usually add the Grace Encore to it for a small fee. Grace supports a wide range of file types: AAC, AAC+, ADTS, AIFC, AIFF, CAF, MP3, NeXT, OGG , WAV, WMA, ASX, M3U, PLS, HTTP, HTTPS, RTSP, Apple Lossless, and FLAC 24-bit/96kHz. You’ll probably be able to listen to just about anything you want to.

Some services and stations, such as iHeartRadio, display album covers, and the Encore’s screen is great for viewing them: It’s big enough to reveal a lot of detail, and the colors seem fast and true. I also like the Encore’s clock-radio functions. You can set up to seven different alarms, or be awakened by one of your presets or any station you choose. Unlike with most clock radios, you can set the duration of both the snooze and the sleep timer to suit your needs. When the radio turns on in the morning, the screen will display whatever your chosen station is playing; when the radio is off, the screen displays the time in large, readable figures.

You can access the music on your computer to play on the Encore. But your files can’t be too large, and not over 250,000 songs (files). The way my large collection is set up with iTunes, I could make it work only by searching among Genres, and then picking one of the smaller ones; e.g., Cajun or Celtic. Then I could load all the titles in that Genre, and they played just fine. There’s quite a bit of information on this in the instruction manual -- and if you get stuck, you can call Grace’s tech-support line.

One of the great things about Internet Radio is the number of free stations; one of the worst is most of those stations’ sound quality -- almost all are MP3s of low to midrange bit rates. However, things are improving. iHeartRadio has just switched to AAC for all of its stations. I could find no station that was broadcasting at CD quality, but the Encore’s list of supported formats seems to indicate that it’s ready and willing to play them. So to get an idea of the Encore’s sound quality, I used the supplied cord to hook up my iPod Touch’s output jack (3.5mm) to the Grace’s stereo inputs (RCA). I had to select the Auxiliary input from the Encore’s home screen, but the radio automatically switched to stereo from mono.

Speaking of which, stereo is curiously handled by the Encore -- its default setting is mono. You have to go into the menus to set stereo. This is one place where the manual actually describes the Mondo, not the Encore: referring to a 1” tweeter and a 3” woofer, it recommends that you choose mono. Don’t -- the Encore can handle a stereo signal perfectly well.

The Encore doesn’t have onboard Bluetooth, but an inexpensive Bluetooth dongle can be plugged into its USB port. I didn’t have such a dongle, so opted for the cable connection, which gave me pretty good sound. Bearing in mind that two 3” drivers and a 4” woofer aren’t going to sound like a pair of floorstanding speakers, the Encore sounded darned good -- certainly at least as good as most portable Bluetooth speakers. It had sweet, non-strident highs, a clear and neutral midrange, and solid midbass. The title song of Duran Duran’s Astronaut (16-bit/44.1kHz ALAC, Sony) begins with slashing guitar chords, brightly struck cymbals, and then a thumping kick drum. I’ve listened to “Astronaut” often at the gym, through various headphones, and it didn’t disappoint through the Encore. It sounded very solid, with punchy midbass and clearly intelligible voices. 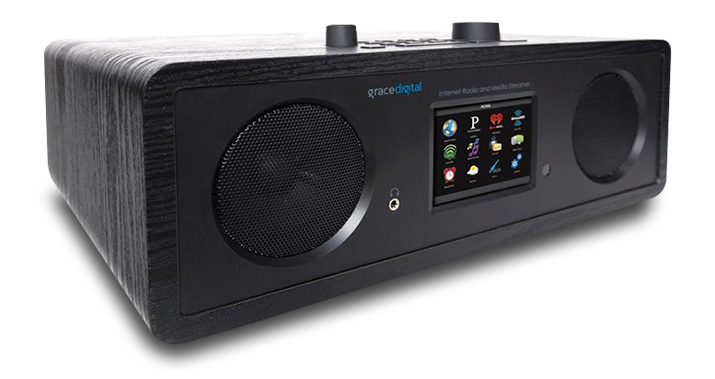 Ernest Ansermet and the Suisse Romande Orchestra’s recording of Beethoven’s Symphony No.5 (16/44.1 ALAC, Decca) sounded full and rich through the Encore: aggressive violins with no shrillness, rich and warm cellos, excitingly brassy horns. Ansermet/SRO’s recording of Waltz of the Flowers, from Tchaikovsky’s The Nutcracker (16/44.1 ALAC, Decca), begins with pungent woodwinds punctuated by scintillating harp passages. The various instrumental colors proved no problem at all for the Grace, and when the waltz itself began, the double basses were audible with good, solid downbeats that made the piece a real dance. Having that 4” woofer and port definitely adds a bass foundation that most small radios lack.

I knew then that if station x or y didn’t give me good sound, it was the fault of the station, not the Grace. There were some surprises. The AAC stations on iHeartRadio often sounded very good, as did those on Pandora. Pandora is a lot of fun. You can use its pre-existing “stations,” such as Adele Radio or Rolling Stones Radio, or you can create your own. I created “10cc Radio,” which gave me songs not only by one of my favorite rock bands, but also mixed in some Beatles, Paul McCartney, America, Foreigner, and Atlanta Rhythm Section. Oddly enough, the music channels on SiriusXM aren’t of the same caliber. But usually, I visit SiriusXM for its old-time radio shows, and those sounded just great.

All the things the Grace Digital Encore will do runs to an impressive list. It gives you access to thousands of Internet stations and subscription services, as well as the music on your computer. Given a good signal, it sounds more than respectable. And it’s a full-featured alarm clock. Its list price is a bit high, but you can find it online for around $175. At that price, it might be just what you need to fulfill your sense of musical adventure.