XBA-H1 measurements can be found by clicking this link. 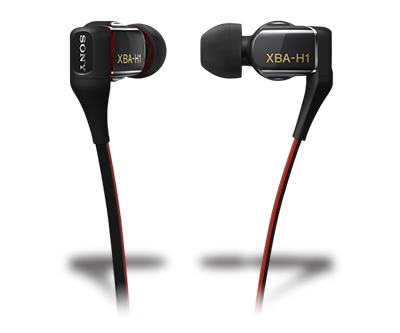 Making a hybrid is tough. You’ve got to cram two differently shaped drivers and maybe a crossover circuit into a tiny enclosure that can slip into your ear canal, all without introducing acoustical obstacles that add ugly-sounding dips and peaks. But Sony’s one of the very few headphone manufacturers to make its own balanced-armature drivers (most others buy them from Knowles Acoustics), so it may know some things the competition doesn’t.

Sony made a very smart move with the XBA-H1 that has nothing to do with the hybrid design: It included seven sets of eartips. Four are conventional, hollow silicone tips. Three are special noise-isolating silicone tips filled with rubbery, foamy stuff that makes them more solid and, presumably, more noise-isolating.

One more smart move: Sony has thrown in a simple, compact carrying case of Cordura that works sort of like a coin case. Just wrap the ’phones up, shove ’em in the slot, and they’re safely secured, without the hassle of tiny zippers or snaps.

What’s missing? There’s no inline microphone or remote. But the flat, 1.2m (3.9’) cord has a cool color scheme of red and black. That’s something, I guess.

I had a hard time getting a good seal in my ears with the noise-isolating tips, but my ears ain’t yours, and more options are always better when it comes to eartips. Call me old-fashioned, but I still prefer a plain old XL-size silicone tip -- yep, like you get with the $10 in-ears you buy at Walmart or in a truck stop.

Despite packing a side-firing 9mm dynamic driver and a balanced-armature driver, the XBA-H1s are just a little larger and subjectively no heavier than your typical $50 in-ears. When they accompanied me during several hours of travel on Los Angeles’ Metro buses and trains, it felt almost as if there was nothing in my ears.

It didn’t sound as if there was nothing in my ears. The first time I heard the XBA-H1s -- after breaking them in for ten hours by letting them play to no one -- was when I began a 45-minute trip on the Metro Orange Line. I’ve enjoyed the Sony balanced-armature headphones I’ve heard to date, but still I cringed a little, bracing for the harsh, highly colored midrange of the Scosche IEM856md and almost all other dual-dynamic-driver in-ears I’ve heard. Instantly, though, I knew I’d like the XBA-H1s.

When I played Led Zeppelin’s “The Song Remains the Same” (16-bit/44.1kHz WAV, Atlantic), I heard in the track what seemed a nearly perfect tonal balance, with lows, mids, and highs working together instead of fighting each other, and no apparent spikes or dips in the response. Made with old recording technology, with heavily overdubbed and somewhat trebly guitars, and Robert Plant pushing his voice to the limit, this isn’t an especially nice-sounding recording -- any flaw in your headphones or speakers and it starts to fall apart. Yet “The Song Remains the Same” was as smooth and neutral and satisfying as I can remember it ever sounding. The guitars were still dense, Plant was still wailing, John Bonham was still bashing the hell out of his snare -- yet nothing grated. Maybe the best part was John Paul Jones’s bass; the XBA-H1s perfectly captured the subtleties in his mix of fat 1970s bass tone and precise pickin’.

A lot of K-pop tunes are mixed with a tonal balance that’s too bright for me. Maybe it works for 12-year-old Korean girls. Anyway, K-pop boy band BigBang’s “Haru Haru” (256kbps MP3, NMT) tends to highlight excessive brightness in headphones. If the tonal balance is too trebly, you can’t stand to listen to the tune for long. Through the XBA-H1s, the sound was clear but not bright. Rather than want to pluck the ’buds out of my ears, I listened more intently, enthralled with the extra detail I heard in “Haru Haru”’s lush background vocals. I could actually pick out individual singers, something I either couldn’t do before, or couldn’t stand to do because of the brightness.

Holly Cole’s extraordinary rendition of “I Only Have Eyes for You,” from her recent Night (16/44.1 WAV, Tradition &  Moderne/Rumpus Room), made its way through the XBA-H1s with captivating clarity. The ambient piano chords stretched across a huge soundstage; dual cabasas (shakers) sounded as if they were being played about 1.5m to either side of me; and the clarinet seemed to appear dead center, just a couple of feet in front of me. Such lush layering -- a common feature of multitracked recordings -- was something the XBA-H1s picked apart easily and cleanly.

How did Cole sound? Clean. Almost uncolored (sonically -- not in terms of emotion). She might have sounded perfect with about 0.5dB less oomph at 3 or 4kHz, but that’s just me -- you might well think the opposite. Regardless, once again, the XBA-H1s’ combination of full yet somehow still accurate-sounding bass, neutral mids, and fantastic upper midrange and treble detail won me over.

Listening to the double-bass intro that launches “The Blue Whale,” from saxophonist David Binney’s terrific Lifted Land (256kbps MP3, Criss Cross Jazz), I was once again struck by the XBA-H1s’ ability to convey both the power and the precision of a great bass player -- in this case, Eivind Opsvik. Every note had the proper heft and groove, as well as the sense of growl and buzz and expression that keeps the acoustic double bass at the heart of most jazz groups even today.

I’ve worked on reviews of some 100 earphones, for websites including Sound &  Vision and The Wirecutter, and I can’t think of anything I’ve tried for under $300 that I like better than the Sony XBA-H1 earphones. That’s not to say that there aren’t other great midpriced in-ears out there. I really like Westone’s Adventure Alpha ($199), which has a similar tonal neutrality but doesn’t match the XBA-H1s’ detail. (It should last longer outdoors, though.) I like RBH’s EP2 ($179), but it’s more of a basshead’s ’phone, and also lacks the XBA-H1s’ detail. I like the Torque Audio t103z ($179) partly because its sound can be tuned using six different filters -- but again, it can’t touch the detail provided by the Sony XBA-H1s’ balanced-armature drivers.

Sony also offers the XBA-H3 hybrid earphones ($349), which marry a dynamic driver to two balanced armatures, but I’ve heard it only briefly, at an audio show. Seems like, for the money, the XBA-H1s will be tough to beat.