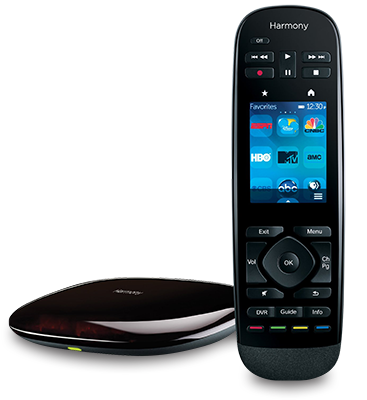 Last March, I gave the Logitech Harmony Touch universal remote control a positive review, but noted some things that might be improved. Now comes the Harmony Ultimate, in which almost everything left unfinished in the Touch is resolved.

The Harmony Ultimate itself looks almost identical to the Touch; it’s the same size (7.25”L x 2.25”W x not quite 1” thick), though at 4.8 ounces it weighs slightly less than the Touch’s 5.7 ounces. The Ultimate looks just as sleek and gleaming, has the same buttons, and the icons for each Activity and device can still be customized. The battery is still not serviceable by the consumer; when it dies, the device dies.

There is, however, one big difference from the Touch: a bulge on the Harmony’s bottom, about 2” from the front end, that guides the hand forward so that the thumbs can more easily reach the hard buttons -- play, pause, skip, and record -- above the screen. I still need two hands.

The Harmony Ultimate Hub “turns RF signals from the remote control into IR and Bluetooth commands your home-theater devices can understand,” says Harmony's website. It measures 5” x 4”, has beveled edges, and is about 1” high, with a sleek, black, semitransparent surface that in my room collected dust faster than has any electrostatic filter device intended for that purpose. The word “Harmony” is centered on its top, and on the back are an input for the AC cord and two ports for plugging in the Mini Blasters. Also on the back is a button for pairing or resetting. On the front are LEDs that indicate power on/off; these light up when the Hub is receiving information. The Hub will work with the Harmony Touch, and is available for sale separately ($99.99), or with an app that allows you to use your smartphone or iPod Touch instead of a Touch or Ultimate remote. Since the prices of these different configurations run from $99.99 to $349.99, you might say the new line is affordable to almost everyone. 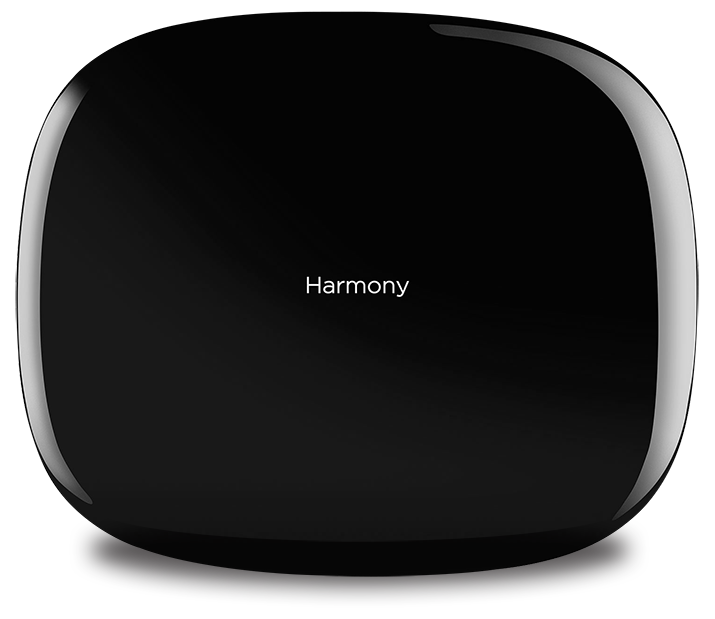 The Mini Blaster essentially extends the range of your Harmony remote’s infrared signals. Each Blaster measures 1.5”L x 1”W x 0.5” thick, with a connecting cable 8’ long. The charging station, apparently the same as that used for the Touch, cradles the remote in a vertical position. After getting used to it, I have found this vertical storage much more intuitive and natural than the old horizontal cradles, and it has a much smaller footprint.

If you’ve already set up an account on My Harmony and have settings for a Touch remote already in play, you can transfer those settings to the Ultimate. Only one or two of my settings didn’t make the jump, and were easily added. If you’re new to Harmony, you’ll need to set up an account and configure your remote by putting in codes for all of your devices, then setting up your Activities. Harmony’s new website makes this relatively easy; if you get stumped, you can call the consumer-support line, which is one of the best and most helpful in the industry.

The setup procedure gets the remote connected to your Wi-Fi network. You can then make most of your changes via the remote, without ever again having to link it to your computer. Remember, with older top-of-the-line Harmony remotes, what a pain it was to have to plug in not only the remote but its wireless extender? That’s all gone, and good riddance.

Using the Harmony, you can choose which device sends the IR signals needed to control your components: the remote, the Hub, or the Hub with Mini Blaster 1 or 2. My setup is atypical. My 65” Mitsubishi display is in front of me, and the electronics are to my right, along a wall, starting about 2’ in front of me. To my right and slightly behind me is a Logitech Squeezebox Touch digital player -- I need it there so I can read its screen as I scroll down lists of titles.

I began by placing the Hub before me on a glass table and assigning to it all of my components except the Squeezebox. I found that the Hub could send out the proper signals to everything but my Oppo BDP-83 universal Blu-ray player. I thought the problem was that the Oppo sat on one of my rack’s highest shelves -- but my Psyclone HDMI switcher sits even higher, and the Hub could communicate with it perfectly. After fooling around with repositioning the Hub, it became apparent that I needed a Mini Blaster. I put one of those right at the front of the Oppo’s shelf, fastening it down with a super-stick double-face hanger, assigned the Oppo to be controlled by the Hub plus Mini Blaster, and bingo -- it worked perfectly.

But problems still remained. I needed more than the 8’ of cable Logitech provided for the Mini Blasters. I could plug the Blaster in, but the cord hung in the air 2’ above the floor. Told that Logitech had no extension cables, I went to RadioShack -- but their 3/32” adapter didn’t fit exactly, and the salesman and I concluded that Logitech’s Mini Blaster plugs must be proprietary or sized to a European measurement standard. Back to the drawing board. I played around with the Hub’s position and finally found one that worked for all of my equipment except the Squeezebox. I reset the Oppo for Hub only.

Too far from the other components to be controlled by the Hub or a Mini Blaster, the Squeezebox had to be controlled a different way. I assigned it to the Harmony Ultimate. This means that, when I use the Digital Music Activity, I point the remote at the Hub, which sets the preamp to the right input (and turns off everything not needed for this Activity), then point it at the Squeezebox and tap Help, which turns the Squeezebox on. A small blip. After my experience, I can see that the Ultimate will probably work with any layout of equipment.

Though I found a good solution, I suggest that Logitech make the Mini Blaster cords 12’ instead of 8’ long, to cover more such eventualities. And good news for gamers: the Logitech Hub does Bluetooth -- you no longer need an adapter to control your Sony PlayStation.

Logitech has revised its menus for the Harmony Ultimate, and I found them quite logical. Tap the Home icon to get a list of your Activities. When you click an Activity to open it, a screen appears telling you that you’re being connected to that Activity. The first time you open that Activity, the remote will ask if everything has turned on in the proper way. If not, it will guide you in making corrections. The next time you open that Activity, you’ll get your opening screen, which you can tailor to your taste. The first page of my Digital Music Activity includes the commands for next track, previous track, home, and favorites; I scroll down to get the other commands. I mostly use only next and previous track, which is why I put them at the top -- you can tailor the Ultimate almost entirely to your taste and needs. I never record, so I reassigned the Record button to Eject in all Activities involving a DVD or BD player. I also tweaked the system so that when I open an Activity that includes DVD or BD, the drawer of the appropriate player pops open.

Back to that opening screen. At the very top, tiny dots represent the total number of pages in the Activity selected. In this Activity I have one more page, which I call up by swiping to the left: a numeric keypad, which is important for scrolling on the Squeezebox Touch. If you’re in a TV mode, you can set up 50 favorite channels, and tap the Star icon to see them. Each channel is automatically supplied with an icon to make it instantly recognizable. When I want to switch to, say, MTV to watch Teen Wolf, all I have to do is tap the MTV icon -- no entering of channel numbers at all. 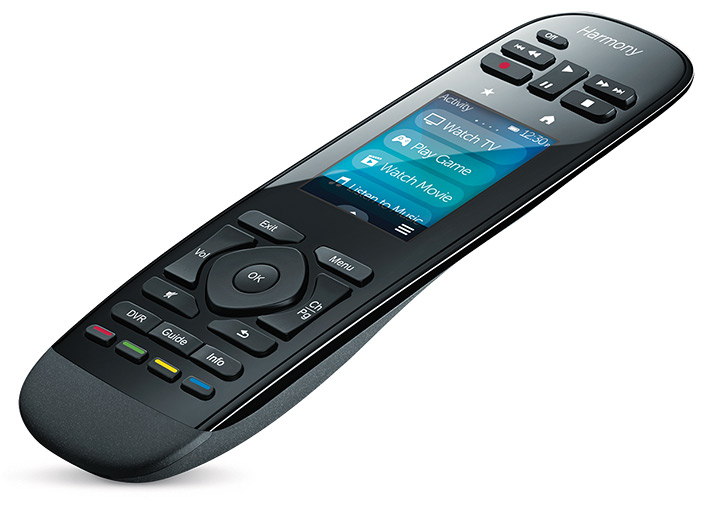 There’s no dedicated Help button. Instead, you tap an icon, which brings up Help, Fix It Myself, Devices, Settings, and Sleep Timer. Under Help you’ll find the familiar Logitech directions, and under Fix It Myself is a list of the devices being used. Tap one and go from there. Devices gives you a list of devices, as you’d expect. Tap one to get a list of all the keys and functions available for it. Settings gives you the ability to input and change settings for the remote, Activities, and devices. There’s even a Sync Remote listing, as well a Settings Lock so you can save your settings.

One welcome improvement over the Touch is the Ultimate’s tilt sensor, which instantly wakes the remote when it’s picked up. With older Harmony remotes that had this feature, the screen could hiccup and stutter, flashing on and off several times before settling for on (if you were lucky). Not so with the Ultimate -- the screen lit up without a hitch every time I picked it up. You can set the length of time you want it to stay lit, from 1 to 30 seconds. And if for some reason you don’t want the tilt sensor, you can turn it off.

The Logitech Ultimate remote has a screen for gestures, too. I don’t find these very useful, but some might, and they’re there. You could, for instance, set swipes to control volume, or anything you wanted to control with a swipe up, down, or to the side.

You can also set the icons for each Activity, and the background screen and color. The Ultimate is set to control Philips Wi-Fi-controlled Hue Lights, a feature I was unable to try. And it has a soft buzz to accompany your screen taps, so you can be sure your commands have registered. This can be set for Classic buzz, Quick buzz, Soft buzz (the factory setting), or Combo buzz.

If you can get used to the four buttons above its display, the Logitech Harmony Ultimate remote control pretty much lives up to its name: It controls the functions of all your devices so you can put their original remotes in a drawer and forget them. You can customize the commands to suit your needs. The tilt sensor wakes the Ultimate at your touch, and the Settings Lock is a useful feature. The Harmony Hub controls gaming devices with Bluetooth transmission, and settings can be tweaked and changed from the Ultimate without having to plug it into a computer. It’s expensive, but if you already have a Harmony Touch, you can just buy a Hub -- or, for much less money, the Harmony Smart Control Bundle, which gives you a simplified remote and the Harmony Hub as well as a Mini Blaster, a USB cable, and an AC adapter -- you supply a smartphone or iPod Touch to use as the main remote control. You can adjust the Ultimate as new situations or new equipment come along. There’s a lot more to like than not.

But perhaps the Ultimate still isn’t quite ultimate -- it lacks voice command. Some TVs already have that, but I don’t see why a remote can’t as well. You’d just say, “TV, SyFy channel,” and the remote would make it happen. But until such remotes appear, the Logitech Harmony Ultimate fills the bill quite nicely.