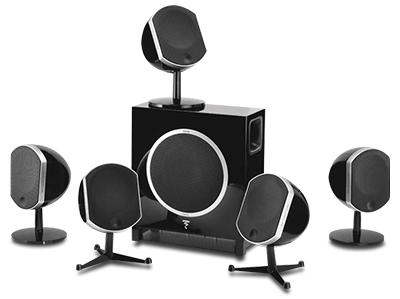 One of the equipment reviewer’s jobs is to take gear to extremes: punish it with challenges to see how it performs. So for home-theater speaker systems, we haul out the bad boys of modern film, the action epics with combustible special sound effects, dominant soundtracks, and enough explosions to make Krakatoa seem like a stroll in a sylvan glade. But once in a while you have to remember that most folks have only one system, which also has to play music -- arguably, a more demanding test of any speaker or system. For this review of one of Focal’s Pack 5.1 systems -- this one comprising five Bird satellites and one Sub Air subwoofer -- we’ve split the difference with a couple of movies about music. We’ll see if the Focal system can lift both weights with equal ease.

Focal offers six different 5.1 Pack combinations of the three Bird models and two subwoofer models, the Cub3 and the Sub Air. The system reviewed here comprises five Birds with pole-and-“tulipe” stands, and a Sub Air, for a total cost of $1399 USD. Each Bird measures 6”W x 7.5”H x 6.25”D, and has a rounded, sealed enclosure of cast plastic in black or white, its baffle entirely covered with a nonremovable, acoustically inert metal grille. Think of a very large egg, sliced in half and trimmed on either side. (Better still, take a look at the photos.) The Sub Air’s front-firing driver with 8” cellulose-pulp cone is enclosed in a high-gloss black box measuring 16.1”H x 14.2”W x 6.3”D, with a 3.25”-square port at the top of the right side panel. As in the Bird, the driver is covered by an acoustically inert metal grille. The Sub Air has a built-in 150W BASH amplifier, with controls for phase adjustment and crossover, and offers a choice between wired LFE input and wireless connection via 2.4GHz Wi-Fi. It weighs all of 17 pounds.

Focal’s recommendations underscore the varying approaches you can take in positioning front and surround speakers. It’s well established that front-channel/stereo speakers can be aimed straight into the room or slightly toed in. You then fiddle with toe-in to find the angle at which the stereo image snaps into place.

Surround speakers are another matter. We’ve had manufacturers recommend firing them straight into the room at right angles to the lateral listening line. Others would have you aim them straight down the line right at the listening position -- or in the case of the Focals, aimed from a considerable angle slightly to the rear of the listening position. I expect that fiddling around with the positions of the surround speakers may soon be as critical as the front-speaker positions. This is because of the tendency of today’s film-sound engineers to pack tons of sound into the surrounds including the inevitable “Look out, it’s behind you!” effects.

After a bit of fiddling, I positioned the Birds where Focal suggested because, well, that’s what we do when testing gear -- you owe it to the manufacturer to test their equipment under the conditions they recommend. But don’t forget to fiddle around. You may be surprised at the difference in sound quality after you’ve changed the placement.

I tuned the array with my Onkyo TX-NR808 A/V receiver’s onboard Audyssey room-optimization software, and verified it with the Onkyo’s pink-noise generator and a RadioShack digital SPL meter. I connected the Sub Air first with the dedicated LFE input, then switched to the Wi-Fi transmitter. I heard no difference in the signals, and so used Wi-Fi for the rest of the audition. Since the Sub Air was placed only 7’ from the amplifier, a wired run presented no problem. However, if you place the sub in a unique location, or if you mount it on a wall, or if your amplifier is installed in a hidden cabinet, then the wireless connection may be your best and only choice. We have two Wi-Fi networks Chez Ancienne, both running on the standard 2.4GHz band, and I didn’t notice any interference with the sub’s signal.

Director Tom Hanks’s love poem to the music that woke up his adolescence, That Thing You Do!, is a marvelous tale of a band’s unexpected rise to the top and their predictable fall, all on the back of one incredibly catchy pop tune. The story traces Erie, Pennsylvania’s the Oneders, a name eventually changed to the Wonders after one hilarious mispronunciation after another, as Jimmy Mattingly’s (Johnathon Schaech) jangly, proto-Merseyside original, “That Thing You Do!,” morphs from basement ballad to fair-circuit rave-up to Billboard hit, carrying the band to Hollywood stardom and an inability to survive the pressure. All the pop-band clichés are here: the sexy lead singer (Schaech), the laconic ladies’-man drummer (Tom Everett Scott), the flashy lead guitarist (Steve Zahn), the literally nameless bass player (Ethan Embry).

The soundtrack jumps from garage practices to family-restaurant gigs to the fair circuit, and finally to an abortive date in a proper recording studio. There is a limitation to the live sound one would hear at any live venue vs. something studio-produced. The Focal Pack portrayed the limitations of each venue with unerring accuracy. In the various concert sequences, the music is meant to sound live, so instrumental integrity is paramount. Scott’s drums, Zahn’s guitar, and Embry’s hesitant bass all find their spaces in the soundtrack. During the Wonders’ first recording session, in a church (chapter 9), when something roars by outside, the sound swirled up and behind me as if the surround speakers had been placed high on a wall or in the ceiling. When the song first hits the airwaves (chapter 13), the sound gradually builds from a transistor radio to an old console radio to filling the entire room. The Focal Pack responded with fluid efficiency, passing the sound effortlessly from tin-in-an-ear-plug to a panoramic vista of teen dreams come true, rendering each turn with spot-on authenticity. 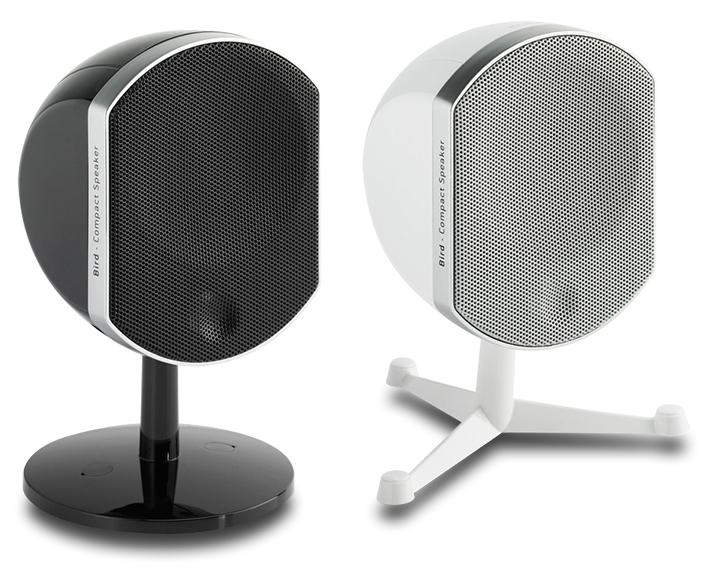 David Chase’s Not Fade Away deals with a garage band, the Twylight Zones, from a nameless New Jersey suburb, as it struggles with its own identity and the social turbulence of the late 1960s. This band is a bit more authentic than the Wonders, with John Magaro as drummer-turned-singer heartthrob Doug Damiano, lead guitarist and cover-band maven Gene Gaunt (Jack Huston), and the disruptive rat (“Dude, your girlfriend used to do me”) and resident contrarian guitarist Wells (Will Brill). This first feature film directed by Chase, following his successful run as creator and executive producer of The Sopranos, is uneven as it shifts from the band’s problems to familial conflict (the late James Gandolfini plays Doug’s father with a deft, nuanced touch) to a mushy romance to a clichéd culture clash during the Vietnam conflict -- a latter-day Saturday Night Fever, if you will.

The music, however, tells the band’s real story as it lurches from style to style in a stumbling attempt to forge an identity. Ironically, for a self-professed paean to a subculture fueled by rock’n’roll, the Twylight Zones play only five songs in the entire two-hour movie. Their first attempt, “Bo Diddley,” in Doug’s basement (chapter 2), sounds exactly like a new band trying to sound like a band -- replete with the bass player futilely trying to keep up with the two chord changes. At a house party (chapter 4), they play the Rolling Stones’ “Time Is On My Side” -- aside from Magaro cranking out a soulful rendition, the bass guitar takes over the front of the soundstage, and the Sub Air powered into action. For a subwoofer of modest size it thumped marvelously, holding down that righteous bottom end. In the Zones’ first venture into a recording studio (chapter 7), Magaro croons the Young Rascals’ “I Ain’t Gonna Eat Out My Heart Anymore” as the studio playback explodes into the listening space, a marvelous transition that the Focal Pack delivered easily. At a school dance (chapter 10), the band churns through Johnny Burnette’s version of “Train Kept A Rollin’,” as Huston’s slide-guitar break blisters the screen. Once again, it’s a live date that felt like a live date through the Focal Pack. By now the band is a full-fledged Dylan-cum-Byrds outfit, and stretches out on Doug’s original “St. Valentine’s Day Massacre” in a long-sought audition before a proper promoter (chapter 13). Once again, although their chops have matured considerably, the band sounds as any small group would in a rehearsal space -- another plus for the Focal Pack’s ability to reproduce the sound as it was intended to be heard. 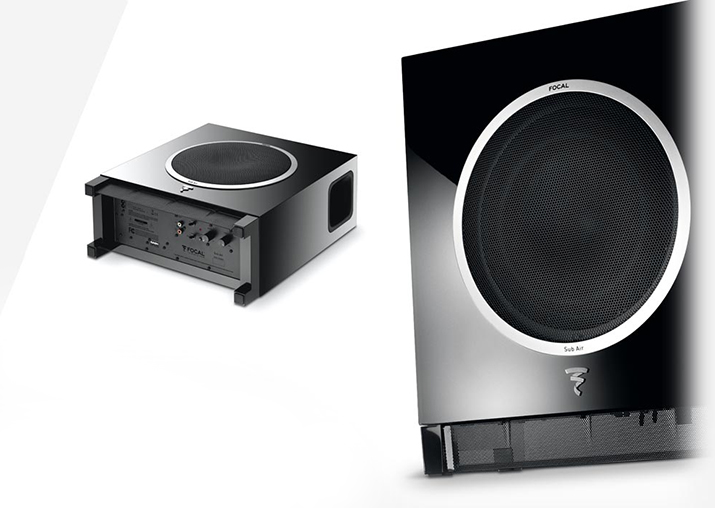 I had mixed results when listening to music-only recordings. CDs sounded thin, lacking transparency and depth. Older discs, like Marti Jones’s Any Kind of Lie (RCA 2040-2-R), were flat and lifeless. Jones’s supple alto floated like a disembodied spirit, and the precision percussion in “Second Choice” lacked punch. Newer releases, like Boy and Bear’s Moonfire (Island 2777355), had more resolution on the voices at the expense of sparse support of the instruments. Dialing in help with Dolby Pro Logic IIx provided little relief.

However, one of the things we’ve learned over the past several years is how the makers of home-theater speakers tune them for various sound formats, such as MP3. Regardless of the medium, DVD or Blu-ray, movie sound is rendered by a compression algorithm like Dolby Digital or DTS. It would make some measure of sense, then, that through the Focal Pack, compressed audio would sound more fully resolved than something at full bandwidth. The Internet station Radio Paradise, in this instance streamed over a Roku digital video player, features MP3s custom-encoded at 192kbps by the station’s founder, DJ, and engineer, Bill Goldsmith, a veteran audio professional. Goldsmith asserts that his codec is fundamentally superior to those used in garden-variety MP3s because of the care he takes in the process. Indeed, with many recordings I have difficulty telling the difference between his version and the uncompressed CD. All of this is to say that Radio Paradise sounded great through the Focal 5.1 Pack.

The Focal 5.1 Pack Bird and Sub Air handled cinema sound extremely well and without problems. I most appreciated their musical capabilities with MP3s and similarly compressed sound sources. Indeed, if you’re one of the new breed who’ve given up tactile media for Internet downloads, you should have no complaint about the Focal Pack’s musicality. If all you have room for is one system, and you listen to Internet Radio and watch DVDs and Blu-rays, the Focal Pack could very well be the system that will satisfy all your needs at a reasonable price.