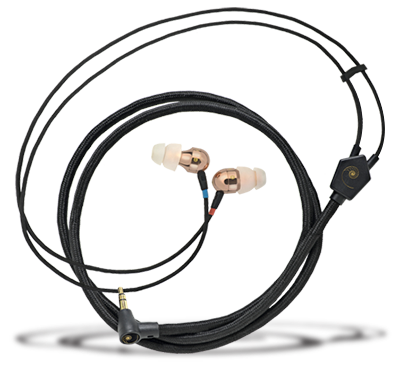 As soon as I laid eyes on Cardas Audio’s new EM5813 Model 1 Ear Speakers, at T.H.E. Show Newport Beach ’13 this past May, I knew I was in for something special. Cardas’s VP of marketing and sales, Andy Regan, pulled me out into the hall, where he’d set up a demo table outside the Audio Element room, handed me the weighty earbuds, and told me to plug them into my ears and iPhone. I did and, according to report, let out a joyous “Fucking cool!” I can’t remember what track I played, but the sound was gorgeous. I insisted on a review pair on the spot. I had to have them.

Aside from their sound, my immediate impression of the EM5813s ($425 USD) was of how they looked and felt -- the attractive reddish copper color of the metal shells and their seriously solid feel. Made from copper alloy in the attractive shape of a tiny Etruscan urn, the shells strike strong visual notes of density, richness, and craftsmanship. And when they knock together in the hand, I hear a damped, mellow click like billiard balls in quick, precise collision.

My second impression had to do with the fabulously thick cable -- almost a hose, compared to the flimsy wires of other earphones. Sheathed in a nondescript black mesh, the EM5813’s cable is Cardas Clear Light headphone cable, a miniature version of Cardas Clear. No shitting around here.

Dissatisfied with the sound of existing earphones, George Cardas worked on the EM5813s for four years, trying out various designs and materials. From the ground up, he designed things according to his own principles, rejecting the Mylar drivers used in most other dynamic in-ear ’phones. He experimented until he found a superthin polyethylene naphthalate diaphragm from Japan, then designed his own drivers out of it. He also incorporated new information on magnetics and metallurgy, ordering components manufactured in Oregon, California, and the People’s Republic of China. Custom alloys came from Italy, Germany, and the US, and magnets from China. 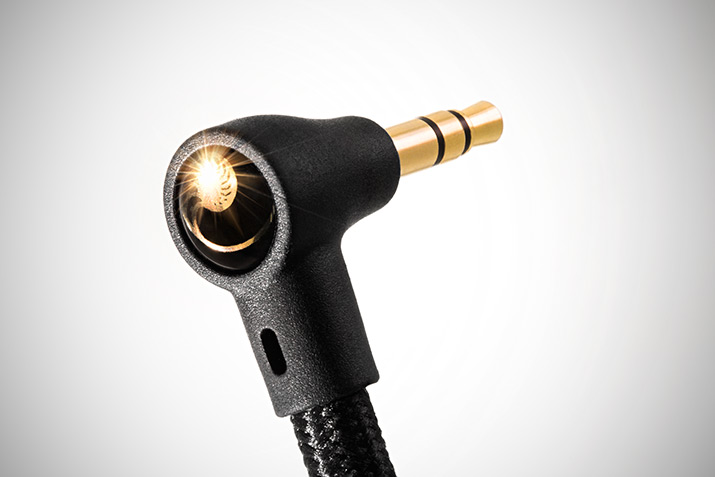 Using the EM5813s was straightforward. The gold-plated, right-angled miniplug worked easily with my iPhone 5 and an Astell&Kern AK120 portable music player (in for review). It fit easily, reaching through the iPhone’s aftermarket plastic case from Speck and the AK120’s custom leather one. I have to confess, though, that for the sake of comfort I replaced the Cardas stock plastic eartips with aftermarket foam tips. The Cardas tips, both the white and blue ones, sealed well and sounded great, but the skin inside my ear canals couldn’t breathe, and I felt uncomfortable whenever I used them for extended periods. So I ordered an assortment of Comply T-400 foam tips from Amazon and found the Medium size to work perfectly well, with little or no noticeable degradation in sound quality.

A few notes: The EM5813s’ small, snap-mouth leather carrying pouch, tanned a dark brown, with the Cardas logo stamped in gold on one side, is not only too small for the rolled-up cable, making for an all too tight and awkward fit, but . . . it also sheds little black leather flakes from its inside, detracting from this product’s otherwise luxurious character. Also, the thick cable could be ergonomically awkward. At 5’, it’s a foot longer than the norm, and as I walked around it flopped heavily against my pant leg, like a long watch chain. I took to looping the excess around my neck for easier passage through the world. 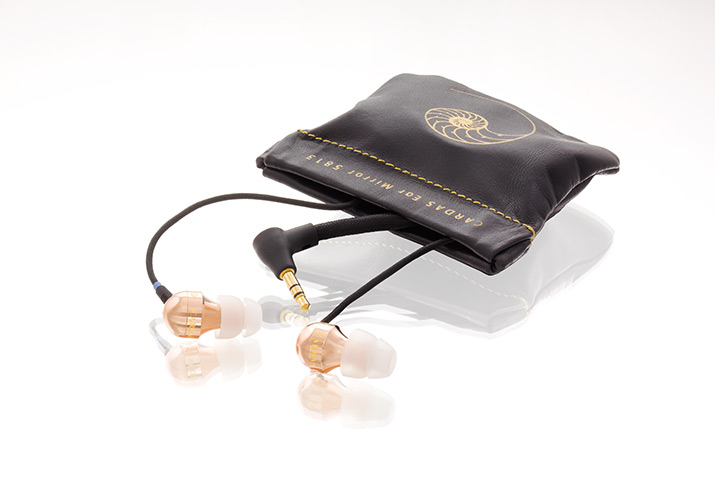 I used the EM5813s on my return flight from T.H.E. Show Newport Beach ’13, for fun over a couple of weeks around the house, and then extensively throughout a three-week trip to Prague, in the Czech Republic, this past July. I listened on subways and trams, late at night in my rented Vinohrady apartment, and on the long mid-leg plane rides between San Francisco and Frankfurt. Finally, I took them with me on my mountain writing retreat in August. The Cardases never failed, never delivering anything but wondrous, pleasing sound. From the get, they sounded great with all genres of music. I played jazz, rock, and all sorts of classical, from opera to orchestral, baroque to piano trios. In each case, the Cardas ’phones just lit me up.

For example, listening to Dexter Gordon’s tenor sax in “Darn that Dream,” from his Ballads (16-bit/44.1kHz ALAC, Blue Note) through the Astell&Kern AK120, I could hear not only the fatness of his big, ballad style, but the embouchure that produced the mid-speed vibrato he’d developed to distinguish himself from predecessors like Ben Webster and Lester Young. This vibrato gave the sound of Gordon’s high notes that signature pleasing zip, his midrange a slight edge to any sweetness, all easily heard via the EM5813s. With chamber music, such as the Tokyo String Quartet’s recording of the first movement of Beethoven’s String Quartet No.7 in F, Op.59 No.1, the “Razumovsky” (16/44.1 ALAC, Harmonia Mundi), the string sounds were precisely rendered -- the cello, viola, and violins were each distinct. With these ’phones, I could easily distinguish and revel in the varied timbral qualities of all sorts of instruments and playing styles. 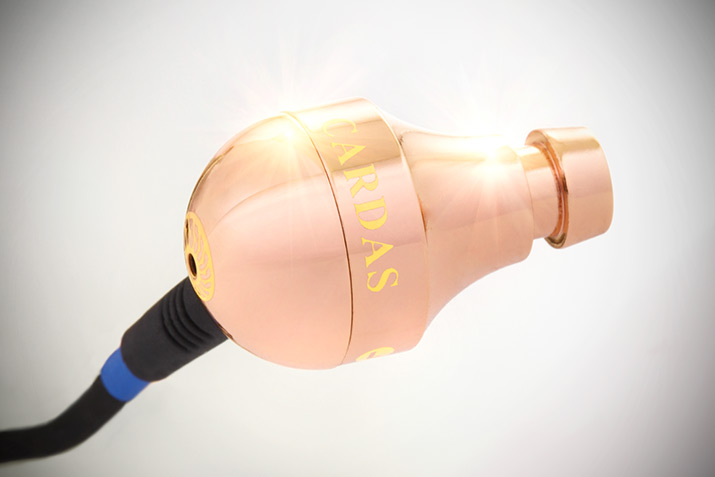 Like instruments, solo voices had both presence and detail, even via my iPhone 5. No voice is as distinctive as Louis Armstrong’s, especially in “St. James Infirmary Blues,” from Satchmo Plays King Oliver (16/44.1 ALAC, Varese Sarabande). His froggy timbre demonstrated that famed mellow grit of his. Even MP3s sounded pretty good -- Lake Street Dive’s cover of “This Magic Moment” (from Fun Machine, 16/44.1 ALAC, iTunes) was sweeter than wine, to borrow a phrase. The Cardas ’phones caught all of singer Rachael Price’s sinuously soulful phrasings of the incomparably cheesy lyrics of this ’60s pop tune.

Through the AK120 again, the depth of sound was another great characteristic, and not only regarding the sense of a soundstage (which the Cardases could indeed reproduce, depending on the recording), but of space and a natural sense of timing in acoustic performances. In “Dos Gardenias Para Tí,” from Buena Vista Social Club (16/44.1 ALAC, Nonesuch), as Ibrahim Ferrer’s slightly gritty voice took up a forward position midstage, I could hear Manuel Mirabal’s muted trumpet and Ry Cooder’s slinky slide guitar from the far rear, while the piano and congas took up space just behind the singer.

FLAC files via the AK120 fared even better. In Introitus from Mozart’s Requiem, as performed by the Netherlands Bach Society Baroque Orchestra led by Jos van Veldhoven (24/192 FLAC, Channel Classics), the choir’s sopranos, altos, tenors, and basses inhabited an ethereal zone spread behind and above the orchestra’s period instruments. I could hear the layerings as well: altos above left, sopranos above them, tenors and basses poking out here and there from spots at the middle rear. The EM5813s rendered both a richness of orchestral sound and the alternating airiness and authority of the choir. Never did a soprano’s voice sound piercing, overwhelming the range of these ’phones. Trebles were open, sweet, and clear. 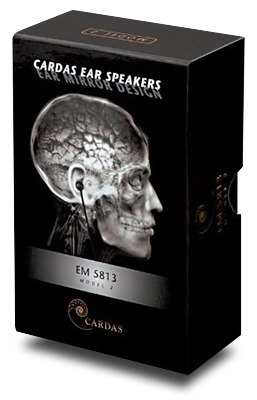 And bass? Well, there was both richness and slam. In Lacrimosa, from the same FLAC file of Mozart’s Requiem, the double basses laid out a warm, resonant foundation, pulsing underneath the angelic sounds of the choir and violins. The timpani had wallop, punctuating the score with subtle gravitas. But audiophiliac “slam” was best felt in tracks like “I Still Haven’t Found What I’m Looking For,” from U2’s The Joshua Tree (16/44.1 ALAC, Island). The chopping drive of the Edge’s electric guitar strumming, Larry Mullen Jr.’s rolling and beating toms, and Adam Clayton’s rumbling electric bass under Bono’s soaring voice, all created a pulsating sonic wall -- powerful, rhythmic, and suitable for trance or head-banging.

Up till now, I haven’t been much of an earphone user, such listening confined mainly to airplane trips and a few minutes on the bus, or in my office at the university while waiting for students to show up. I think this was partly due to the modicum level of fidelity I got from the Monster Turbine High Performance in-ear ’phones ($169.95) I’d been using. I’d picked them up a few years ago in a San Francisco airport on a trip through there and been impressed by them -- they easily bested the iPhone’s stock earbuds in both comfort and sound quality.

But with the Cardas EM5813 Model 1 ’phones as my new standard, I find myself listening a lot more -- I wore them on wandering strolls through the streets of Prague, and on the subway commute from my apartment to Charles University. Terrific on the plane both ways, the EM5813s are in another league entirely from the Turbines, providing me with portable sound on a level that satisfies my audiophiliac need for clarity, depth, speed, great bass, and real richness. I don’t feel deprived when I’m listening to them -- quite the opposite. Instead, they’re another means of serious listening. And at $425 retail, they’re a definite no-brainer. Get them. They’re fabulous!