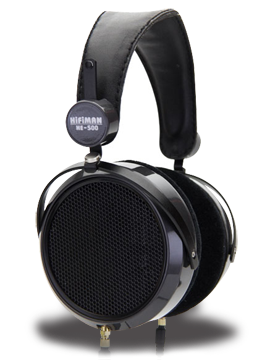 HiFiMAN is the creation of Fang Bian, a headphone enthusiast with the knowledge and contacts to turn his enthusiasm into commercialized products. His firm designs, manufactures, and distributes high-end portable music players, headphone amplifiers, in-ear earphones, and full-sized headphones. The latest offering among his full-sized cans is the subject of this review: the HE-500 headphones ($899 USD).

The first thing that sets the HE-500s apart from the vast majority of headphones out there is that they’re a planar-magnetic (aka orthodynamic) design. In the typical dynamic headphone, the driver is attached to a voice-coil mounted in front of a magnet. In a planar-magnetic headphone, the driver is a thin membrane with a conductive layer that has been etched into a specific pattern, mounted in a nearly uniform magnetic field. There are two theoretical advantages to this latter arrangement. First, because the membrane can be lighter than a driver and voice-coil, it should be able to move faster. Second, the membrane is driven over its entire surface, which should reduce resonance modes and distortion. In most planar-magnetic headphones, including the HE-500s, the field is created by magnets placed on both sides of the membrane in a balanced configuration. Historically, planar-magnetic headphones -- and those from HiFiMAN in particular -- have been very hard to drive. The HE-500s are the most efficient design yet from HiFiMAN, with a claimed sensitivity of 89dB at 1mW. You probably won’t get a lot of volume or good control out of the average portable player, but any competent headphone amplifier should have no trouble getting the job done.

HiFiMAN might be a small company, but their headphones have the look of finished products from one of the major players, rather than something cobbled together in someone’s garage. No exotic materials are used, but the build quality seems robust, and the cloth-covered earpads are comfortable and breathe well. At 502gm, the HE-500s are rather on the heavy side, but their overall weight distribution and well-padded headband made them comfortable for me to wear for hours at a time. The clamping force is enough to keep them firmly in place, but I never felt as if my head were in a vise.

The HE-500s come in a nice, hard-sided travel/storage box with custom foam cutouts. The stout, 3m-long Y-cable is terminated in a 1/8" stereo plug with a 1/4" adapter. Not only is the cable detachable, it comes with an extra set of connectors so that those who wish to make their own cable upgrades don’t need to go hunting around for the proper ends. The package also includes one replacement earpad. 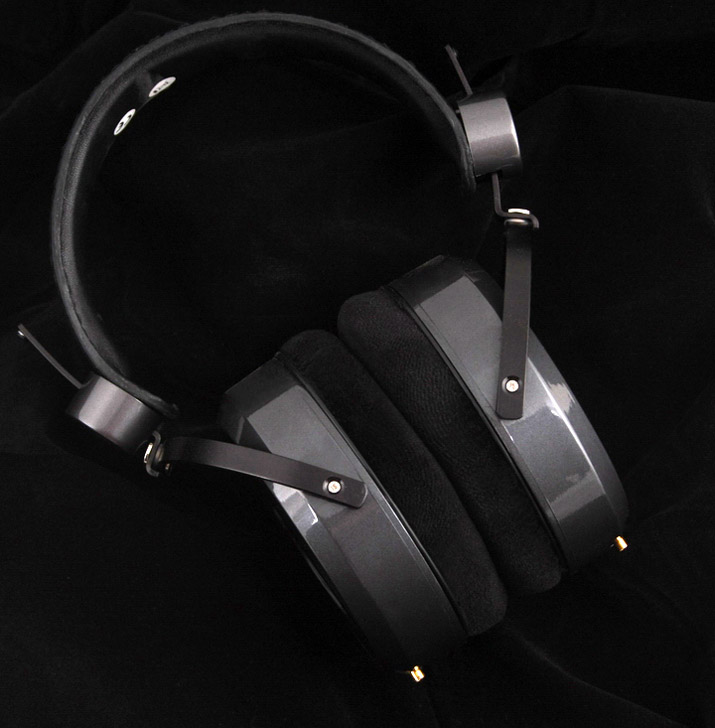 I usually have to spend a great deal of space in headphone reviews describing the product’s frequency response, because most headphone responses deviate greatly from what I’m used to hearing from flat-measuring loudspeakers. The HE-500s save me a lot of that trouble: They were pretty close to subjectively flat. There was a slight dip in the presence region -- 2-5kHz or thereabouts -- that helped relieve the sense that the microphone feed was being pumped directly into my ear canals, but aside from that, I heard no major frequency-response anomalies. You should expect that from a headphone this expensive, but in my experience, you rarely get it.

The bass region was neither weak nor pumped-up. It’s roughly equivalent to the overall character of a pair of small floorstanding speakers in a good room. That sort of low end allowed the HE-500s to deliver the full weights of electric basses and bass drums, which should make them a particularly good choice for rock fans. In that vein, the current economic situation had me pulling out the Kinks’ Low Budget (SACD/CD, Velvel VEL-SC-79817), where I found songs such as "A Gallon of Gas" still apt more than 30 years after they were released. The HE-500s distinguished between the various kick drums used on different tracks of this album -- some were tighter and faster, others a little looser, with a bit more depth -- but I still found most of the drive and percussive energy to come from the snare and toms.

The HE-500s’ excellent bass articulation also meant that they could follow the many funk-infused bass lines in Ola Onabule’s Seven Shades Lighter (24/48 FLAC, Real World Studios/Society of Sound). (The album is brand-new, but its style and instrumentation make it sound as if it came straight out of the late 1970s.) I think most listeners will be satisfied by the HE-500s’ low-end performance -- I was -- but some may still want a little more weight and punch. My reference headphone amplifier, the Grace Design m902, measures very linearly, and should be able to deliver the voltage swings and current to drive pretty much any headphone out there, but I did find that HeadRoom’s Balanced Ultra Desktop Amplifier, when I reviewed it a few months ago, increased both the quantity and palpability of the bass reproduction of every headphone I tried. For those who wish a little more bass output, the HE-500s and BUDA would make an excellent combination.

The HE-500s’ midrange was neither forward nor recessed, and voices were free from any overt colorations. Listening to Alison Krauss and Union Station’s Paper Airplane (24/96 FLAC, Rounder/HDtracks), I could clearly hear the greater foundation Krauss’s voice now has compared to the wispy, ethereal quality it had in her early years. Dan Tyminski, another member of Union Station, also has a very distinctive voice, but the HE-500s neither covered up nor overemphasized its nasality. Continuing with Paper Airplane, the HE-500s portrayed the transients of banjo and guitar picking with enough zippiness to make them sound fast, but not so much as to make them ragged or fatiguing over the long term.

A number of the headphones I’ve reviewed recently -- the Sennheiser HD 800s, the Audeze LCD-2s, and the models from Ultrasone -- employ various schemes that attempt to move the aural image out in front, to create an experience more akin to listening to loudspeakers. None of these approaches works perfectly, but all managed to create a greater sense of space than the average pair of headphones. The HE-500s imaged more like traditional ’phones: The whole soundscape wasn’t crammed inside my head, but was laid out from left to right through my head rather than in front of it. Longtime headphone listeners learn to accept such an arrangement, and the brain can compensate to a large degree, even giving recordings a good sense of depth. Some listeners may even prefer this perspective to some of the alternatives -- as in the HD 800s, for example, which can feel a bit too far away. Provided you’re willing to accept the paradigm of headphone sound, the HE-500s actually imaged very well, with good separation, specificity, and stability. The overall sound, however, was slightly more damped than I think is strictly accurate. Many listeners may not notice this characteristic, because a great many hi-fi setups, from the modestly priced to the very expensive, tend toward a damped sound. This approach heightens the sense of detail while somewhat reducing the natural decay of real instruments in a real space that the best recordings capture.

My listening diet is varied, and at least half of it is classical music. I appreciated the way the HE-500s reproduced the intimacy of chamber music while still providing the sense of scale necessary for larger orchestral works. What’s more, when a full orchestra was playing I could usually follow individual musical threads, as well as appreciate the way they came together as a whole. The HE-500s rendered instrumental timbres well enough that I never had any doubt which instrument was playing, but they sometimes had trouble discriminating between the sounds of two different violins or two different clarinets. I also found that fine details of texture -- such as the rasp of bow on string, or the vibration of the oboe’s reed in the Ensemble Rhapsody’s collection of Viennese Oboe Quartets (SACD/CD, ARS Produktion 38 070) -- were slightly smeared together. While I did notice these shortcomings of the HE-500s, most other headphones do even worse; they didn’t really detract from my overall musical enjoyment. 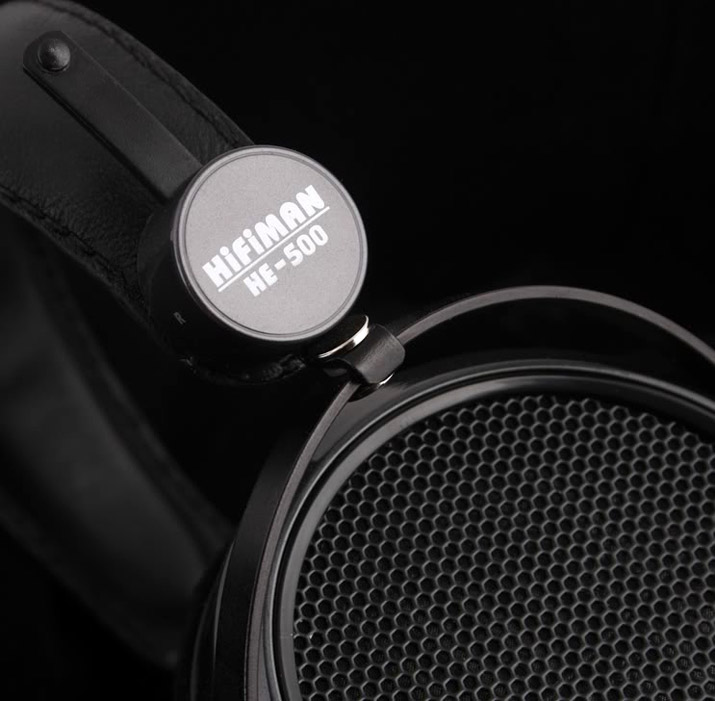 The HE-500’s obvious competitor is the Audeze LCD-2 ($945). Both are planar-magnetic designs, so you might expect them to sound similar. They didn’t, really. The LCD-2s made a big splash in the headphone market because they sounded radically different from anything else out there. Their sound is very warm, dense, and centered in the lower midrange. The LCD-2s are also forgiving of recordings that could be described as bright, hot, or harsh. The HE-500s didn’t exacerbate these problems, but they didn’t cover them up either. Of the two, the HiFiMANs are certainly the more neutrally balanced design -- but not all listeners seek a neutral tonal balance. While the HE-500s delivered an ambience that was slightly drier than accurate, the LCD-2s are slightly wetter than what I think is really on a given recording -- i.e., they create an extra sense of space and reverberance. I can’t say that one is better than the other; they’re different, and will appeal to listeners with different priorities.

Other interesting competitors of the HE-500s are the Ultrasone Pro 2900s ($599). After using them in my review of the HeadRoom BUDA, I purchased the review sample, which is the more expensive, balanced version. I then upgraded to a single-ended custom cable from Cardas, because that sounded slightly more detailed and had a sweeter top end than the balanced cable with adapter. It’s important to acknowledge these points, but I would still estimate the stock single-ended version to sound 95% the same as the balanced version. The Pro 2900s have an intensely present sound that is very much like listening to studio monitors in the nearfield. The Pro moniker is not a joke -- these headphones shine a spotlight into the deepest recesses of every recording to reveal a wealth of details that can be hidden by other headphones, such as the HE-500s. But that also means that every little defect in a recording is laid bare. An audio engineer might want that -- I sometimes find it helpful for reviewing purposes -- but it can be a bit much for listening to a wide variety of recordings done in a wide variety of qualities. The Pro 2900s don’t sound as big as the LCD-2s, but they do convey a better sense of the recording venue than did the HE-500s. The Ultrasones can also tell you about the placement of the recording microphones, or how a multitrack recording was mixed. All of that information is on the recording, but it’s information you may not always wish to hear. Again, comparing the Pro 2900s to the HE-500s became a question of different rather than better. The Pro 2900s will suit those who want to know exactly what’s on every recording; the HE-500s will better fit those who are more comfortable taking a step back.

The HiFiMAN HE-500 is a well-engineered and well-built headphone design. Their overall neutral tonal balance, satisfying but measured bass, and big sound make them well suited to a wide variety of musical styles. They can show off many of the virtues of good recordings, but don’t render less-than-stellar recordings unlistenable. Their somewhat low sensitivity will require a very good headphone output or dedicated headphone amplifier, but is not too demanding to be realistic. While no single headphone design -- or design of any other category of audio component -- will appeal to every listener, I think that the balanced approach of the HE-500s will help them find their way into many systems.