In 1991, Etymotic Research launched the first commercial earphone for music playback that was designed to be inserted in the ear canal. This created a whole new product category that goes by various names: in-ear headphones, canal phones, insert phones, etc. I prefer the widely used term in-ear monitors (IEMs). Whatever you call them, these types of earphones have a few basic characteristics. Insertion into the ear canal avoids many of the variations in outer-ear (pinna) shape and headphone positioning that can affect the perceived sound of normal headphones. Depending on the design of the eartip, IEMs can offer a significant amount of isolation from ambient noise, which allows for much lower and thus safer listening levels, as well as increased perception of details. Many IEMs are also highly efficient, so they can be adequately driven directly from the output of a portable audio device. Those characteristics, combined with their very small size, make IEMs an excellent choice for listening on the go.

From their extensive work with developing tools for audiologists, the engineers and scientists at Etymotic came up with a target curve that represents the ideal frequency response for earphones. They then tweaked that curve to account for the 5dB boost in the top octave on most CDs, and an equivalent 5dB cut that they found was characteristic of most professional studio monitor speakers. The result was the ER-4 S -- their first product, launched in 1991 and still available today. The only trouble with that original design was that its low sensitivity -- 0.1V for 90dB at 1kHz -- requires dedicated headphone amplification. In 1994, Etymotic introduced the ER-4P. It had a higher sensitivity -- 102dB at 0.1V -- and could therefore be driven directly from the output of almost any portable audio device.

Etymotic publishes what they call “accuracy scores” for all of their designs. These scores compare the earphones’ measured frequency response against a target curve. The ER-4 S has an accuracy score of 92%, whereas the ER-4P scores 86%, the difference primarily due to a 3dB increase in the bass frequencies for the latter model. Etymotic also claims to have measured many of their competitors’ products and found that they often deviate greatly from the Etymotic target curve. Of course, any such “accuracy score” needs to be taken with a grain of salt; there is little agreement among headphone manufacturers and researchers about how a headphone actually should measure. Still, whether or not Etymotic’s is really the best possible curve, it’s reassuring to see a rigorous engineering approach behind the design process.

Etymotic sent me for review their ER-4PT earphones ($299 USD), which are acoustically identical to the ER-4Ps but come with some extra accessories: a 1/8”-to-1/4” adapter, an airline adapter, and a hard case with foam cutouts for the various bits and pieces. They also sent along an ER-4P-24 adapter cable ($65), which converts the ER-4P’s impedance and frequency-response characteristics to those of the ER-4 S, and thus allows you to have two different earphones for only 20% more than the cost of one.

All Etymotic earphones come with a travel pouch, replacement filters that protect the balanced-armature drivers, a filter-changing tool, and three different sizes of silicone eartips to ensure proper bass response and good noise isolation -- with any IEM, the eartips must be inserted deep in the ear canal, for a good seal. Also included are two shapes of foam tips that sound nearly as good as the silicone tips but don’t need to be inserted nearly as deeply. Using either type of tip, I found the ER-4PTs extremely comfortable for very long listening sessions. They also come with a shirt clip, to prevent a tug on the cord from yanking the ’phones out of your ears. 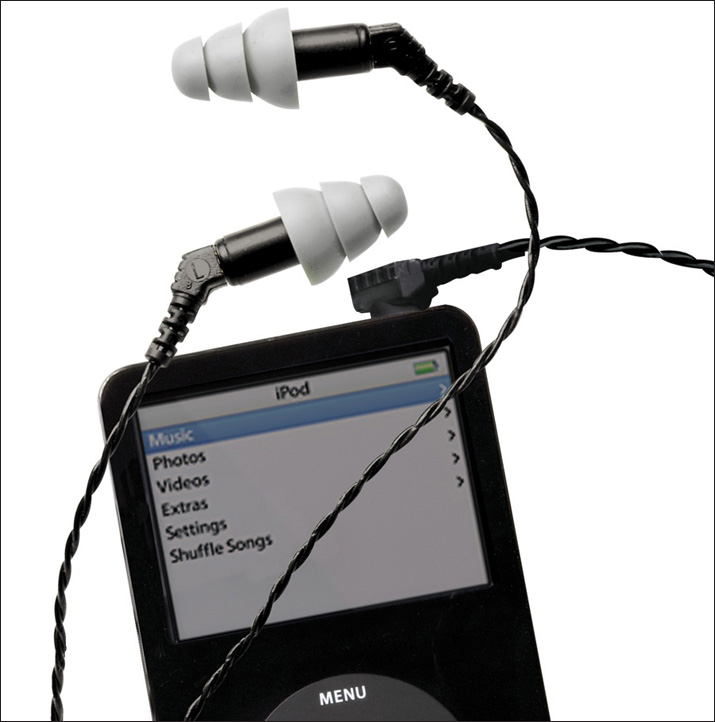 When I describe the frequency response of any earphones, I use as my reference the sound of flat-measuring loudspeakers in the midfield (6’ to 8’ away). The tonal center of the ER-4PTs is in the midrange. The midbass is slightly down in level, and the low bass is quite rolled off. Using test tones, I found that the frequency response diminished starting around 300Hz, and more rapidly below about 70Hz, though there was still audible output at 20Hz. As most devotees of minimonitor speakers will attest, those low-bass frequencies aren’t really essential for following what’s going on in the music -- even bass lines -- but their lack does reduce the sense of scale with some recordings. I understand that the ER-4PTs’ bass may measure flat, but that fails to take into account two things. First, speakers that measure flat in an anechoic chamber exhibit a slight boost in the bass and midbass when placed in a real room. Second, bass frequencies are felt through skin and bone conduction as well as being heard through the eardrums. A flat response from an IEM ignores that psychoacoustic phenomenon.

It’s important to keep my comments about the Etymotic ER-4PTs’ reduced bass in perspective. Many designers try to make up for earphones’ inability to provide that sort of bass sensation by going too far in the other direction. Typically, the result is overwhelming and indistinct mush that makes all bass instruments sound the same and bass notes run into each other. I would gladly choose, any time, the ER-4PTs’ slight reduction in bass and midbass energy over that alternative. Their sound was quick, clean, and articulate -- all qualities that I value highly.

As per Etymotic’s design criteria, the top octave is padded down, which compensates for the rather hot sound of most CDs while not quite conveying all of the harmonic texture, sparkle, and air of the best high-resolution recordings. Again, while my audiophile sensibilities tend toward unflinching accuracy, I think that the freedom from pain that results from this top-octave padding will better suit most listeners. The ER-4PTs certainly didn’t sound dull or muted, something that often happens when a design is intended to be forgiving.

How did all of this translate into music? The contours of the ER-4PTs’ frequency response put the emphasis squarely in the vocal range. That’s perfect for pop and rock recordings, because guitars are centered in that same frequency band. It was very easy to follow melodic lines and make out lyrics, even in the densest mix. The individual timbres of voices -- the distinct character that makes each unique -- were also exceptionally well preserved by the ER-4PTs. It’s easy to recognize when a human voice sounds right, but it’s amazing how many small earphones -- and even full-size headphones -- fail at this critical task. Bass drums and electric basses were a bit on the light side, but I still had no trouble picking out what they were doing down there. Some listeners may crave a little more impact, but the ER-4PTs kept up with the critical timing of these low-end instruments, which propel the music forward. I got similar good results when listening to small jazz ensembles. For those who gravitate toward classical music, the ER-4PTs prioritized the violins and upper woodwinds. Cellos and double basses were a little down in level, but still nicely separated.

What I was not prepared for was the ER-4PTs’ ability to convey a sense of space, when the recording contained such information. As with most earphones, the sound was entirely within the confines of my cranium, but the ER-4PTs managed to turn my skull into a recording studio or concert hall -- whichever was on the album. I could easily close my eyes and be transported to the venue in which the recording had been made. It was uncanny the way the ER-4PTs could represent both the spread from left to right and a measure of the sense of depth. That’s something I’ve never experienced from IEMs before, and wouldn’t have thought possible if I hadn’t heard it for myself.

From the description on Etymotic’s website, I didn’t expect a great deal of difference in the sound of the ER-4PTs from inserting the adapter cable -- just a slight reduction in the bass frequencies. I did hear that, but it wasn’t the only difference I heard. First, I had to increase the volume setting of my Grace Design m902 headphone amplifier considerably to account for the difference in sensitivity. The m902 has a useful digital display; I found that I needed to increase the volume by about 13dB to achieve the same, subjective volume level I heard without the ER-P-24 cable. (The cable’s specifications suggest a 12dB difference at 1kHz, which is close enough to make me feel good about my ability to judge volume levels.) Instruments and voices seemed to be brought a little forward and into better focus. Though the bass frequencies were reduced in level, the midbass articulation was improved. That made bass drums slightly punchier, and allowed me to follow bass lines even more easily. With the adapter cable inserted, the ER-4PT -- now equivalent to the ER-4 S -- really did take on the sound of studio monitors in the nearfield. The low bass and the top octave were still down in level compared to strict neutrality, but everything in between was spot on. While some listeners may prefer the added bass and slightly softer sound of the ER-4PTs on their own, I usually liked them better with the adapter inserted.

I recently reviewed the Etymotic hf5 earphones ($149). That design is based on the ER-4P, but is assembled as a complete unit in China rather than having the balanced-armature drivers hand-matched and assembled at Etymotic’s headquarters, in Illinois. Unsurprisingly, I found the overall sounds of the hf5s and ER-4PTs to be very similar. That doesn’t mean they sounded the same. The ER-4PTs were significantly more detailed than the hf5s, rendering all of the texture of a singer’s voice or of a bow drawn across violin strings, while the hf5s tended to smear such subtleties together. It was probably that superior detail retrieval, along with the careful driver matching between channels, that made the ER-4PTs able to convey the spatial relationships of voices and instruments; the hf5s flattened the soundstage a bit.

In the conclusion of my hf5 review, I wrote, “In those noisy environments with the limitations of a portable player, it’s hard to justify the need for going beyond this already high level of performance.” I hold to that opinion, but if you’re going to be using your earphones with high-quality sources, or in an environment where sound isolation is a bonus rather than an absolute necessity, you’ll likely appreciate the greater detail and refinement of the ER-4PTs over the hf5s. The ER-4PTs cost about twice as much; are they twice as good? Such finer details are what generally separate audiophile from mass-market equipment, so yes: I think the ER-4PTs are twice as good.

Although the unique features of in-ear monitors have made them my choice in many listening situations, I have always viewed that choice as a compromise. No longer. The Etymotic Research ER-4PT earphones -- and, even more, the ER-4 S model -- provide reference-quality sound in a vanishingly small package. Their level of transparency of detail is beyond what I thought possible from this type of device. They really are like having studio monitors that you can take with you wherever you go. Very highly recommended.