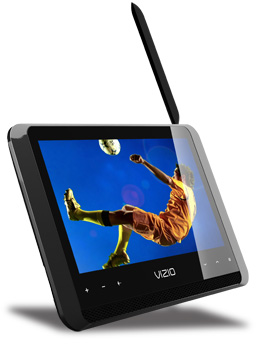 In the face of smart phones, iPods, and iPads, few companies these days are making portable TVs. Vizio has tried to make their offering seem like a more contemporary product by using a backlit LED display and adding at least a couple of bells and whistles, but the facts remain: The VMB070 doesn’t connect to the Internet, it has limited adjustments, and its design seems to have been focused more on style than on use. It does, however, receive over-the-air digital high-definition signals at resolutions of 780p and 1080i.

What’s in the box

Included with the VMB070 ($159.99 USD) are an instruction manual, a remote control, an AC charging cord, a composite-video cable, an RF adapter to permit connection to a cable box or an external antenna, and a soft carrying case.

The VMB070 itself measures 7 1/2”W by 4 7/8”H x 3/4”D and weighs just over a pound. Its fold-out easel stand clicks firmly into place and, when extended, extends the overall depth to about 3.” Its 7”-diagonal screen is 6”W x 3.5”H. The VMB070 is smooth and sleek, much like a tablet. The only controls visible at first glance are a power switch on the top, and power and headphone jacks discreetly tucked away on the side. Lift the antenna -- it swings out to the side -- to find the RF adapter, USB, and A/V input jacks and the master On/Off switch.

The remote control is surprisingly large and old-fashioned at 5 1/4”L x 1 3/4”W x 1/4”D. One wonders why a remote is included at all -- the VMB070 has a limited touchscreen (see below), and is so small that it’s unlikely to be viewed from any distance that would require remote control.

The first thing you do is plug in the VMB070’s power adapter cord and charge its battery. If you want to conserve battery power, you then need to power up the VMB070 using the master On/Off switch hidden under the antenna. Then you can turn it on with the exposed power switch on top. Here the user encounters the first of many things that make the VMB070 fairly user-unfriendly: This switch looks like a simple push-release button, but you have to keep it depressed until the VMB070 turns on, then do the same thing to turn it off.

Then you select the input: Antenna, RF, AV, or JPEG. In addition to a choice of inputs, the setup menu lets you set a sleep timer, engage closed-captioning, and adjust the video settings. The video settings include Screen Mode, Picture Settings, Tuner Settings, Parental Controls, Menu Language, Time and Local Settings, Reset, and Setup Wizard. Most of these have submenus; click Picture Settings and you’re presented with another menu that offers Picture Mode, Backlight, Brightness, Contrast, Color, and Sharpness.

And now the touchscreen’s limitations become evident: The display itself is not touch-sensitive at all. Touchscreen functions are available only on the small strip below the display: virtual buttons for Menu, Left, Right, Up, Down, and OK. If you want to adjust the picture color, tap Menu, then Right to go to Settings, then OK again, then Up/Down to select Picture, then OK, then Up/Down again to select Picture Settings, then OK, then Up/Down once more to select Color -- and, finally, OK. Users of the Apple iPod, iTouch, iPhone, and iPad will be driven crazy. There’s no way to tap a function directly, even though functions are displayed on a screen that looks touch-sensitive. Perhaps my iTouch has spoiled me, but the portion of the Vizio’s display that was actually a touchscreen was the slowest, most erratic I’ve ever used. 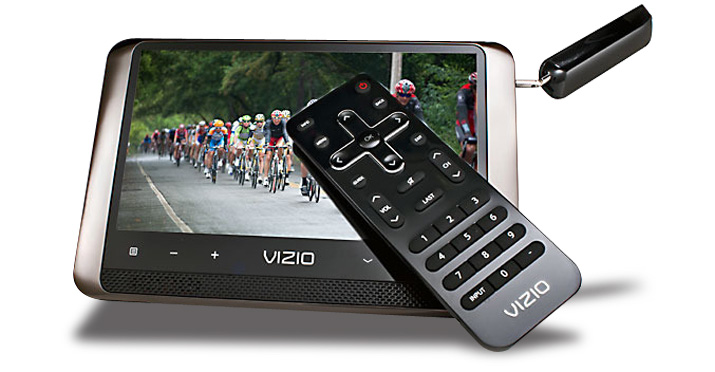 I first tried to tune in OTA HDTV broadcasts. The VMB070 will automatically tune in and store all local channels that can be received. I live halfway up a mountain, in a sort of TV black hole -- cable is required for regular viewing -- so I was surprised to see the Vizio tune in three stations from Hagerstown, Maryland, some 40 miles away. However, the lock wasn’t reliable. With uncertain digital reception, you don’t get snow or fading, you get pixelation or complete loss of signal. I had better luck when I took the set down in the valley, closer to Hagerstown, but I still couldn’t get a steady picture for any length of time. Oddly enough, when I took the set down the other side of the mountain, to a Virginia valley well within reception range of stations from Washington, DC, I couldn’t snag even one. This aspect of the VMB070’s performance will of course depend on the region in which it’s used; I suggest that you hold on to your sales receipt until you’re sure the Vizio will receive stations in your area.

Next, I connected a Panasonic Blu-ray player to the VMB070 and tried out The Dark Knight and Beauty and the Beast on Blu-ray, and Star Wars: Episode IV on DVD. The picture was surprisingly sharp for such a small image, but the LED backlighting was too bright at the Standard setting, and the Vivid option was out of the question, being entirely too bright. I had to fiddle with the third picture option, Custom. I fiddled for a long time, adjusting the brightness, contrast, and LED brightness until I achieved something close to the desired result -- but the color was never quite right. The Vizio’s Color settings seem to control only intensity of color -- but as I increased that intensity, images began to take on pinkish hues. This was particularly noticeable with Beauty and the Beast -- the gorgeous reds I’d seen on my 57” Samsung plasma display were now merely maroon. The Dark Knight and Star Wars: Episode IV, with their more subdued color schemes, fared much better. Still, these problems may have been exclusive to the review sample; other people have reported getting good color from the VMB070.

The sound was very anemic. On its own, the Vizio had no more volume than my iTouch, and that’s not much. Plugging in headphones helped, but even then I could make nothing sound thunderous. The Batmobile might as well have been a baby buggy, the Beast a mouse. The only solution might be to plug in a powered speaker.

I didn’t have the proper connectors to check out the video cable connection, and no USB stick full of photos to try the JPEG setting. In that mode, the Vizio acts like a photo frame, displaying your photos as a slide show or individually. Reports have it that, for now, the VMB070 can display only JPEG photos, but that updates might make it possible to view MP3 files.

The battery life is pretty dismal. I think you’d be lucky to get through The Dark Knight on a single charge.

I found the Vizio VMB070 infuriating to use. Its switches and screens are unfriendly, the audio is almost nonexistent, and the touchscreen system is far inferior to most others out there. The picture, though sharp and clean, didn’t display a full range of color, and the tuner was quite fickle at picking up TV stations.

In an age that has given us good video via our smart phones, iTouches, and other personal systems, the Vizio seems something of a dinosaur. True, given the right location, it will tune in free OTA HD, but before long we’ll no doubt have powerful Wi-Fi that will allow us to access our video without any antennas at all. And we’ll be able to access it with receiver-TVs that are truly personal and portable. The Vizio VMB070 requires so many extras (headphones, powered speakers) to make it work that it scarcely seems portable at all. It should work reasonably well for someone who needs a portable set to pick up OTA signals -- just be sure to test that finicky tuner where you live, so that you’ll know you can pick up enough stations to make it worth your while.