About ten years ago, I reviewed the One For All Cinema 6 learning remote control. This very basic learning remote cost only $25, but with it I was able to control all of the components of my home-theater system. As that system grew more complex over the years and new components were added and old components removed, I grew weary of constantly having to reprogram the Cinema 6, and reverted to using the original remotes supplied with my components.

For the past few years, Harmony remote controls have been making a name for themselves as some of the most versatile and easy-to-use on the market -- in 2006, we awarded the Harmony 880 a SoundStage! Network Product of the Year award. The 880 has since been replaced by the Harmony One, which is widely regarded as one of the best remotes now available. However, all of this functionality comes at a price; the 880 cost $249 when available, and so does the One. However, Harmony has an extensive line of remotes at a wide range of prices, including one of their latest, the subject of this review: the Harmony 300 ($50 USD).

Before those of you familiar with the Harmony line get too excited, note that, unlike other Harmonys, the 300 is not “activity-based.” Jeff Van Dyne summed up activity-based remote controls perfectly in his review of the Harmony 880: “you press the button that describes what it is you’d like to do, and the remote turns everything on and sets it to the appropriate input. What most contributes to making this work is the fact that the 880 tracks which components are turned on and which input each is switched to.” In short, you can program complex, multi-command activities into other Harmony remotes, but not the 300. The 300 does support one activity with a dedicated button, Watch TV, but this turns on only the TV and one other user-specified device. The 300 can control a total of four devices.

On the surface, the Harmony 300 might look like any other inexpensive learning remote, but it has one major advantage: an extremely intuitive programming interface. Programming it does require a USB connection to a PC with Internet connectivity, but in addition to being very easy to use, this grants access to Harmony’s online database of codes for a reported 225,000 devices made by 5000 different brands. This simplified user interface, called My Harmony, is exclusive to the 300.

Being an inexpensive, entry-level model, the 300 lacks the LCD display of other Harmony models and its buttons aren’t backlit, but they’re logically laid out and easily differentiated by their different shapes and sizes. The 300 has the same ergonomic shape as other Harmony models, such as the One; the buttons are easy to find and press. Two AA batteries and a USB cable are provided.

Programming the Harmony 300 was simple and straightforward. It requires going to the Harmony website to download the My Harmony software and set up an account where your settings are stored. Although I found the interface easy to use and a great advantage in simplifying setup, programming the remote does require that the remote be connected to a PC that is signed in to your My Harmony online account. After installing the software and creating an account, I easily found in the Harmony database all four of the devices in my home-theater system that I wanted to control -- a JVC HD-56FC97 RPTV, Oppo BDP-83 Blu-ray player, Asus O!Play HDP-R1 media player, and Anthem Statement D2 A/V processor -- and downloaded their codes.

The Harmony 300 then required some further reprogramming and tweaking. For one thing, not every command for every device was available in the database, and others were available in the downloaded data but were not assigned to a particular key. For a few commands that did not exist, the process was simple: I told the My Harmony software that I wanted to create a new command, typed in a name for it that wasn’t already on the list, then pointed that component’s original remote at the 300 and pressed the button for the command that was being learned. You don’t have to immediately tell the My Harmony software which button on the 300 you assigned to that command; the new command is simply stored in a list for that device, to be later assigned to any key. Once you’ve downloaded all the commands you want, assigning them is a simple process of dragging commands from the list and dropping them onto the keys of an image of the 300. I found this visual method of programming extremely easy to use -- and if you forget which command is assigned to a particular button, just position the cursor over that button and the corresponding command will be displayed. 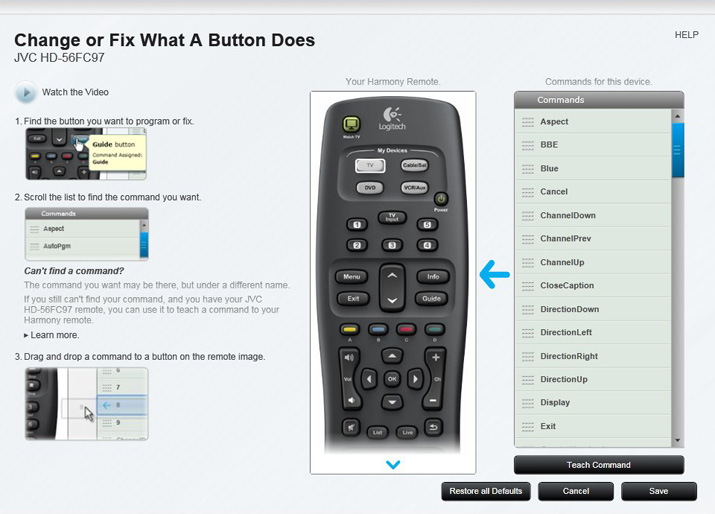 It took me less than an hour to complete the Harmony 300’s initial programming. Over the next few days and weeks, I experimented with the assignment of several buttons to find an arrangement that seemed most intuitive to me. Although programming was a simple matter of dragging and dropping commands, some might find it tedious to have to connect the remote to a PC with an Internet connection every time they want to change even a single command. This was not a problem for me; my laptop, which acts as the media server for my system, resides on the coffee table in my listening room.

Once I’d programmed the Harmony 300 to my satisfaction, using it was simple and convenient. At first, I kept all of my original remotes handy, thinking I might still need them, but using the 300 soon became second nature; eventually, I put away all other remotes and used only the 300.

Some of my components seemed overly sensitive to commands sent from the 300. For instance, when I pressed the button to select an input on the Anthem D2 or a media file on the Asus O!Play, they would sometimes overshoot the intended input or file and go on to the next. To avoid this, I had to press and release the buttons quickly. This was mildly annoying, but I quickly adapted to it -- and the Oppo Blu-ray player and JVC RPTV never exhibited this behavior.

Although my system includes a Sony PlayStation 3, the Harmony 300 couldn’t control it. This wasn’t the fault of the Harmony -- because the PS3’s remote uses Bluetooth technology, no standard infrared (IR) remote will work with it. Logitech does sell a Bluetooth adapter for their remotes to use with PS3s, but it costs an additional $60.

The Harmony 300 had plenty of sensitivity and range. I sit about 9’ from my equipment rack, and only had to point the 300 in the general direction of a component to reliably send commands to it. The ergonomic design of the 300 is superior to that of any of my components’ original remotes -- I found it very comfortable to hold and use for long periods. And having only a single remote was a welcome change from the pile of them that used to inhabit my coffee table. In short, the Harmony 300 provided all the functionality of my original remotes in a single, easy-to-use unit.

As already mentioned, I don’t typically use universal remotes, so I had no others on hand for comparison. I attribute much of my aversion to universals to the complexity and effort required to program them, but I can’t imagine that programming a remote could be any easier than it was with the drag’n’drop interface of the 300’s My Harmony software. According to Pamela McCracken, Logitech’s senior manager of global public relations, the My Harmony interface may be used for other Harmony remotes in the future.

At times, I wished that the 300 had true activity-based commands so that, for example, I could switch from listening to music streamed from my computer to watching movies on my Blu-ray player with the touch of a button. Without activity-based commands, this action required selecting the source, powering it up, selecting and powering up the receiving components, and then setting the latter to the correct inputs. If you want an activity-based remote, Logitech offers models starting as low as $100, but with this increased functionality inevitably comes increased complexity in programming. The Harmony 300 may lack all the bells and whistles of its bigger brothers, but it provides most of their functionality along with a simple and elegant programming interface.

Logitech has many models above the Harmony 300 that should suit the needs of those who require a fully featured, activity-based remote control for a complex A/V system. But if all you need is an inexpensive, basic universal remote that can control up to four components and is incredibly easy to program, the Harmony 300 is an excellent choice. Though I wasn’t a big fan of universal remotes before I started this review, the Harmony 300 won me over with its ease of use. It has found a permanent home in my system.