Apple’s iPods and iPhones must be charged to work properly, a fact that has spawned a whole family of products generally known as iPod docks. You see them everywhere these days, and most have three things in common: they look cheap, they sound awful, but they do charge up an iPod or iPhone.

Imagine my surprise, then, when I removed from its box the Logitech S715i rechargeable loudspeaker and iPod/iPhone dock ($149.99 USD). It didn’t look cheap. It was a solid piece of work without a rattle or squeak. It was like picking up a 2.5-pound brick.

The S715i is 15.25”W x 5.25”H x 2.36”D and shaped rather like a reclining peanut. It struck me as being similar to styles used for automobile systems, with a transparent, fine-mesh grille that gives an easy view of its drivers while fully protecting them. At the center is a smooth plastic lid that, flipped all the way back, reveals the dock while providing a sturdy easel that holds the speaker upright, tilted slightly back. Four rubber feet offer protection from scratches and scuffs to any surface on which the S715i is placed.

The S715i is described by Logitech as a “trayless dock, works with any iPhone or iPod with a Universal Dock Connector.” A 3.5mm jack on the back of the S715i lets you connect an iTouch via the latter’s headphone jack. You can also use this jack to plug in a portable CD or DVD player, or almost any other portable player.

On the front of the S715i are four buttons, two each to the left and right of the dock: one for power, and one each for volume up and down; the fourth is a dummy that balances out the design. On the rear, next to the auxiliary jack, is an inlet for the power cord. These two inputs are hidden under a sturdy tethered rubber plug that fits tightly yet is easy to pull out and put back in.

The S715i comes with a power cord and transformer for charging its battery and/or powering it with wall AC. Also included is a light canvas carrying case, thoughtfully designed with a separate compartment for the power cord and transformer, and a very small remote control that looks and feels cheap. It’s easy to lose, and controls only the very basic functions of a docked iPod: Play, Stop, Skip Forward, Skip Backward, Shuffle or not, Volume, and Power on/off. If you want to change albums or artists, you’ll have to walk over and do so via the iPod’s own screen.

Inside the S715i are eight drivers: two 1/2” tweeters, two 3” cones with Neodymium magnets, and four passive radiators, two facing front and two facing back, to aid the bass extension. 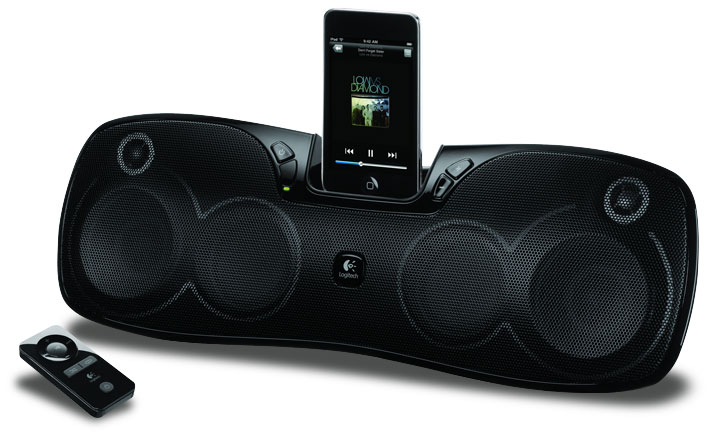 The S715i is impressive in its simplicity. You just flip the easel stand down, plug in the power cord (or not, if it’s already charged), dock your iPod or plug it into the auxiliary jack, and turn it on. Logitech claims that a full charge will last eight hours, but this will of course vary with individual use. I like music loud, and so was able to get only about six hours out of it, which is still quite respectable for a rechargeable nickel-metal hydride (NiMH) battery. A docked iPod will charge while the speaker is plugged into AC, but not while the S715i is operating on battery power. A light just below the dummy button on the front tells you your battery’s charge status: green = better than 40%, orange = 5-40%, and red = less than 5%, or time to recharge.

Though somewhat large for a portable, the S715i is small enough to fit just about anywhere. I placed it in a half-dozen different places in my home and it fit right in. It’s small enough to be packed in a suitcase, a backpack, or its own canvas case, and taken with you wherever you go -- but I have another use for it. My house is in a wooded area in which there are frequent power outages that last six to eight hours. My iTouch is always charged thanks to an IDapt charging station. Were I to keep an S715i charged at full strength, I could hook it up to the iTouch and have quality entertainment that would make a blackout pass far more quickly.

I placed the S715i so that I could sit in my usual listening chair, and turned the lights out. Without my eyes bringing me back to reality, I could have sworn I was hearing much larger bookshelf speakers. Hearing is believing, but I’m still almost incredulous at the rich, full sound the little S715i could produce. It sounded better when plugged into the wall -- it played louder and had more bass -- but even running on battery power, it was the little speaker that could. By using separate drivers for different frequencies and placing the two tweeters at either end, Logitech has achieved enviable levels of clarity and transparency.

There’s a limit, of course; the S715i won’t be mistaken for a pair of floorstanders, as it can’t possibly reproduce the full bass of larger, separate speakers, and while its stereo separation was impressive, it couldn’t replicate the separation, and thus the soundstaging, of a pair of speakers across a room. And while it could play plenty loud for most uses, there was a cutoff point that made its overall dynamic headroom lower than that of most separate speakers.

I jumped the S715i through a lot of hoops, beginning with my favorite demo recording, España, with Ataulfo Argenta and the London Symphony Orchestra (CD, Decca 466 378-2, transferred to iTouch as a high-quality Apple Lossless file). The S715i did well by the title work, Chabrier’s colorful tone poem. The opening pizzicato notes were solid, the bubbling woodwinds and harp were clear, and the cymbal stroke was bright, with just the right amount of edge. Perhaps it was the S715i’s rear-facing passive radiators that gave the sound of the full orchestra a noticeable amount of depth and the bass drum its solidity, even if the latter lacked the physically felt thump it has through my MartinLogan speakers.

I then turned to “Keepin’ the Road Hot,” one of my favorite songs by the Nitty Gritty Dirt Band, from their Hold On (CD, Warner Bros. 25573-2, ripped to Apple Lossless): guitars all had the right amount of edge and clarity, drums had punch and definition, voices had good tone and definition, and the bass had solidity and fine focus. At this point I plugged in a Memorex portable DVD player that I’ve used with headphones for those frequent power outages, and popped in Spellbound, one of Charles Gerhardt’s series of Classic Film Scores (now out of print), and cued up Miklós Rózsa’s music for The Lost Weekend (CD, RCA 0911-2-RG). The strings were lush and lovely, sweet yet with dramatic edge; the entrance of the chorus, singing wordlessly, seemed to personify the distraught sense of this film’s alcoholic protagonist, as the brass snarled from the rear of the orchestra. Once again, I was surprised at the depth of the S715i’s soundstage.

My confidence in the S715i was fortified by these experiences. I then tried something more intimate: “Moanin’,” from Karrin Allyson’s In Blue (CD, Concord CD 2106-2). In the opening double bass solo, the only buzzes I heard were those in the original recording, and Allyson’s voice had good presence and definition. The drums sounded as if they were behind the singer, yet had good tightness and clarity. The sound was intimate not only because the forces were smaller, but also because it revealed a good many nuances of performance with an arresting transparency for speaker system of such modest size and price.

For its size, the Logitech S715i is an amazing-sounding product that raises the performance bar for portable speakers. If you need a speaker for your iPod, are more concerned with good sound than with bells and whistles, and can put up with or are unaffected by the docking and remote-control limitations mentioned above, the S715i might be the portable speaker and docking station for you. It can’t give you the lease-breaking bass of larger speaker systems, but its midrange and treble are crisp and accurate, and unlike 90% of the speakers it competes with, it looks solid and impressive while sounding clean and clear. And it will charge your iPod, too.